What is Cinnabar Opal?

Hi,
I''m new to this forum, and I have a question that I hope someone will be able to help me with. I have a couple of pieces of material that I was told is "cinnabar opal". It appears to be common white opal with pink streaks where it was stained by cinnabar. Now, when I do a search for cinnabar opal, I am told it is called Myrickite or Opalite. I have a piece of Myrickite and it looks nothing like the cinnabar opal. When I googled Opalite, I find it is also called Tiffany stone. I also have a piece of Tiffany stone, and again, it looks nothing like the cinnabar opal.
I am still trying to figure out how to post pictures, but I''ve attached a picture of the ''cinnabar opal''.

Real Myrickite is rare stuff and this image shows what it basically looks like. It''s red cinnabar (mercury ore) in chalcedony, not common opal. It comes from a small number of specific locations. I have a couple of small stones from the Idaho deposit and they''re similar but not identical. The cinnabor in all Myrickite is bright red.

Your stone is what''s called "cinnabar in opal" or "cinnabar in opalite." "Opalite" is a term that''s used rather loosely to describe virtually any common opal that doesn''t show play of color as precious opal does. Cinnabar in opal can display a wide range of color, from material like yours to a solid brick red.

In the past some have raised health concerns about wearing cinnabar of any kind next to the skin. Personally it doesn''t worry me: the amount absorbed by the body even over a long period will likely be much less than the amount I received from many mercury-silver amalgalm tooth fillings and the large amounts of pure mercury I played with as a kid. So far, no problems and I''m well past the age of worrying about whether I''ll die young! But health decisions are always personal. 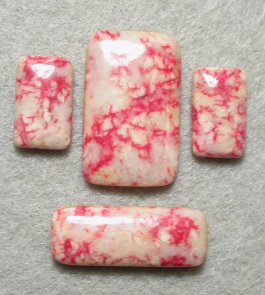 Hi,
I forgot to answer the question about "Tiffany stone." It''s another attractive common opal that''s said to contain both opalized fluorite and beryllium. It goes by a number of confusing names: Bertrandite, Ice Cream Opal, Purple Passion, and several others.

The image shows a stone I cut some time back that''s fairly representative but it can also occur in browns and blacks, pink and white and other colors and mixtures. Good material from a large beryllium mine in Utah is hard to find: most goes into the ore crushers. Because of its varied colors and patterns it''s become quite popular with cutters and jewelry designers. 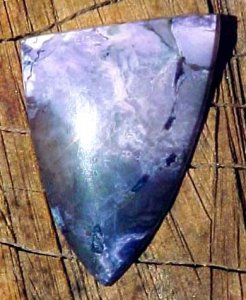 Hi Richard,
Thanks for your help. I want to be able to give any potential customers as much accurate information as I can, and I was getting very confused! The material I have that was called myrickite doesn''t look like the stuff you pictured, so now I have to wonder what it is? The Tiffany stone I have looks similar enough to your picture that I feel confident we have the same material. 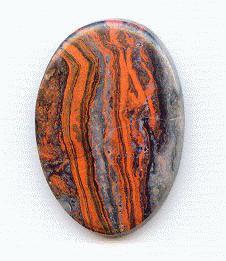 The myrickite umbrella might be big enough to cover your stone -- definitions are very vague and are often stretched to fit specific cases. Here''s what gemstone authority John Sinkankas had to say about it:

"Clear chalcedony, dotted with bright red inclusions of cinnabar...has been called ''myrickite'' in honor of the discoverer of this material."

Shipley''s "Dictionary of Gems & Gemology" even stretches the definition to include opal:

"A name used for whitish or greyish chalcedony, opal or massive quartz marked by or intergrown with pink or reddish inclusions of cinnabar, the color of which tends to be brownish. The opal variety is also known as ''opalite''...English originally listed it as a variety of chalcedony, showing red spots on a gray ground..."

The term ''opalite,'' of course, is used very broadly to describe many different common opal colors and phenomena, even cat''s-eye opal. So I guess you can shop around to find an "authority" whose definition describes what you have! I''d add that among those supposedly "in the know" I''ve never heard the term ''myrickite" used to describe anything but chalcedony with red cinnabar.