ok, I am back with the engagement story and I will add some more pictures.....
so, we left for Riviera Maya, Mexico on March 3rd and headed to the resort. I had originally found the Gran Bahia Principe Tulum while looking for a place to hold our destination wedding. We found a great deal for the week we were planning to go on vacation, so we decided to go for it.
While we were walking around at the resort, I kept saying that the place was perfect, and pointing out how perfect the pictures would be, etc.
The second day we were laying on the beach, and I brought it up again, and my df says, "yeah, now we just have to get engaged" and I said, "yup" still hoping he had brought the ring. (I had been keeping my eyes out for any sign of a ring or my df acting suspicious- but nothing- so I was begining to wonder if he hadn''t brought it along.) so then he says, "too bad I didn''t bring it along"
WHAT? I didn''t say anything much, just said quietly "you really didn''t?" trying to hide my dissapointment. He then procedes to tell me that he was planning to ask me on my birthday (which is April)- well I couldn''t hide my feelings anymore- I had told him when we first started looking at rings that I did not want to get engaged on any holiday or my birthday because I didn''t want to be upset on every holiday that I wasn''t proposed to. My df is the worst secret keeper ever also, he tells me everything and can''t keep a straight face so I was begining to think he was serious. Throughout the day I kept saying "I can''t believe you were planning on asking me on my birthday! "He kept saying he was sorry and didn''t remember me saying that (which is also wierd, because he remembers everything)
at one point, he was trying to make a joke and said "well I thought that way I wouldn''t have to buy you a birthday present
We went to dinner and stopped at the bar to have a drink, I had pretty much calmed myself down and convinced myself that he hadn''t brought the ring to mexico- still thinking what a wienie for being "too scared to bring it to Mexico"
when we were at the bar my df was being kind of distant and just quiet... I asked him what was the matter and he said "I don''t know, I didn''t sleep very well last night, I''m kinda edgy, you want to go back to the room?" ok... it was only about 8 pm- but I was kind of tired also.
Ok, RATED R now...
we head back to the room and decide to take a bath. I get in first, and after about ten minutes of waiting for him I say "are you coming?" he''s like, yeah I''ll be right there...."
A few miniutes later, he gets into the tub and we are just relaxing, but he seemed uneasy...
He says, "since you didn''t want to wait until your birthday," and starts reaching for his shorts next to the tub, and pulls something out of his pocket-
he had wrapped it in paper towel and taped it with medical tape and then taped it inside the pocket of his shorts and had it in the carry on. He knew if he had it in the box I would find it!
I made him get out of the tub so that he could get down on one knee and ask me to marry him....
but if anyone in our family were to ask... we got engaged on the beach! HA! 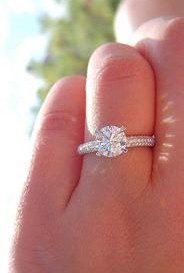 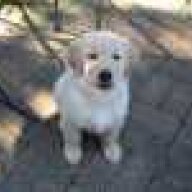 Beautiful! Congrats to you both

boys are so sneaky and mean when they do something nice for us.

Haha, love the story! Good job for him being able to keep it a secret as long as he did! Medical tape is creative. 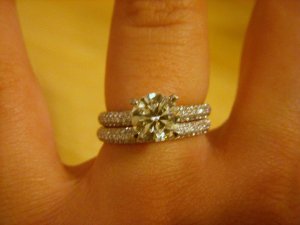 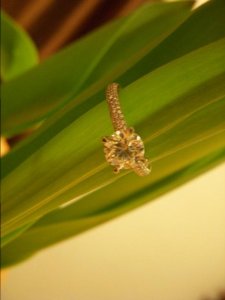 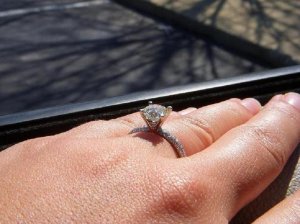 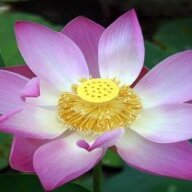 That is gorgeous and how wonderful that you were surprised!!!!!

Congrats on your engagement and beautiful ring! Woohoo!

Yey so happy for you! That ring is so gorgeous! I laughed so hard when you said "he proposed on the beach" hahaha. That is just too cute and funny.
Engaged 10/21/09, Getting married 4/30/11!
"When you realize you want to spend the rest of your life with somebody, you want the rest of your life to start as soon as possible."
-When Harry Met Sally 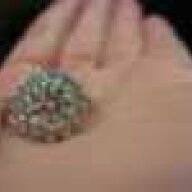 Congrats!!! Beautiful ring and great "beach" proposal! I love it!!
I''m so glad your not waiting impatiently anymore

I love your ring.

Congratulations, what a beautiful ring!

I love your ring.

It''s making me re-think a plain solitaire for my reset...
Click to expand...

No kidding! Everything Bia said x2!

Congratulations - the ring is BEAUTIFUL

Love your story and ring!!! I thought I always wanted a plain band... but your pave bands are amazing... do you know the designer? Love it!!!

Too funny! I love your x-rated proposal! Your ring is gorgeous! Congrats!
~~~Thanks to PS, my wants far exceed my budget!~~~

Congratulations! The ring is gorgeous

Oh my gosh! We need to make a sticky in the proposal forum for guys to NOT do X rated proposals because then you have to lie the rest of your life about the proposal! Very funny, though! Congratulations and your ring is gorgeous!!!