I'm looking for a home for my .28 oec. I'm not sure what this setting type is called, but it is common in vintage rings, where round stones are set in a squared setting, like in this picture, but there are many variations. Has anyone seen a pendant set like this? Also, where would be the most likely place to find vintage pendant settings? It's easy to find antique settings for rings, but not for pendants, and I'm not sure why that is. 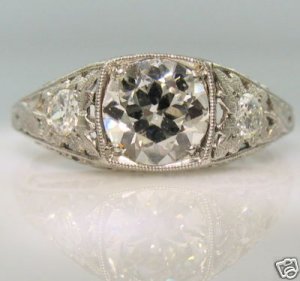 In smaller stones, they''re often called illusion settings, though they usually are a little more metal-intensive than this one in your pic. I''m not sure it necessarily applies to larger stones, though. Also, I''m not sure that the term is terribly universal; I''d probably just bring in a pic if you''re trying to describe the type of setting you want to a jeweler.

You''re totally right that pendant settings are incredibly difficult to find. I have one, and it is pretty much the one and only solitaire style pendant setting I''ve seen in 10 years of working at an antique mall that has some estate jewelry. It also sat in the mall for more than *five years* unpurchased, til I finally caved, but I guess that shows that they''re not terribly popular at the moment. Not sure why! I don''t think I''ve taken it off except to clean it since I got it.

Thanks, LGK. I''ve e-mailed my jeweler to see how much it would be to have a setting like this custom made. If it''s too expensive, then I will probably go with the buttercup setting. Maybe he''ll surprise me and tell me he has something antique in stock . . . .

Have you posted photos of the pendant that you mentioned?