I'm only new to the world of coloured stones but I am well and truly hooked. There is one stone in particular that I have lusted after since I first saw a post about it, Vanadium Chrysoberyl. I've been hunting for one for months and I've finally bought one! I absolutely love the colour and its the perfect shade of mint green.

Knowing how rare these gems are, especially over the 2ct mark... would you consider getting it recut? The stone has an asymmetric cut and all sorts of tilt windows and half extinction. I'm not sure if most of this will disappear upon setting the stone. I'd love to hear your thoughts.

These are some fairly terrible photos taken with a mobile phone. For some reason the photo shows a lot of gray and there is no gray at all in person. The stone is also more lime green with blue flashes rather than the dull green shown in the photographs.

Office lighting, next to my sapphire engagement ring 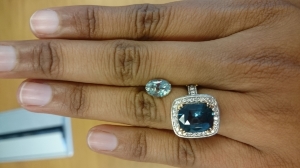 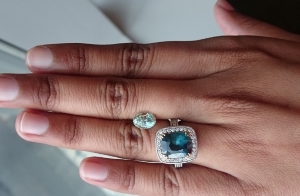 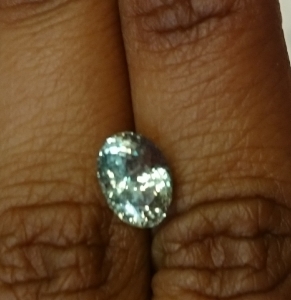 Outdoors in the shade, closest to real life colour 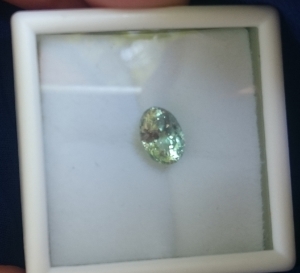 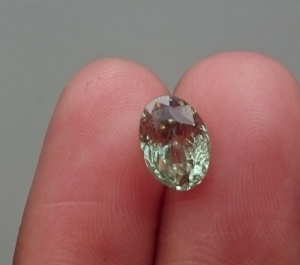 And just because this beauty deserves a photoshoot 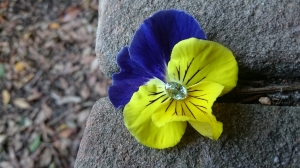 No advice on the recut but I love the subtle mint colour of your chrysoberyl!

Contact Jerry Newman to get his professional opinion. It is very likely that the sacrifice is to great to recut.
Sometimes the mind ignores what is logical because the person cannot accept the reality of what it is.
S

Chrono said:
Contact Jerry Newman to get his professional opinion. It is very likely that the sacrifice is to great to recut.
Click to expand...

You said it's the perfect shade of mint green. That alone worries me because often times more than a very, very slight pavilion tweak can change the color of a stone. But yes, I'd definitely contact Jerry!

I think it's a very special gem, congrats!! I think if I were you I would probably leave it as is. It may be something you can live with, especially once set. This is something I've struggled with quite a lot, with one of my gems in particular.

If you do contact Jerry, please let us know what he says. I'm very curious. I'm in the same boat as you are, with a gem that has similar issues in cut/weight/size - but mine is a mint garnet. Mine is also an oval, similar dimensions to yours, and 2.12 cts. It has a weird windowy effect going on, almost a zig zag window. It also has a very saturated and glowy color, one of the best mints I've seen, so I'm very hesitant to recut it. I admit that it's partly bc the value loss, if it goes under 2 cts, would be great (and I paid what I consider to be a lot for this gem - and of course it had a big price jump bc it was over 2 cts).

I've had Jerry successfully recut a gem in the past so I'm not sure why I've been so hesitant to ask him about this one, and I've been avoiding setting this gem for over 1.5 yrs now while I try to decide this issue, lol!! I hope you can decide on yours sooner than it's taken me

I would play around with it extensively to try to see how it might look once set (I use foil for this). It may be that setting will mask some of your concerns, but if it doesn't seem to be the case, then I would at least touch base with Jerry. A lot of it is very mental, whether or not you can be happy with it as is. I've resisted recutting mine bc I tend to think that the right setting would help it a lot. Then I change my mind AGAIN and think "but it would be a perfect stone with a recut!" So I'm probably no help, but at least I can thoroughly understand your concerns 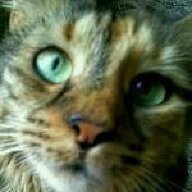 Was waiting to post this after I finished work. Mine went from a 1.48ct to 1.16ct with 21% loss but same face up size. If it bothers you like mine did, I agree with the rest that you could ask Jerry - he was very helpful.
Hope this helps with your decision.

Here's a phone pic of mine after recut: 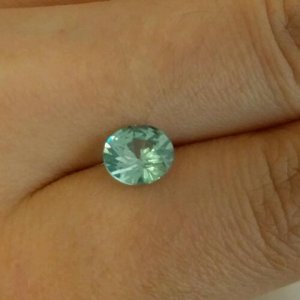 Here's a phone pic of mine after recut:
Click to expand...

Elyxia I love your stone! It looks great, and I love the color!
C

Thank you all for your replies. I took the stone to a reputable gem cutter locally and his opinion was that a recut would result in too much carat loss for only a small difference to the appearance. As it is, the colour is beautiful and after playing around with it a little bit I think that i could find a setting that would minimize the windows. It will be a little while before I have the budget to set it though.

Thank you for the update. Most stones are cut to maximize weight, colour, and everything else so very few stones are good candidates for tweaking, and it looks like yours is the same case.
Sometimes the mind ignores what is logical because the person cannot accept the reality of what it is.
You must log in or register to reply here.
Be a part of the community Get 3 HCA Results
Jewelry Blog