I bought this necklace in Minori, Italy about a year ago. It's pretty heavy (The pendant), the chain is mediocre, probably put on independently from the pendant. I'm Italian myself, and have NEVER seen this symbol. The man also had another, similar pendant, this one was nicer. He said it was from "the '20's" but I think he wanted my 15Euros. I was wondering if anyone knew what this was/where it's from/how it could have gotten to the Amalfi Coast? Mostly, I'm curious about this history of this piece, as I get so many compliments on it! Any input would be awesome. Thanks so much! 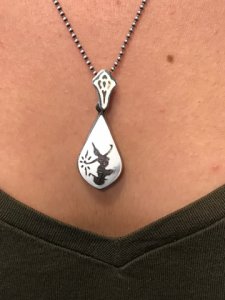 Your necklace is an example of "Siam Sterling." Your piece is enameled, but more often these pieces are silver and black.The information below is from Charles Dittell, the author of "An Overview of Siam Sterling Nielloware."
---
"History: These silver and black Thai pieces were popular in the 1950s through '70s, and were produced by a variety of jewelry shops. It is technically "Niello" or "Nielloware", created by carving out areas of the silver, and baking a sulfur/metals powder in the carved out areas. The design often displays Mekkala, the Goddess of Lightning, and represents the Thai version (The Ramakien) of the Buddhist and Hindu Indian legend, Ramayama, about a prince, his wife, his parents (King and Queen of Siam), and the evil king of Ceylon. This jewelry was often sent to American wives/girlfriends from their soldier-husbands/boyfriends on leave from fighting in Viet Nam, or stationed in Thailand during the Viet Nam war.

Note that the term "Siam" was used on these items from the early 1930s well into the 1980s (even when Siam was re-named Thailand). The term was used to represent the "Thai craftsmanship community.""
---
Nice necklace --- enjoy!
M