Timing has never been good for me!

I must have really bad timing. Last year I agreed to be a bridesmaid two weddings (Sept 2012 and an Aug 2011 wedding that just recently got rescheduled to Oct 2012 ...

). Now I am engaged. FI and I have been planning a 2010/2011 engagement and a 2012 wedding for a while. FI is in the Oct 2012 wedding also, and one bride and one groom from each wedding will be in our wedding party. We are a few years older than these couples and ready to get a move on, so we don't want to be engaged much longer than a year. We also want a summer or fall wedding. However, we do feel we will need at least 10-11 months to save up, so we can't do a wedding much sooner than July. We also don't want to burden the other couples by interfering with their weddings by scheduling ours during those months. Both couples have had VERY long engagements (two years+) so I feel kind of bad scheduling my wedding before theirs, but I asked both and they are fine with FI and I having our wedding at the end of July or early August. We have not set an exact date, but for the reasons stated we needed to push it up to at least the beginning of August. That gives the next bride at least a month before her wedding without having to worry about mine. Well now another friend, who is not even technically engaged, but has been planning her wedding just announced (on FB...

) they set the date for middle of August!

A good thing is I won't be in her wedding party, so it's not another one I have to plan for or spend much money on, but I'm afraid of looking bad when I announce that my wedding will be mere weeks before her wedding. I don't really feel comfortable going to her with my plans because we're more like acquaintances, but I am friends with her SO. Actually he is my ex BF (ex from back in the day who is a long time friend in our group), so my relationship with her has never been stellar. Am I going to be perceived as "just trying to get married first?" Do you guys think this is something I should worry about or not?
**former lurker** ;P 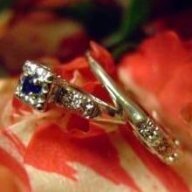 So, I think you need to stop worrying about what everyone else will think/say/do, because weddings bring out the KA-RAY-ZEE in even the sanest of people, and others will think/say/do things that you never would have imagined, even when you thought you did something innocuous, like choose chicken and fish for entrees or choose pies over a wedding cake.

You bring up very good points. I try not to worry what others think, but it's hard for me. I need to tell myself there's always going to be something with someone, right? Especially when I already tread lightly around her, she may be easily offended by anything I do, so I shouldn't let anything specific get to me. You're also right that my true friends already knew I was planning for July/Aug. Word will probably just eventually get back to the other bride that I was already planning around that time frame anyway. If I had all the money and time in the world I would just have my wedding tomorrow, so I'm definitely not trying to rain on anyone else's parade!

The sane/crazy thing is completely true too! I am mostly sane, but went a little nuts waiting for engagement

Thanks for your advice
**former lurker** ;P 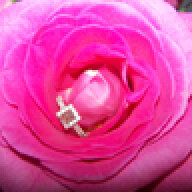 I don't mean to sound rude, but if you don't have a stellar relationship with the groom, and you don't get along with the bride particularly well, why are you even planning on going?

Honestly, you can't let the schedules of other people dictate your wedding. You'll be waiting forever if you do.

When DH and I were engaged, SIL called him and asked what weekends in March were available b/c she wanted to visit. He tells her that we have our precana retreat the first weekend and that my best friend's wedding was the last weekend. What does she do? A week later she announces that she's engaged and that her wedding will be the last weekend of March (mind you it's January), and pitches a fit when DH tells her we're busy. DH ended up going to SIL's wedding at MY insistence and I went to my best friend's, which is probably what SIL wanted in the beginning. (We don't have a good relationship ) Everyone eventually got over it. Mostly. Well, we would have if that had been the end of her drama (She also decided she didn't want to be a bridesmaid 5 months before my wedding and then showed up in a dress that was very similar to my BM's dresses

but that's a separate story.)

I had to schedule our wedding knowing that SIL's hubby would be deployed, and that there was a very good chance my own brother would end up being out at sea. (He's in the Navy.) I just couldn't wait to get his ship's deployment schedule (It ended up working out anyway and he was able to come

), and I definitely wasn't going to wait another 6 months to a year for BIL to get home to get married. They both understood.

Point being, sometimes you can't even work around close family, so why worry about acquaintances?
Beth

Well, QueenB29, like I said, I do get along with her SO as I have been friends with him half of my life. Him and I used to be roommies (more people in the house than just us), but I guess since we all got our own places with our SO's we haven't been as good at getting together. She is the acquaintance, not her SO. He is an old friend of mine. I guess I should have explained my weird situation a little more. So the issue is not that there's another wedding I have to go to (I mean I assume they would invite me, but I guess you never know), just whether or not it would be rude for me to announce that mine is one/two weeks before theirs or if everyone is going to be judging me because of it....

BTW your SIL sounds like a PITA! I have an ex BF (different ex) who's sister was a B that despised me. That was so awkward. I'm glad I get along with FI's sister She is in our wedding, but if she quit as a bridesmaid and then showed up like that I would be so PO'd!!! Probably something that my ex's B of a sister would do

His mom was a wicked witch too, if I had married him she would probably have worn white to my wedding!

I really don't think you should worry about it. The guy won't care, most likely, and you should not care what the fiancée (not even, right?) thinks. Anyone who thinks or talks about that you're trying to upstage anyone just has too much time on their hands.
Now a Mrs.! 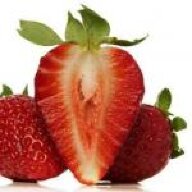 mscushion|1316465359|3020897 said:
I really don't think you should worry about it. The guy won't care, most likely, and you should not care what the fiancée (not even, right?) thinks. Anyone who thinks or talks about that you're trying to upstage anyone just has too much time on their hands.
Click to expand...

My only other piece of advice is to not act like you're doing something wrong. Because you're not. But if people get a whiff of apologetic off of you, they'll act like you've done something you need to be apologetic for.

Good advice! Thank you all!

Ah, OK gem_anemone, I think I misread. I for some reason thought that you and the groom didn't get along so great anymore. I stand my my advice, though. You should schedule your wedding on the date that works for you and your fiance

And yes, my SIL is a total witch. AND my MIL. The wedding stuff is only the beginning of a very loooooong list. Sigh

My feeling is that you need to have it either 2 weeks before the august wedding or 2 weeks after- so you can allow honeymoon time for the other brides....

sucks, we were in the same boat this summer as all our friends were getting engaged last year and we had our wedding on July 1, a friend's on July 23rd, another friends on August 6th, another friend on August 27th.... and it goes on this way until Dec!

Now I have another family member that just got engaged, but I have no clue if they plan to marry next year or not. Ugh... I guess it's inevitable that when I plan my day it's possibly going to interfere with someone elses plans....FI and I won't be picking a day/venue until at least Nov or Dec, so I guess that's what we get! *sigh* Oh well at least I get to marry this wonderful man soon and everything else is just whatever!

I think as long as you give the other couples a few weeks before and after their weddings, you can schedule your's whenever you want. I've been to 6 weddings this summer and many of the guests knew all of the couples! I think people usually think about these things too much. People know you are planning a wedding, most won't be surprised when its in the summer.

As far as the ex's wedding goes...I don't think you should be surprised if the bride vitos your invitation. I sure didn't want DH's ex at ours!

mscushion|1316465359|3020897 said:
I really don't think you should worry about it. The guy won't care, most likely, and you should not care what the fiancée (not even, right?) thinks. Anyone who thinks or talks about that you're trying to upstage anyone just has too much time on their hands.
Click to expand...

My only other piece of advice is to not act like you're doing something wrong. Because you're not. But if people get a whiff of apologetic off of you, they'll act like you've done something you need to be apologetic for.
Click to expand...

Big ditto to SB's post and the others who say to not worry yourself. I especially want to reiterate the bolded part above. You are not doing anything wrong, so don't let them think that you feel that you are!