I''m a newbie to this site, and have been reading as much as I can find about the virtues and (many!) drawbacks of Tiffany. Hate to rehash this again, but I have a cuople of questions hoping that the veterans here can help me - at least point me to threads I might have missed so I can read further.... and, it IS "almost" Friday!!!

So, my lady is one who is just entirely captivated by the Tiffany-blue box thing - she has a good head on her shoulders but she''s also had her heart set on her proposal being a "tiffany moment" since as far back as she can remember.

Not wanting to disappoint her, and *knowing* full well that for the same (or even inferior) stone at Tiffany I have to pay a huge premium, what can I do to get the best possible stone I can at Tiffany? I''m in the market for "ideal" cut, ~1.5c, "F", VS2... the price I''ve been seeing is in the mid $20K''s at Tiffany.

I suppose you could ask them to bring in a couple of rings that have stones with your specs so you could choose the better of the two, maybe?

You are sweet to want to please her, even though it will cost you.

I don't know what your timeframe is but if she doesn't have "engagement fever," (

) I'd recommend stalking www.signedpieces.com -- Winternight just ordered a ~1.0c Tiffany from them. Of course, your luck will depend on if something gets listed with your specs, but if you strike it lucky, you might just end up saving a bundle.

Get a ring from a PS Vendor, put in a Tiffany's box.

Get a bigger ring, or better yet save the extra $$$ (and it is a lot of money) for a down payment on a house, college fund, future jewelry gifts, etc.

Long-term, she'll appreciate a bigger ring or the extra money a lot more than having "T&Co." stamped underneath her ring.


Edit: I am kidding about the box (deception is never good), but not about the rest of the post.
P

I was in Tiffany''s yesterday and saw a ring (6-prong Tiffany solitaire in platinum) that was priced at $34,500. The specs were 1.57 F VVS2. The salesperson said the price will go up soon within the next month or so.

It is awesome that you want to get your bride to be a Tiffany ring. But I think it depends on whether size matters to her. If she doesn''t mind that she can get a rock twice the size and of better quality then I say go ahead and pay the premium. If not, I highly suggest looking elsewhere and maybe having a replica of a Tiffany design done for the setting. I was looking at a 1.77 ct Tiffany ring with a melee halo around it and it would have been around $40,000. I had an exact replica made by Leon mege with a stone my fiancee bought that was 1.85ct and the total cost was $19,000 Here is the link https://www.pricescope.com/community/threads/worth-the-wait-my-new-leon-mege.54041/ Good luck!
AJL
W

Why not get her a diamond eternity band from Tiffany that she can wear as a wedding ring with an engagement ring you get from a PS vendor? That way she gets her Tiffany moment and also a nicer ring. 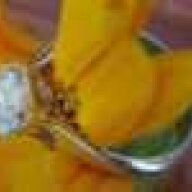 Hello, Donald.....congratulations on your upcoming engagment!

Last summer, upon inquiry from my DH as to what I would like for our 35th anniversary, I decided on a Tiffany Lucida. This may not be the cut you are looking for??? But, it IS Tiffany, so I wanted to respond.

I had in mind a "kind-of-budget" of around 15K or so. It wasn't a strict figure, as my DH is generous, but I wanted the Lucida cut as much as anything in the Tiffany Lucida mount and had wanted one of these since it's introduction in 1998....I just had not pursued it until now. So it was exciting to me!

Called Tiffany and asked for an SA....we do not live close but were planning to be close to a store within weeks. The SA gave me some information on qualities and prices, which fall into what's been posted here. 1 ct F VS1-2 for around 15K....or a slighter weighter stone, say 1.15 H color, VS2 for around the same amt.

So, for the money I would have ended up with a very pretty one carat Tiffany Lucida and been a very happy Lady!

BUT, then, I dediced to contactl Signed Pieces just on the idea that they might have something. There was nothing on their site, so I left an email inquiry.....

About two weeks later I received a phone call.....

It was Santa Clause calling a couple of months early

in the guise of David at Signed Pieces....

Signed Pieces was great to work with.....I recommend them as an option should you decide to pursue your Lady's Tiffany dream.
Susi

Donald, here is a picture of my Tiffany Lucida from SignedPieces.... 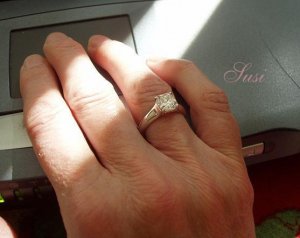