The Worst Way To Be Proposed To

When Shawna Blackmon’s boyfriend didn’t show up to the downtown Mobile, Ala., restaurant by 8:30 p.m. on Friday, she was
slightly irritated. Blackmon had arrived with her hair and nails done, expecting a nice dinner date.
When Daiwon McPherson didn’t answer his cellphone, Blackmon’s annoyance shifted to worry. Maybe he had been in an
accident, she thought.
A short while later, a mutual friend called her: McPherson, who was a member of a motorcycle group, was being chased by
police — and had a gun with him, the friend told her.
“I always feel like I have to protect him,” Blackmon told The Washington Post in a phone call Tuesday. “I felt like I can fix this
and just protect him and make sure that nothing happened.”
So Blackmon rushed over to a nearby Exxon gas station, where her friend said McPherson was, along with other members of
the biker community.
There, she found three Mobile police officers surrounding McPherson and his motorcycle at a gas pump, with what appeared
to be guns drawn and pointed at her boyfriend.
“Get on the ground!” one officer yelled at McPherson. “Get on the ground now!”
Blackmon rushed over as McPherson removed his motorcycle helmet and knelt on the ground. With her left palm, she
motioned for the officers to back away as she put a hand on her boyfriend.
“Get his gun from him!” one officer ordered her.
“I will,” Blackmon shouted. “Back up. I will.”
She would later say she was so focused on helping that she didn’t realize that the officers were holding stun guns, not real
guns.
“I was just trying to get the gun from him to make sure that nothing happened,” Blackmon told The Post. “I just wanted to
make sure that he was okay. I felt like I could de-escalate it, talk to the officers, try to explain [everything].”
The fact that they were surrounded by most of McPherson’s friends from the biker group — a couple of whom were recording
the encounter with their smartphones — didn’t strike Blackmon as out of the ordinary either.
“Friday night is always bike night,” Blackmon said. “I wasn’t suspicious at all. It was a normal night.”
By the time she turned to face her boyfriend again, McPherson was pulling a small box out of his inside pocket. Suddenly, the
officers began cheering and clapping. Blackmon, stunned, covered her face with her hands and started to cry as she realized
what was happening.
McPherson asked her to marry him. She said yes.
“I was overwhelmed with everything that was going on that day,” Blackmon said. “When I realized that he was actually
proposing, I was just happy that he took so much time and effort.”
McPherson said he had been planning the unusual proposal for more than two months. The Alabama couple has been together
for more than five years, and McPherson said their daughter had already “spilled the beans” that he had bought a ring, forcing
him to step up his game.
“I had other ideas but the other ideas were clichéd, and she would have known that I was getting ready to set her up,” he said.
“I had to be creative, because any time I’m acting outside the box . . . she knows.”
McPherson visited the Mobile Police Department earlier that day to request their help. He didn’t know anybody there but, as a
tattoo artist with an independent shop in Mobile, he said he has met many officers.
“I just went and talked into them at the last minute and just shot them my pitch, like, this is the only way that she’s going to
believe that it’s real,” McPherson said. “I said, I need you guys’ help — and maybe, just maybe, we can help each other because
you know there’s a lot of videos on the Internet that’s portraying officers in a negative light.”
This one, he told the officers, would “end with happiness.”
“They were all for it,” McPherson said. He said Terrence Perkins, a Mobile police spokesman, asked “a lot of precautionary
questions” about safety.
McPherson assured him all of his biker friends would know this was a staged arrest. He also advised them to let Blackmon feel
in control of the situation.
“If you grab Shawna, she’s going to go crazy,” McPherson said he told them. “If you grab me, she’s going to go crazy.”
The unorthodox proposal was captured on video by two of their friends and posted to Facebook. Within days, the videos had
been collectively viewed more than 10 million times and attracted thousands of comments online. Some have wished the
couple well, cheering such an unique approach. Others have criticized the setup as unnecessarily traumatizing and a tragedy
waiting to happen.
McPherson said he never meant to offend anybody or imagined that the proposal would have gone viral in the way that it has.
“I would say I’m sorry if y’all took this in the wrong way,” he said. “I did not set this up to make a mockery of anybody. I was
just literally trying to get the best proposal that I can and make this a memorable night that she will never forget. … They
saying it’s not romantic but everybody’s different. If [a traditional proposal was] what she liked, that’s what I would have gave
her. I know that that’s not her.”
A spokesman for the Mobile Police Department did not return a phone call Tuesday morning.
Perkins told the Guardian that none of the stun guns were loaded and that no guns were used. The assistant police chief had
approved the idea earlier in the day, and on-duty officers in the area were informed about the staged proposal before a fake
radio call went out, he added.
“At no time was he placed in any danger or anyone on the scene,” Perkins told the paper. “It actually showed us outside the
capacity of writing tickets. It showed that we do have a human side as well.”
Click to expand...

The cops were really good sports for doing this but gosh I would have HATED to be that guy's girlfriend!!!!

I guess it works for them... If I was put in that position, I'd be dead right now. I would just DROP DEAD!

I'm sorry, I would be so pissed if my boyfriend did this to me.
M

Some people really thrive on that emotional roller coaster stuff.
A

Some. people. He'd be far too high-maintenance for me. I can tell.

He obviously knew her well enough to know she could handle it. They have a kid and have been together 5 years. I thought it was great but I am used to cop humor. A positive interaction between a PD and its citizens.
What others think of me is none of my business.

I usually think women are so over the top when they complain about how they were proposed to. Yeah, that is definitely taking it too far IMO lol. But I mean, she probably would have bitched about it if he had done it in their house or something 'boring', so I guess it works for them. Men specifically are facing SO much pressure to make sure it's the best proposal ever (pinterest and social media have made this 1000x worse).
M

redwood66|1481734328|4107180 said:
He obviously knew her well enough to know she could handle it. They have a kid and have been together 5 years. I thought it was great but I am used to cop humor. A positive interaction between a PD and its citizens.
Click to expand...

I understand that many familiar with that lifestyle would find it humorous, no problem. But he stood her up for their date and then scared the shit out of her. Not my personal idea of a romantic proposal. More a very realistic sample of what her future holds, and if she's cool with that, then that's great. I don't know many women who would be willing to take that on, but I know they exist, and I know they could kick my ass.

Can you imagine how they'll announce the first child???

Can you imagine how they'll announce the first child???

What even happens at birthday parties???

Just when you think you've read everything..... 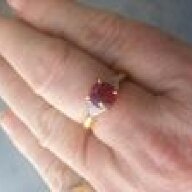 The worst proposal in literature, worse than this one, I think, comes at the end of "A Monstrous Regiment of Women," By Laurie R. King, when Sherlock Holmes reluctantly agrees, against his better judgment, to wed Mary Russell after he has given her a concussion to keep her safe at the end of the final chase scene. (She does get to hit him back.) Otherwise I love the series!
Boerumbiddy

It's one of those things that makes me think they must lead verrrry different lives from me because if someone called me and told me the cops were chasing my husband and he had a gun, I would just be terribly confused, in disbelief, and if convinced would probably just sit tight and call a lawyer. If I thought he might come to our house, I would go somewhere else and then call a lawyer. And other than that I would stay well out of it! I wouldn't rush down to the scene of the standoff and tell the police to step back and let me take care of it! If you're dumb enough to have the police chasing you, I'm not going to come save your ass from your own bad decisions, lol. If then he came and was like "but I was going to propose" I'd just be like "nope, the end, goodbye!" IF the relationship was going to be saved SOOOOO much therapy would be necessary. Like I said... obviously a very different life!

I hope the ring was big, very big!

This exactly, lucky someone wasn't accidentally tasered or shot, then it probably wouldn't have been quite so cool for them....

The tasers were not loaded and no guns were used if you read the article.
What others think of me is none of my business.

This reminds of another article I read a few years ago about a guy who faked a car accident and his own death to propose: