The Lost Art of Political Civility

There is a lovely article in "The New York Times" on the lost art of political civility. It features a large photograph, taken just a day or so ago, of Presidents George W. Bush and Barack Obama with their wives at the opening of The National Museum of African American History and Culture. I had read that the Bushes were very polite to the Obamas when they moved into The White House, but I did not know how much the relationship had prospered. I have been struck at what I had thought was an improbable friendship that was struck up between former Presidents Clinton and George H. W. Bush, one that started when they teamed up for fundraising efforts, once both were out of office. The Obamas' and younger Bushes' friendship was unknown to me, however. The photo below has been widely circulated.

Here is an excerpt from the article.

"WASHINGTON — Maybe it was the unexpected warmth of the gesture, the sheer enveloping display of affection.

Maybe it was his response, the beatific expression on his face, eyes almost closed, head tilted toward her shoulder.

Maybe it was the moment: tenderness at a time when presidential politics has become a festival of cruelty.

But when Michelle Obama hugged former President George W. Bush on Saturday, at a ceremony to open the National Museum of African American History and Culture, the image quickly took flight online.

However one chose to interpret it — and overinterpretation is a hazard in such exercises — it became an instant metaphor. Some saw the lost virtue of civility in politics; others, the unlikely friendships that blossom at the rarefied heights of public life. To critics on the left, it was a shameful case of political amnesia by the wife of a president who spent years cleaning up the mess left by his predecessor.

Mrs. Obama and Mr. Bush have had a few such memorable moments. In July in Dallas at a memorial service for five police officers killed by an Army veteran, the two held hands while singing 'The Battle Hymn of the Republic.' When Mr. Bush began swaying to the music, Mrs. Obama gamely let him swing her arm back and forth. At one point, as the choir sang 'glory, glory hallelujah,' he turned to her in a burst of enthusiasm, causing the first lady to crack up, despite the solemnity of the occasion.

In June 2012, when Mr. Bush returned to the White House for the unveiling of his official portrait, he aimed a few wisecracks at President Obama. But he saved his best material for Mrs. Obama, reminding her that when British soldiers set fire to the White House in 1814, another first lady, Dolley Madison, rescued the portrait of the first George W. — as in Washington.

'Now, Michelle,' he said, gesturing to his own painting, 'if anything happens, there’s your man.'

Some of these encounters are explained by proximity. When the Obamas and the Bushes appear in public together, protocol dictates that Mrs. Obama stand next to Mr. Bush. Some of it is a function of the former president’s playful manner, which by all accounts has become more playful in his retirement.

But some of it also has to do with the relationship between the couples, which current and former officials say has deepened over the past seven and a half years, both because of the shared bond of living in the White House and because of Mr. Bush’s decorum as an ex-president.

'President Bush was very gracious to us during the transition, and he has been unfailingly gracious and respectful since,' said David Axelrod, a former adviser to Mr. Obama. He recalled the president telling him that the Bushes 'had taught him lessons in how to be a former president.'

Mr. Bush has studiously avoided criticizing Mr. Obama or his policies. And Mr. Bush has lent his presence to occasions that meant a lot to the president, like the 50th anniversary of the civil rights march in Selma, Ala., when Mr. Obama delivered what some believe was the finest speech of his presidency, on race relations in the United States. Mrs. Obama sat next to Mr. Bush on that day, too, frequently leaning over to talk or share a laugh with him." 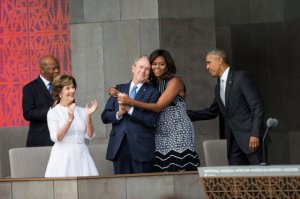 I truly love that photo. I saw it on Facebook yesterday and just could have cried. The message I got from it was "we are all in this together." A very loving and accepting and tolerant moment that will doubtlessly be shared again and again for many years!

At the end of the day, it is sometimes difficult but always possible to remember that we all share an agenda of biological survival here on this planet. This photo was a representation and certainly a metaphor of that, as the author of the article states. My philosophy is this: we are the same when we are born as when we die: perfect, afraid, innocent, hopeful. The true beauty in life lies in the in-between. All of the mistakes and messiness from which we learn and grow while we muddle through those in-between years? That's the sweet spot of it all. And what a fabulous and crazy and exciting and fun ride it is! Who'd ever have thought that Michelle and George Jr. would be captured on film sharing that moment? Crazy, right? I love it.

Well said monnie. I love this pic and wish I could read the entire article.
What others think of me is none of my business.

I'm afraid that civility in general has become a lost art.
"I never met a diamond I didn't like."
No jewel is as beautiful as a cat's eyes.
Madam Bijoux (Gabrielle)

Despite political differences, they are both decent sets of people, so it's probably not surprising. I can't see the Obamas or the Clintons hugging Trump on the other hand.

arkieb1|1475286025|4082540 said:
Despite political differences, they are both decent sets of people, so it's probably not surprising. I can't see the Obamas or the Clintons hugging Trump on the other hand.
Click to expand...

Really? They're looking pretty cozy to me. 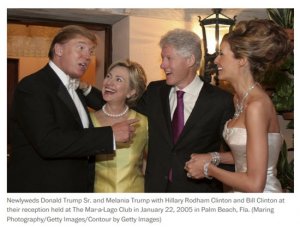 Yep in the olden days when Trump supported the Clintons, do you see it happening now going forward? I guess he might hug her again, I doubt he would hug Obama....

I guess we'll just have to watch the "show" and find out.
The truth is incontrovertible. Malice may attack it, ignorance may deride it, but in the end, there it is." - Winston Churchill​
You must log in or register to reply here.
Share:
Facebook Twitter Reddit Pinterest Share Link
Be a part of the community It's free, join today!
JEWELRY BLOG