Tanzanite bought in the middle east

Hi everyone I have a couple of questions,

I recently bought 4 x Tanzanite pieces, all oval shape for what seems like a pretty good price per carat. Pieces range from 3-5 carats. Cost me between $500 and 800US per stone. All of them came with certifications however the "quality" of the tanznite type (AAA or otherwise is not on the valuation) Whats your advice in regards to this,

Do i get back to Australia and have them revalued / for insurance and then
a) sell them on (if so whats the best way, online or through private jewellers in the street) or
b) keep them as investment material considering whats been going on with Tanzanite prices (i.e. they are rising)?

A few thoughts for you:-

1. If you sell gemstones, you're highly unlikely to recoup your costs. Gemstones (unless very rare or highly sought after) very rarely hold their value or increase over time. There are exceptions but unfortunately Tanzanite isn't one of them. There's a plethora of Tanzanite on the market so market prices have dropped and/or remained stable in the past few years.

2. Typically top quality Tanzanite sells for around $450 per carat - depends on where you buy from though and whether it's loose or mounted and, of course, size.

3. There are a number of gemstones that masquerade as Tanzanite that aren't. You need to make sure you have the gemstones checked by a competent appraiser for (a) the RI and (b) to ascertain whether they've been coated or not - some have unfortunately and then aren't worth anything and (c) the quality.

4. Price per carat will depend on size, clarity and most importantly colour. Here's a link to a website that sell very good Tanzanite and you can benchmark yours against those. http://www.lapigems.com/tanzanite.asp Basically the darker and more blue they are the better. Pale, light violet stones are in plentiful supply and can be picked up for hardly anything.

I hope that's answered your questions. Good luck in whatever you do with them.
M

This is interesting and surprising ... something to think about... you've definately made me stop buying 1-2 more before I get back..

Thanks for your reply,

Found this little snippet........May 2011 on www.Kaisilver.com : "You hear it on the TV channels, tanzanite gems are about to become extinct. You hear these stories all year round and every year, how the price of tanzanite stones is about to surge. Some of these sleek marketing campaigns even ask you to 'invest' in Tanzanite gems. Somewhere in this marketing hype is a bundle of lies and exaggeration. Yes, Tanzanite is not as common as apples and grapes, it is not likely to become cheaper than a pack of peanuts but, there sure is a lot of it around.

Though you often hear of the Tanzanian government's intention to stop the export of rough tanzanite, your eyes tell of a different stores. Hundreds of kilos of rough Tanzanite are piled with deep pocketed rough gem buyers in India and probably in parts of China too. The hoarded stock of rough Tanzanite is huge, some is resold as rough while some is cut and polished and fed to the gem and jewelry markets. With a few traders control the supply of rough tanzanite, it is not hard to 'create' scarcity stories and whip up a market frenzy.

When it comes to cut and polished Tanzanite stones, there is once again a huge supply with various gem traders across the globe. The demand for Tanzanite has has it's ups and downs in the past few decades, when the price falls traders who do not have stiff financial backings are forced to sell at cheaper prices. But a tanzanite gem traders who is well cushioned financially can weather the storm and hold on to stocks. It is true that some tanzanite gem dealers often over-invest in Tanzanite gems as the price shows an upward movement, but a stronger purchase effect against a more gentle price rise is bound to leave the trader in a bit of trouble.

TanzaniteOne is one of the largest investors in Tanzanite mining and gem supply. The company report in May 2011 that there is enough of rough Tanzanite in the mines to last for a few decades. Just remember that rough tanzanite that has already been mined and is currently in the posession of Tanzanite dealers is large in volume too. Add to this the supplies of cut and polishd tanzanite also waiting to be sold and you will realize that, there is not much worry regarding scarcity issues. The market itself is able to balance things by a periodic slow down and even a slump in the demand for Tanzanite. A rough equation would say that it might be around 80 to 100 years before there is no Tanzanite available in the mines.

Tanzanite is a gorgeous gemstone no doubt about that. Buy a tanzanite gem or a tanzanite gemstone jewel if you like this gem. Take good care of it and treat it well, but don't go spending your savings on 'investing' in Tanzanite, the big price appreciation might never come about. It is also possible that the fall in the supply of tanzanite might be accompanied by a similar fall in demand! Not something those TV channels would want you to realize but, it's true all the same. "

www.Kaisilver.com
These gems have life in them: their colors speak, say what words fail of. ~George Eliot
M

Thanks guys, luckily i got the headsup from you two before I got suckered in ...

Tanzanite One's CEO Wessel Marais said: “With responsible mining and careful digging tanzanite deposits can last over a hundred years.”
These gems have life in them: their colors speak, say what words fail of. ~George Eliot

While on this topic, is it worthwhile in investing in gemstones / diamonds? Rather than chasing this up via the net and getting more BS fairy answers I thought I might you guys this...

I think there have been a number of questions about this, and the typical answer is the same as what is posted above.

But some people feel that if you have a well balanced portfolio, and want to leave some form of alternative asset wealth to develop into the long future, coloured diamonds might be a good route. I guess that might apply to other rare and commercially viable items like really high grade mogok rubies and kashmir sapphires as well as alexandrite if you have a 20 year timeline.

But you still have to first recover the margin that dealers, retailers & wholesalers are earning now, plus the loss you'll make in the future reselling, so it is a chancy route. It would be ok if they were ridiculously fine gems which you can auction to an international wealth market, but those are gems with typically 7-8 figure prices. Which means you'll need a 8-9 figure net worth to buy them as part of a balanced portfolio.

Thats another thing..I bought a blue diamond (no doubt coloured but still looks great approx .85 of a carat) at the same place and 3x white diamonds of a smaller size to make up a birthday gift / ring for my partner when I get back..will defiantely be valuing the above before making a ring for them..

Please have those diamonds checked out as well to firstly be sure that they are indeed diamonds, not synthetics or simulants. Secondly, for lack of treatment (irradiated, filled or others). Thirdly, to assess the quality.
Sometimes the mind ignores what is logical because the person cannot accept the reality of what it is.

In terms of white diamonds - synthetics and simulants are always a possibility unfortunately.

Bear in mind, if the price is too good to be true, there's a reason.

With fancy coloured diamonds (even larger ones) there's still a risk. Who knows what will happen to the market. You can't predict and things go in and out of fashion.

With coloured gemstones, rare gemstones i.e. Alexandrite, Paraiba Tourmaline etc., do hold their price and have increased over the past 10 years (but only for excellent, verified examples - not stuff you can buy on Ebay or in a normal high street jewellers). However, will they hold their value if there's another find in the next 20 years and suddenly the gemstone floods the market? Highly unlikely. The risk with gemstones is that they could be rare one minute and then in plentiful supply the next!

So the morale is only buy if you intend to keep, wear and love.
M

I will update when I have the stuff valued, once I'm back in Oz end of next week. Will be interesting ......

Be careful who you take your gemstones to for valuation. Make sure they KNOW what they're talking about. One poster (no longer part of the forum) used to take his gems to a small appraiser who gave him horrible over-inflated, valuations and appraisals and they were clearly incorrect technically also. If you're in Oz, it might be worth starting a separate thread asking the other posters from Oz who they use. That way at least you won't be throwing your money away.
You must log in or register to reply here.
Share:
Facebook Twitter Reddit Pinterest Link
Be a part of the community It's free, join today!
JEWELRY BLOG 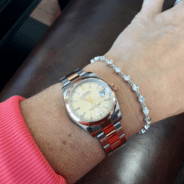