Summary of my e-ring buying experience and proposal: WhiteFlash

I proposed to my gf. on July 3rd. Today is actually our 2 year "anniversary". We went out on a "date" on this day 2 years ago. We watched Tomb Raider on July 8, 2001. Both of us are movie nuts and I've to admit Tomb Raider is more of my type of movie. So, she agreed to watch TR if I would accompany her to watch Final Fantasy - The Spirits Within. Who am I to complain right? 2 dates

Coincidently, TR2 is coming out on July 25th. If it came out last week, it would have been better

Anyway, I had originally plan for a picnic and proposal with a portable DVD player playing a compilation of our photos over the years and a bottle of wine which I custom made the label.

Unfortunately that didn't work out and I decided to propose in a restaurant instead. This was suppose to be the restaurant:

It tied for number 1 in food in Zagat 2002 survey. Unfortunately, the restaurant took the week off

So, what I ended up doing was creating a menu of my own (I love cooking) from soup and appetizer down to the main course and dessert. I took 1/2 off work, got home early to shop for the ingredients and to cook of course. I slipped the menu into her bag the morning before and asked her to look inside when I realized she hadn't notice it by lunchtime.

Well, she got to within 3 steps of opening the box in a matter of an hour. So, I had to make her stop trying!

Anyway, after dinner we sat down by the couch and exchanged gifts. She gave me mine first. I got the watch I always wanted, an Omega Speedmaster automatic.

She then opened the puzzlebox (she had figured out how to open it before dinner but she promised me she wouldn't look inside). At the same time I gave her the bottle of wine (which has the custom label asking her to marry me). She read the message aloud and at the end, I open the ringbox and asked her to marry me and she said yes.

Actually she had guess I was going to propose. So, this wasn't a big surprise to her.

Now to my ring buying experience. When I came on this board, I didn't know if she would prefer a Tiffany ring or not. Well, asking that question here as well as my preference for a smaller 0.5ct D/E IF/VVS1 quality provoked a lot of *hostility*. I won't get into all that now. But instead, I'll focused on what I ultimately ended up with.

I finally bought a 0.8ct E VVS1 H&A from WhiteFlash. When I searched for D/E/F IF/VVS1 ~0.8ct I found approx. 3 diamonds - GoodOldGold, SuperCert and WhiteFlash. Jonathan aka Rhino at GOG was extremely helpful. His website is not up to par compared to SuperbCert or WhiteFlash IMO as I prefer a more professional looking website. But others might like his as it is simplier to navigate and it has tons of information that the other 2 sites lack. However his enthusiam and responsiveness is top notch. His diamond is a 0.79 F VVS1.

Next is SuperCert. I talked to Barry once over the phone and found him to be very pleasant and professional. I mentioned to him I liked this diamond I found on his site and would like to get the best price he can offer me. He gave me a price and offered to hold it for me for a week. That diamond was a 0.85ct G VVS1.

Finally, there's WhiteFlash. I didn't have a good vibe with them initially. I PM Lesley but I didn't get a response (she later e-mailed me explaining why). I finally e-mail Bob Hoskins aka dimonBob and began working with him. He has been very helpful and accomodating as well. I've asked him for information and many many requests and he took care of them in a timely matter. WF even agreed to hold the diamond I was interested in buying for 2 weeks for $100 on my credit card. This diamond is a 0.8ct E VVS1.

For these 3 diamonds, I had asked each vendor to give me a best price quote and once I got their final price, I didn't try to negotiate a lower price (well, to be fair, I might have in passing conversation jokingly but I did feel their prices to be reasonable).

Armed with the 3 prices and diamond info, I seek the assistance of Rich Sherwood as he comes highly recommended in this forum. I had originally wanted to retain his services to appraise these 3 diamonds. He was more than willing to give his professional opinion based on the dollar amount and the sarin data on the 3 diamonds. The intention was to narrow down to 1 or 2 diamonds and have him evaluate it rather than having all 3 evaluated as it would have cost me shipping for 3 diamonds back and forth as well as the appraisal fee.

Now, all these according to him are excellent diamonds as well as other very useful information that I could use to decide.

In the end, I eliminated the 0.79 F VVS1 from GOG. Jonathon was a great guy to work with and I would love to buy from him. But the decision was made to either go with the best (WF: E VVS1) and pay more or save some money (SC: G VVS1).

Here is where the events took an unexpected turn. I e-mailed Barry at SuperCert as well as dimonBob at WhiteFlash letting them know I'll can't decide now and I'll be checking local stores and see what I can get for the amount of money I'm looking to spend. At the same time, I also let Rhino know that his diamond was out of the running.

I can only assume Barry misunderstood my intentions and he wrote an e-mail back to me. I still have the e-mail from 2 months ago and I was going to *publish* it here but I thought it over the 2 months and decided not to. My subsequent e-mail to him went un-answered including one that I asked if he would be willing to send his diamond to be evaluated by Rich Sherwood. I guess he's done dealing with me or the diamond has been sold (I couldn't find the diamond on the site anymore about a week after all these happen). SuperbCert has very good reputation on this site and other buyers reported excellent experience dealing with him. So, I won't bad mouth him as I truly believe it was a mis-understanding. My only advice is if you as a buyer is un-decided look elsewhere and when you are ready to buy, buy it from SuperbCert.

At the same time, dimonBob thanked me for keeping him updated and still considering WF diamond. Jonathon didn't curse me for wasting his time and he too wish me well.

I'll skip my experience at the local stores.

In the end, I decided the WhiteFlash 0.8 E VVS1 is what I wanted and let dimonBob know. When I started this *quest*, I wanted the very best I can afford and E is certainly better than G. I'm sure some posters here might have gotten a G or H and a bigger diamond or even a VS2/SI1. But I still value what the paper says even if my eyes can't see it. The choice of 0.8 is purely superstition. "8" is a desirable number in the Asian Chinese culture. 1.8ct would have been better but I would be spending money I can't afford getting a 1.8ct E VVS1.

They were ready to contact Rich Sherwood to work out the details since they haven't dealt with him before. But I've expressed that I would like to send the diamond over to him for appraisal. At the same time, the strain issue on diamond came up and RocDoc holds a strong stance on this issue. I e-mailed him asking him the price for his appraisal service (also because WF has a working relationship with him).

In the end, instead of trying to decide to go with Rich or RocDoc for their services, I decided to forgo an appraisal for now and trust WF (I'll be getting an appraisal together with my fiancee

The rest of it is pretty routine - going through the setting selection, determing the right ring size, engraving etc.

Lots of thanks to dimonBob and Lesley at WhiteFlash. Much appreciation to Rhino at GoodOldGold and Rich Sherwood for his advice.

And not forgetting the fellow PS members who gave me much needed help.

You can all see the ring here. It is truly a beautiful diamond. Whether we are walking indoors in the mall or outside, the diamond sparkles so much and it is so white!

Link to the ring

Menu, wine label and engraving to follow as well as a photo of it on her finger (when I get a chance).

The wine label file is at home. So, I'll post it tomorrow and a photo of the ring on her finger. 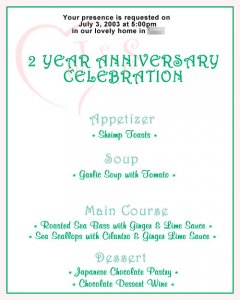 The engraving I wanted but dimonBob says their engraver at WF can't do it. We'll try to find some store locally to do this in the future. 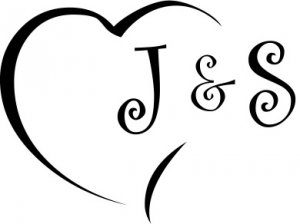 Ah, wonderful story Jlim! Congratulations on a successful end to your quest!
J 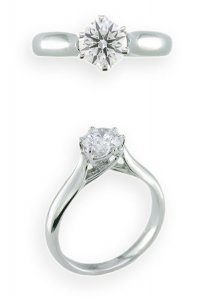 Your stone looks great and I love all the details you put in to your proposal plan. Congrats!
Lanee []

As I already told you, you chose a ***gorgeous*** diamond and a very stilish and beautiful setting!! You're girl is surely a lucky one!

The diamond and the ring looks fantastic! You definitely picked the right one. If given the choice I too will pick an E over a G.

I like your idea of getting vendors to give a best price quote and then take some time to decide before you make a buying decision. But I think some vendors may not realise this and think that you might be holding out for lower prices from them.
Anyway congrats!

I have no problems congratulating a fine young gentlemen on their engagement even if we didn't get the sale. Let me express my hearty CONGRATULATIONS!!!

It was a pleasure working with you J. I think another strike against my stone was the fact that it started with a .7 instead of .8 as you also let suspicion have a major play in the decision making process and .8's D,E's VVS-VS's in excellently cut stones are not always the easiest to get. I'm sure you have a fine rock from WF and I'm happy that your hunt is finally over. Good job Bob.

All the best to you.

congrats, jlim! thanks for sharing your story. you definitely got a great stone and did the right thing trusting the PS guys here.
C

Congratulations! Isn't it funny how women usually have an inkling that a proposal is soon to come? Great story, and your ring looks great. Can't wait to see pictures of it on her hand. Good luck with the wedding plans.

Well Jlim, this has been quite a journey.

Thanks everyone for the compliments.
Sorry no photos of it on her finger yet. Will try to take some tonight as well as the wine label.


fire&ice - coming from you, it means a lot.

caratgirl - wedding plans is not going to be in the near future. Maybe 2-3 years from now.

jlim - Thanks for letting me help you with all your needs. Engineers are always a challenge. I am honored that you selected our ACA diamond.