I just got a 1.10 ct trillion cut Sphene from Thailand. It is absolutely gorgeous with flashes of orange green and gold. It was said to be loupe-cean. But I find a few small scattered parallel lines with a loupe. I have no microscope.

Are these small lines considered to be "normal" and therefore this is top quality after all, kind of like the fine lines in Spessartite?? I did SG and it is right on, so I know that it''s not Strontium Titinate.

I guess what I''m asking, is what group of gems is Sphene in, i.e., how much inclusion or visible stuff is typical for this stone?

I just bought it ''cause it sparkled so. 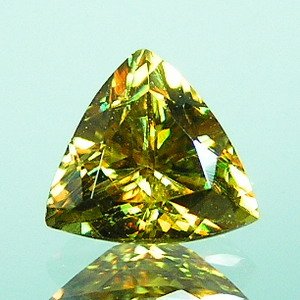 Just wanted to say that you mean Mandarin Garnets have the lines... not spesses

Yes, Mandarin garnet. I have a ring with a Mandarin that has those wispy lines. In fact, the stone was so good looking that I was starting to think that IT was fake. But with a loop, those wispy lines (Tirodite fibers) are seen in one corner. I''ve read that seeing a bit of those fibers is a good thing. It indicates origin, I believe, Namibia (?). Thanks.
Still a newbie, but trying...

Sphene is a titanium-containing mineral actually called titanite...it''s a silicate of calcium and titanium. I''m not sure what the needle-like inclusions are.

"Mandarin" garnets ARE spessartite. Spessartite is the scientific name of a garnet species while "Mandarin" is a tradename like "Scotch" tape or "Campbell''s" soup.

Spessartite is exactly the same mineral whether found in California, Brazil, Burma, Norway, India, Australia, Namibia, Madagascar, Nigeria or the Spessart Mountains in Germany it''s named for. It differs only in the amounts of metallic oxides that give it color (manganese and iron). High manganese = more orange; high iron = more red/brown. (It''s a little more complicated than that but let''s keep it simple today).

The name "Mandarin" was originally applied to certain (not all) Namibian spessartites but was "appropriated" by sellers of Nigerian stones when large deposits of this normally rare garnet were found there in the 90s. Nowadays the name is usually reserved for light pure orange colors of spessartite but it''s widely misused and abused.

The "lines" in the sphene look like they might be rutile inclusions but it''s impossible to say for sure without microscopic examination of the stone. Totally clean sphenes are fairly expensive.

"Mandarin" garnets ARE spessartite. Spessartite is the scientific name of a garnet species while "Mandarin" is a tradename like "Scotch" tape or "Campbell''s" soup.

Perhaps I should specifiy, since I was saying exactly what you are just with different words.

Manderin is the garnet, HIGH END garnet, finer quality orange garnets that are maily found in namibia, while there are indeed all Spessertites, Manderin is the "labeled" product. Better?

Date: 12/12/2006 2:04:05 PM
Author: MINE!!
Manderin is the garnet, HIGH END garnet, finer quality orange garnets that are maily found in namibia, while there are indeed all Spessertites, Manderin is the ''labeled'' product. Better?
Click to expand...

Sorry if I misinterpreted your post. I was only trying to clarity the matter.

Last trip to Tucson I was amused that the Israeli company that originally marketed fine Namibian spessartite under the Mandarin name had a new brochure calling its Nigerian spessartite Mandarin as well. Part of my point was that the name is now being used for spessartite of any color/source, so the Namibian distinction is basically meaningless to the average consumer. It''s sort''ve like the Scotch tape example I used before. The brand name was so successful that all transparent sticky tape is now known as "Scotch" tape. Check out EBay and see what''s being sold as "Mandarin" garnet.

Not a problem Richard, I should have put a wink on the end. I find it a little unnerving when I hear people call any spessertite a Mandarin. Especially many of these home shopping channels that call a spess Mandarin, meaning the color and not the Mandarin stone, many people just do not know, or fall for it thinking that have a bargan.. ah well. 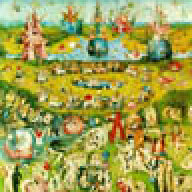 Often times the parallel lines that I have seen in Sphene are from twinning or crystal growth. If anything, this would be an indication that the material is indeed Sphene. Most Sphene tends to be moderately to highly included, so your piece would be what I would consider higher quality. By your provided image, I would venture to guess that your purchase was from a certain ebay dealer who sells a high volume of Sphene at very reasonable prices.

What do you plan on doing with your gemstone?

My Spessartite is a Mandarin color, a rich bright orange in a ring which I love, but sadly cannot photograph to show you. I assumed that it was from Namibia by the fine fibers I found with a loupe, but I don''t know for certain. The stone is 2 cts, from JTV. BEFORE they became the mess they are today. I had gotten a few things from them in the last few months, but sent probably 80% back , so I expanded into ebay, falling, naturally, into the tons of Thai sellers. (I am an inveterate bargain shopper, and am aware of the pitfalls of such).

The only decent stuff I''ve gotten from JTV before I quit, was a handful of Oregon Sunstone, or as they call it Andesine/Labradorite, and a few pieces of jewelry with the green Labradorite. Personally, I think the green Labradorite should be set fairly high to allow a lot of light to hit all sides. JTV just set it the usual way, and it all looks fairly dark. One piece, a pendant, is a true color change, going from green to mahogany red, depending on light source...it''s a fun stone. All stones are 1+ cts. Beyond that I pretty much have given up on JTV.

Oh, I did get a few of the diamond imitators, like CZ, YAG, and titanate from them recently when they had free shipping. I had none of these and I wanted at least one piece of each to compare with other stones if necessary...as in the Sphene. I read on anther site that someone was selling CZ as Sphene, and as you know, Sodium titanate is another imitator.

Anywho, thanks all for the Spessartite lesson.

Thanks for your reply!

This Sphene was touted as highest quality loupe clean. That''s why I wanted to know if the tiny lines were acceptable. It was NOT nearly as expensive as the stones this seller has on right now, mostly with a BIN. I was surprised that I got it for such a reasonable price because all the Sphene (in my limited exposure) I''ve seen advertised was quite included. And from what I can tell from simple testing, this is indeed Sphene and not an imitator, and it is quite beautiful. I think I got lucky.

What to do with it? Frankly, right now, just looking at it is fun...call me simple.

Next to Strontrium Titinate (I have a trillion in a similar size), it''s interesting to compare them, their sparkle and play of color with light. I liked the brightness, the colors, and the fact that it is NOT treated...so many stones are manipulated. Another stone which I''d like to get, in at least 1 ct is Andalusite, which has color shifts...I only have a few small ones. I also have a very small Benetoite and a very small Demantoid garnet. Both of these are also clean, and amazingly bright for their size. Interesting stones, but too small for much.

I know Sphene is too soft for most jewelry.

What do most people do with Sphene? Besides admire it.

I would certainly be happy with your gemstone if it was a reasonable price. If you are truly looking for the highest quality of any gemstone, you can certainly expect to pay a higher price and it would be highly recommended to see the stone in person prior to purchase. In this situation, it sounds as though you got a good price on a very nice stone.

In my experience with setting Sphene and other stones with similar softness/britleness, it can certainly be done successfully as long as you are careful. I would only use it in earrings or pendants as rings or bracelets leave it too vulnerable to damage. I usually set soft stones myself so that I can take my time and be gentle, but if you check around your local B&M''s, you should be able to find a jeweler that will be willing to set the stone (don''t be discouraged if you have to go to a few, many won''t want the responsibility of setting soft gemstones).

My computer monitor (base) is surrounded by gemstones in little white boxes with glass tops.

That''s where the Sphene is right now. I have a row of a little bit of everything: a piece of red Ore Sunstone, a green one, a Mozambique (maybe Paraiba?) tourmaline, a Muzo emerald, my trillion Tanzie, the teeny Benetoite and Demantoid; a nice trillion Melon garnet, a small Apatite (Paraiba look-alike), and a gorgeous large red Mexican Fire Opal (first stone I got from Thailand). My computer is host to a bunch of neat gemstones. I hope it appreciates them.

Oh, and I forgot the batch of various colored sapphires I still have in little plastic baggies from my last foray into gemstones ala ebay ala Thailand.

Among them, there is a 30+ ct Kunzite which almost blew me away...awesome pink. This one I''m keeping covered, lest it fade. I''m not sure if the unheated stones fade!? (this one is supposed to be unheated). Anywho, I like to admire and be surrounded by the stones...I hate to pack pretty things away. Jewelry, obviously would have to be put away, lest I look like a gypsy with jewelry hanging all over my monitor.

This is the seller''s picture of the Kunzite, and the stone is even better! It has a few subtle tiny lines of Rutile, but otherwise...delicious enough to eat. 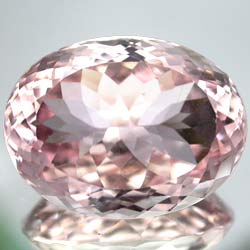 There are NO dark areas in the real stone. It is clear clear clear, except for the little bit of Rutile, which you really have to look for.