Six Prongs Too Much?

I''m interested in buying a platinum six prong setting for a .91 carat H-colored diamond. First of all, will six prongs overwhelm a diamond of this size? Secondly, will color be detectable in a platinum setting? Thanks again for your time.

Six prong settings can be on a multitude of very attractive rings. They provide an added level of security
for your diamond too. But just like every thing else
it boils down to a personal preference.

You should also be fine with an H color in a plat setting
also. H color will still look like a white diamond from the face up position. Just make sure that it has been graded by a major lab, for correctness.

If you're going with platinum, consider a 4-prong.
It's just as secure as 6-prong and allows more of the diamond
to be seen.

H color, no problem. We have set I and J color
in Platinum and they face up white and beautiful.

You should be fine with 6 prong for an almost 1c stone...but a 4 prong does allow more of the diamond to be seen. It's a personal preference though as the look of the 6 prong vs 4 prong is definitely different. Then you also have different style heads for each of the prong settings. When we decided on our prongs we also had to choose between a Tiffany style prong head or a tulip head, basket setting, etc. Certain stone heads hide more of the stone, some show more of the stone.

I would look online at as many pictures as possible and also in person to get an idea for what you prefer. But my personal recommendation is a 4 prong head...either Tiffany V-prong or a tulip which is what we have. It shows more of the stone and if you get a head that has smaller prongs (vs the really large chunky straight prongs that some heads have), you will see more of the diamond which is always good!!

Just my personal opinion, but I actually like the look of six-prong settings better. As previously mentioned, it's a totally personal preference, but I like the way six prongs "frame" the diamond a little bit more than the four. I've seen some four-prong setting that make a round brilliant diamond look almost like a princess cut (especially small stones), while the six-prong settings sometimes help accentuate the "roundness" of the cut. It's a totally personal perception, but it's what I've noticed.

As far as a .91 diamond looking small in a six-prong setting, I personally think that shouldn't be a major concern at all. The six-prong ring I gave my sweetie has quite heavy platinum prongs, but I don't think they overwhelm the .78 ct. diamond at all (especially from the normal "top-down" view). The heavy prongs definitely have a visual impact when viewed from the side, but in theory the ring will most often be viewed from the top anyway.

Some other factors that may be of interest to you:

Although platinum is indeed very durable, for me there was a certain amount of "peace of mind" involved with having the six prongs. Although the chances of it happening might be miniscule, it's nice to know that one prong could be completely ripped right off the ring and the diamond would still be securely held in place, while a four-prong setting would leave the diamond dangling out there waiting to potentially fall out (gasp!).

On the other side of the coin, six-prong rings will collect dirt and whatnot a bit more readily and will be a bit harder to clean. Any open-style setting will be susceptible to this, but those extra prongs only compound the issue.

), here are a couple images of my sweetie's ring. Like I said, from the side the prongs are indeed quite prominent, but I think they make a minimal impact on appearance from above. And as I mentioned, this diamond is a .78 ct., so the impact of the prongs would even be less evident in your case. 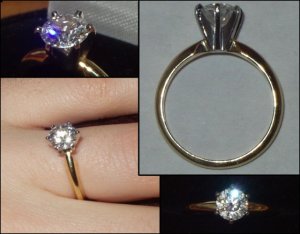 "Economy of words has never been my strong suit"
A

A six claw setting is fine for a .91ct, just ensure the prongs aren't to heavy and your seeing as much of the diamond as possible. Platinum nice choice of metal H colour will be fine.
Alison Mills
Qualified Jeweler
FGAA Gemologist and Diamond Technologist
Registered Appraiser

Will it be better to put a excellent 8 arrows into 4 prongs that wouldn't affect the arrow. Therefore, arrow is easy to block if we choose 6 prongs. Am I right?

Does anyone else have any comments on comparing a 4-prong to a 6-prong in platinum?
I'm looking at a 0.93 carat stone and was leaning toward the 6-prong based on security reasons, but from Barry's comments it sounds like maybe that shouldn't be a factor.
I think Nate made a comment about 4-prongs sometimes making the diamond a bit squarish which was a concern to me as well, but it may be nicer to show a bit more of the diamond. Hmmm...more decisions to make...

I think it's all a matter of opinion and taste. I like both - and I know a few friends who have about a .70 to .75 point round diamond with 6 prongs, and it looks very elegant! I would think one that is almost a carat would look just as good!

Go with your heart!

Thanks for the advice and the info on your friends' settings! I guess that I'll have to agonize over the pictures a bit more...

What about for larger stones? Is the 4 prong still preferred?
the
n o v i c e

Well my great aunt has a 4 ct platinum in 4 prongs. It's withstood the test of time - and totally GORGEOUS!

Diamonds are so pretty in their own right. Why encumber them w/ all that metal?

I'd vote 4 prong, even for a large stone (providing it has no girdle issues).

I agree with Optimized. I really like the 6 prongs on round diamonds because I think it shows off their shape -- especially in solitare settings, and don't hink it hides too much of the diamond at your size. It is completely personal taste, but I think the top view of the diamond is really accented nicely by the 6 prongs, and not "squared off". (I'm not as interested in the side view as I am the top view with all the sparkle, personally.) However, if the setting has side stones and other design elements, the more square look may fit it better, depending on the setting.

If you get 6 prong, get them to be very thin and not obvious. I think it ruins a diamond's look when the first thing you see are the prongs! 6 prong does make a diamond look more round, 4 makes it slightly more squarish...but 4 is less metal and more stone. Or you can get a split prong (8 prong) which adds some design element to the prongs so that you don't just see metal.

just my personal $.02. i also like the look of the six-prong over the four. like everyone says though, it is only a personal preference.

on the practical side, IF for some unforseen reason you broke a prong, with a 4 prong, 25% of what's holding your $5000 stone is gone, exposing an entire side! on a six prong, you'd have to break 3 prongs to be in that much trouble.

just my obersavation and reasons why i prefer a 6 prong.
F

You can minimize the "squared off" look by rotating the prongs in a north, south, east, west orientation.

), so I won't have to worry about any side stones.

The stone that I'm looking has a slightly thick girdle, so I'm not really concerned about girdle breakage.

"on the practical side, IF for some unforseen reason you broke a prong, with a 4 prong, 25% of what's holding your $5000 stone is gone, exposing an entire side! on a six prong, you'd have to break 3 prongs to be in that much trouble."

What I'm really curious about is how likely is this? This is part of my concern...are the odds of this happening very slim or is it a little more common?

Yeah, Mara I remember that you were a fan of the Stuller octet settings with the split prongs...

One of the prongs from my first setting broke completely off, and I never even knew when it happened. The stone was fine and it was a 4 prong setting. It was an 18k yellow gold setting, which after the fact, everyone told us is too soft. We picked out that setting just because we liked it, and didn't even think about the practical issues. (ahh...romance

I don't know how likely it would be with platinum. maybe one of the experts would. There have been several threads about it's "hardness vs strength" lately, which were informative. (I think those were the 2 terms.) You could do a search for those.

hoorray, I decided to play around with different word combinations to search on and found this excerpt from one of Richard Sherwood's posts:
From https://www.pricescope.com/community/threads/platinum-setting-with-white-gold-prongs.2831/
"White gold can "snap", while platinum "gives". Between a strong force and the two reactions, you're better off with platinum, a more durable metal. I've known more than a couple people who have lost their diamond out of a white gold setting, but none (that I can remember) losing it out of a platinum setting." 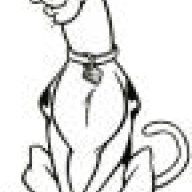 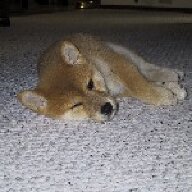 I have also heard some say that a six prong acually makes the stone look bigger? maybe its just because of all the metal around it? is that good or bad?

I think 6 prongs will not be too much for that diamond. It's all a matter of personal taste. I had 8 prongs(bead style) put on a 1.2 carat and it is beautiful. If it appeals to you go for it!

4-prongs is the way I'd go
Why not let your diamond show?!