Not that I had any doubts... I wanted to thank everyone for there advice and opinions on Rocky Talky and share some pictures from the big night. I also want to thank Chris Ray @ WhiteFlash for helping me get the ring quickly and with a few requests that I made.

She celebrated her birthday earlier in the week, but this was the first chance we had to go out. We have a favorite place to eat dinner and another for desert. I set up a late-night desert at a local resturant/ Cigar bar where we first had Valentine''s dinner. We''ve stopped in many times for the desert that she loves, so she suspectted nothing. I had hired a photographer to take some pics of the moment. (A great idea later when she starts quizing me about what she wore, etc...) We ordered are usual desert. When it was ready, a very nice jazy 3-piece band started up the Birthday song. when they set our desert down in front of her, it siad "Will you marry me?" in rasberry sauce. She was very suprised. I made sure her little 6 year old boy was with us too, he''s ready for a brother!!!!! We had some friends join us later to polish off our bottle of wine, while she called evryone. I had a fantastic time. Thanks to Pricescope and WhiteFlash!

Congrats!!! I got teary-eyed reading your post! Very sweet of you to include her son

Do you have pics of the ring?

Congratulations! What a sweet proposal! Thanks for sharing!

Do you have pics of the ring?

.783 G VS1 "a Cut Above" hearts & arrows round in a heavy tiffany style platnium setting

That is a super sweet way to propose! CONGRATS!!!!! 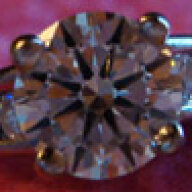