would this setting look ok as a six prong? Are the side stones too big for a 1.07 round? just need some feedback as my g/f likes the look of this setting but im worried how it will look as six prong. i I dont see any verragio settings advertised with six prongs. also does this setting appear to have a really thick width? 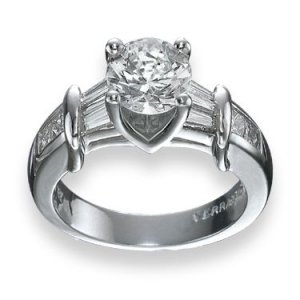 This setting is the eng-0085 . The dealer says that verragio will modify it to make it a six prong and that they wouldnt do it if it would'nt look good. That game me some reassurance. The change to a six prong is a small fee of 75.00 Any opinions?? I think the setting has given me more stress than buying the diamond did!!

I'm a big fan of six-prong settings (that's what I chose for my sweetie's ring), but in this particular case it looks like a six-prong setting might actually interfere with the nice graceful lines of the ring you're considering. While I don't doubt that it's entirely possible they could make an attractive ring for you in a six-prong version, I would ask for some more information about what it will look like before you commit to a custom ring from them...

-Tim
"Economy of words has never been my strong suit"
R

thanks optimized. As I said, this decision has been driving me crazy.
A

Hi there Rockabuy,
Stunning design! I feel this design with 6 prongs will alter the look by making the centre stone more of a feature which may be more desirable to you and your g/f anyway. If your finding it difficult to visualize I would suggest asking the jeweler to do a sketch for you I'm sure they wouldn't mind. The band on this ring does seem quite substancial.
GOOD LUCK!
Alison Mills
Qualified Jeweler
FGAA Gemologist and Diamond Technologist
Registered Appraiser

Here is my story where we did exactly what you are thinking of doing. From my experience, I would give you the following advise. Make sure that Verragio will revise the ring if you are not happy with it.

We had the attached Scott Kay ring made with a six prong head. Scott Kay also only shows/advertises 4 prong heads but my bf was really insistent that he like the look of the six prong. We had a 0.90 Lazare diamond to be set in it.

Scott Kay did the modification and we were told that this was only the second time that they were going to make a six prong setting. We bought the matching band at the same time we bought the e-ring.

When the ring first arrived, we were surprised by how Scott Kay did the prongs. It looked like a round king's crown, almost like a stock head from a Stuller catalog was just soldered in there. The prongs looked nothing like the original ones. Also, with the head the way it was, the wedding band did not sit flush. (I noticed the other thread about whether or not the ring should sit flush and we are of the opinion that it should

). Luckily, we told the jeweler we were not happy with the results and they sent it back to Scott Kay who gladly redid the ring, handmaking a 6 prong head that looks wonderful and is more in line with the Scott Kay look.

I would post the final product but my bf is the one who took digital pictures of the ring and he is out of town until tomorrow. When he gets back, I can post the pictures.

Thanks for the input. I really like the setting diamondnovice. please post a picture of the final product, i would love to see it. I think the sale is final once I order it + i have been driving the vender crazy! I would like to know if this is something verragio does often or not. I find it hard to believe that this kind of request is uncommon. I would have thought that verragio and scott kay had more requests for six prong settings.

I have tried to upload a picture but the file size is too big. I will work on it to see if I can reduce the size. I also have a call into the appraiser who took great pictures. Hopefully, he will be able to email those to upload.

That didn't take long to figure out. This is a picture from the top. The digital camera I have is not the greatest so I took this picture through a loop. The diamond is a D VS2 so you can see how off the color looks. I will try to take one from the side and post it because that really shows how nice they did the prongs. 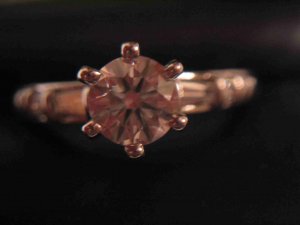 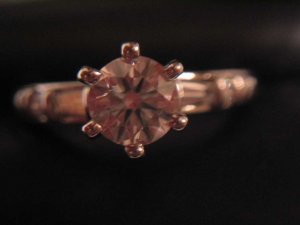 Thanks diamond novice. The setting does look pretty. I think your right that a side view will show the six prongs better. I look forward to seeing it and maybe it will help me visualize the six prong on the verragio. Im just concerned that they wouldnt hand make it like yours.

Because my camera is not good at close ups, I called the appraiser who did my appraisal. He took some awesome photos. He is supposed to email them to me. When I get those I will post them.
R

thanks again diamond novice. im going window shopping again tommorrow to look at the setting and to look at other options. I need a half day off anyway!! I hope that after Im engaged my gf wont be upset that Ive used some of my vacation time on these "explorations"!!! I would have never imagined that the setting would be sooo much more stressful than the diamond purchase.
R

ok took a half a day to look at rings and took the hour and a half trip to look at this setting. its wide but not as wide as i thought and Im waiting for the jewler to give me some specifics on it. im still ordering it from dbof because they will never match the price and jan is great.

Here is the first one showing the handmade 6 prong head. 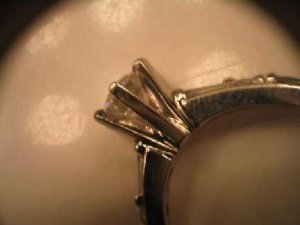 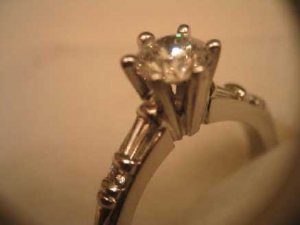 And one on my hand. It took me a while but it seems I am getting better at taking pictures. 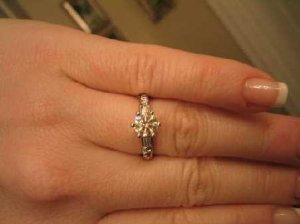 Your ring looks very pretty. definitely give me reassuance that although companies market settings in four prongs they look just as good in six.
R

would verragio tell me the width of the band if i called their customer service number?? im concerned about the width not thickness i guess.
R

verragio reffered me to the dealers. i feel bad getting the store to do the work knowing that im going to get the ring from the internet vender in the end, but ill give them a chance to match the price.
R

the store was able to tell me that the top is 6.7 next to the baguettes. The bottom measures 3.7 and the sides about 4.7 mm wide. what would be considered the average width? would this appear to wide for a 6.5 ring size? She has a ring that she wears and she told me she would want the engagement ring to be about 3/4 as big, do hardware stores sell anything to mesure in metric?
R

im contemplating custom now a jewler will make setting apx 3.75 mm band with .16 single baguettes then .8 princess cuts for 1620 platinum. he will get the mold and then i can decide if i want to purchase. im going for a quick trip to 47th street to look at settings on thursday as well if that doesnt pan out i guess this is it. it think the 6.7 top was to wide and would take away from my 1.07 carat and the 4.5 shank is too wide. plus ill save prob 1200.00
R

if i contacted verragio would they by anychance reduce the size of the baguettes and sidestones so that the baguettes are not 6.7 on top and the band would be about 3.75 mm wide instead of 4.7?