I''ve spent a long long time building a ruby engagement ring, because they are of historical significance to my perspective fiancés family. Now that I am getting closer to proposing, I want to try and explore the ring that inspired all this. Right now I know very little, but i''ll find out more as I talk to her mother.

How do I learn as much as I can about this rock, without sending it to a lab. I don’t need hard core guaranteed science, as I''m not trying to determine value rather piece together a bit of romantic history.

It''s not a stellar stone, and is really pink set in yellow gold. It''s highly included, and cloudy, but cut symmetrically, and gives off a little light. I''ll get a better date when I can, but it was probably purchased in the early 1900''s no later than 1920. Again, I have no lab access, and 5 days to learn what I can. How do I find out everything I can about this ruby, or at least some cool facts about rubies purchased in this time period. 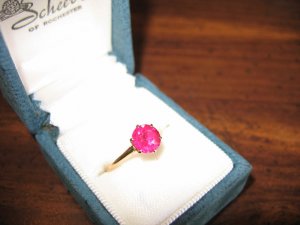 Wow, I'm getting crickets on this one. I found out it was purchased in 1913 from a small jeweler in Rochester. I have been looking all over the web for info about rubies from that time. So far all I've found was a short blurb

""The first major group is the "hot electric pink". These are the stones that were readily available in jewelry stores during our parents' and grandparents' times. ""

Does anyone know where I can read more about rubies purchased in this time? Is the hot pink color a clue? Was there a prominant mine or region that produced rubies in this time frame? Any scraps or articles would be helpful.

There are a few ruby experts around here sometimes but I'm not sure where they are. palagems.com might have some articles about the history. Seems they have good info in general. The guy over there wrote a whole book about rubies and sapphires and you can view some chapters
http://www.ruby-sapphire.com/r-s-book.htm
Maybe someone here will post.

I strongly suspect the ruby is a Verneuil type flame fusion synthetic, which came out strong on the market a little after the turn-of-the-century.

The main reason I suspect this is because of the cut.

On the other hand, round synthetic rubies were cut en masse at this period of time in Europe and the US.

Secondly, because of weight retention reasons, most natural rubies are usually cut in an oval or cushion shape. The rough ruby crystal lends itself easily to these shapes, while usually cutting a round shape will end up "wasting" a lot of material.

On the other hand, the rough "boule" of Verneuil type synthetic ruby lends itself easily to a round shape. There's also no problem with "wasting" material, as it is inexpensive.

Although your comment that the ruby is "highly included" does not go along with the average flame fusion synthetic (they are usually close to flawless), there was a practice of "quench crackling" them to replicate the highly included look of a natural stone. The synthetic would be heated and then tossed in water, producing an internal network of "crackling" with a similar appearance to natural inclusions.

The color also has a synthetic "look" to it, in my opinion.

It would be interesting to hear what the lab results would be on it. It's a simple ID, which most gemologists wouldn't charge too much to do.

Sorry for possibly "non-romancing" the stone. On a positive note, many people were so thrilled at the successful synthesis of ruby that they used synthetics in many fine pieces of the day. They always had terrific color and lended themselves well to good matching of multiple stones. They have most the qualities of a natural ruby at a fraction of the price, and command a significant market in and of themselves.

did you find this in Rochester NY??

and you were correct sir. It was indeed a fake. The appraiser that did my e-ring took some pictures where you can see an effect that looks like a record (vinyl) on the surface of the stone.

It''s still sentimental.....but it''s not a ruby like the burmese beauty I bought.

Date: 1/8/2007 11:12:36 AM
Author: timmy!
and you were correct sir. It was indeed a fake. The appraiser that did my e-ring took some pictures where you can see an effect that looks like a record (vinyl) on the surface of the stone.

Thanks for the feedback, Timmy. The "vinyl record look" is the characteristic growth pattern of the Verneuil flame fusion synthetic. It''s referred to as "curved striae".
Rich, non-Independent GG Appraiser
Sarasota Gemological Laboratory