I am looking at a 1.45 yellow round. Table size is 68%. From what I can see on the internet, the point of FCD's is all color.
Unlike a white/colorless diamond, the cut standards are very different on FCD, most FCD's are cut with a larger table that really woudnt fly on a round colorless. But having said that, many jewelers who sell fcd's, and you would think know about what they sell, insist
that a table like 68% is way too large, its a red flag even before they see the stone.
Any expertise out there who can advise on this ? For ref the round I have is GIA, vivid color, looks great face up.

A second point is the idea that yellow rounds and asscher cuts for an fcd are poor choices to buy as they leak light and dont hold color as well as say a cushion or radiant. But why is that the retail buyers problem ? its a cutters problem. I am the end user and if the color is
great despite the shape, then its all good, especially on a rarer cut (granted pricing will be higher). If the color is not good, then I dont buy. Yet so many jewelers say "dont buy a round or asscher in fcd, that does not make sense.

That is a huge table. The great thing about big tables is you get a great spread, the bad thing is that generally to compensate the depth of the stone will be shallow ie lack the depth to give them a nice/decent cut. Do you have a photo of the stone? They often do this with fancy colours to maximise spread and make the stone face up as big as it can.

It depends; is there a fish-eye or window? Is there an easily seen tilt window? Does it detract from the beauty of the FCD? Perhaps that is the trade-off to achieve the vivid colouration.
Sometimes the mind ignores what is logical because the person cannot accept the reality of what it is.
S

here is a pic 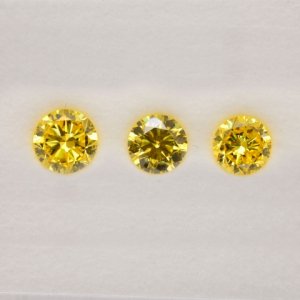 This yellow from James Allen has a 65% table. Large table but secondary to great looking color ?
S

This one is a 66% table. Its like Im beating a dead horse, but a very large table when compared to white/colorless diamonds seem standard for FCD

Colour over cut, but that doesn't mean one has to accept horrible cut either.
Sometimes the mind ignores what is logical because the person cannot accept the reality of what it is.
S

with color being equal, what is the benefit of a smaller table ?. Is cutter trying for great light action + color. From what I have seen, the smaller table might make for darker spots in a yellow, but does not really do anything on light reflection. Cutting with a smaller table as if its a round colorless would seem to be a mistake for fcd's. That middle diamond has a smaller table and is cut like a colorless

The table isn't the deciding factor in a well or poorly cut stone - it is how it works in combination with all the other angles that makes it sparkly or dull. Also, you posted a static picture, which often does not tell the full picture when it comes to FCDs. For a fair comparison, view the 3 side by side in the same video. I believe that darkness in the middle FCD to be an artifact of the camera shadow by virtue of it being right in the middle of the picture, just as colourless diamonds can show the same darkness if obstructed by a head or camera shadow.

Check out Kenny's green diamond. Excellent colour and cut to perfection!
[URL='https://www.pricescope.com/community/threads/2-new-fancy-colored-diamonds-blue-green.148569/']https://www.pricescope.com/community/threads/2-new-fancy-colored-diamonds-blue-green.148569/[/URL]
Sometimes the mind ignores what is logical because the person cannot accept the reality of what it is.
S

The story on the center is that cutter cut it like a colorless to get ex/ex. But on fcd it caused some light leakage. may get better light sparkle, but hurt color a noticeable amount.
Thanks for your help
You must log in or register to reply here.
Be a part of the community Get 3 HCA Results
Jewelry Blog