Can someone please tell me why my platinum eternity band is causing a rash on my finger? I thought platinum was suppose to be the most non-allergenic metal available.

I have heard some people say that their eternity bands irritated their skin too. For them, it wasn't the metal type, it was the eternity band style. The edges of the band abraded the skin of their fingers. Just a thought, your problem could be something else entirely.
G

I had to return a 14K gold CZ eternity band because it cuts into my finger whenever someone shakes my hand tight. I also think it is the band style, not the metal itself.

It's very unusual for someone to be allergic to platinum.

First, are you sure it's platinum, and if so, does it have an "edge" to the "walls" of the ring underneath. Or, is it made in such a way that it traps moisture under it?

Smart Richard, who is also a night owl.

I've quit sleeping since I got hooked on these forums... My kid's have forgotten what I look like and I think my wife is divorcing me. I'm not sure, because I haven't take the time out to look up from my screen.

Thanks everyone for your response. Yes my ring is platinum and no there are no edges that would rub or irritate the skin. Maybe moisture gets trapped under the ring or maybe it just stress, who knows. Will check with the store where I bought the ring. They're very reputable and have been in business for a very long time. I know they wouldn't sell me something other than platinum.
Thanks again.

Hello. I know this post is anciently old but I have a problem to discuss.

For one, my wife's Platinum engagement/wedding band has never been right. The prongs were always getting bent, the ring was always going out of round. To us, it seems the metal was soft. The ring was purchased from Robbin's Bros here in Southern CA. The theory of the ring being soft was put to the test by my parent's jeweler where they live who says that it shouldn't do that. He was able to use his finger tip to bend the prongs back into place, and used very minimal pressure to re-round the ring.

Now, we have had our first child, and the saga continues. About 3 months ago, my wife's finger started to blister under the ring. It broke out in a bad rash, and the skin started to peel away. We cleaned the ring and put it away. Since then her finger has healed and looks fine. Two days ago, we said, hey...let's try it again! So she put it back on. In two days, her finger has turned red and blistery again. The ring is now back in our box waiting for a brain storm as to why it has so many problems, and what on earth we should do about it.

Firstly, the settings sounds like a really bad job: the maker skimped material on those prongs (they should not be that fragile) and, most likely, the ring has been sized at some point in time too much or too badly - which caused the distortion of it's shape and perhaps the other issues. A very light, unsafely thin band would explain most of these ills. This looks like good reasons to scrap the thing and get something safe instead.

Also, rings should not be instruments of torture (as the description of the latest reaction to it sounds). It is hard to tell what causes it: most likely the rash and all are caused by interrupted circulation due to either too much pressure or uneven pressure on the finger. The size and/or non-round profile of the ring would be to blame here. Platinum is a staple metal for medical applications: it just does not cause allergic reactions.

I do not know how the ring looks, this is just what I would be looking for in general. Does this match the facts?
FARE THEE WELL​ 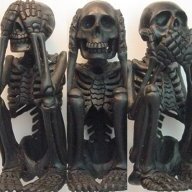 I hate to even suggest it, but is it really platinum, and if it is, could the alloy have been contaminated? Unless the ring is extraordinarily thin finger pressure should not be able to distort the ring or the prongs, and it shouldn't be causing an allergic reaction.

The reaction could easily be caused be some of the other reasons mentioned on this thread, but after two days? I would not exclude the metal as a suspect just yet...

Does she wear/have worn other platinum pieces in the past with no problem? If you know the metal in general is safe for her skin, I agree with Valeria, dump the mounting for a thicker or safer one.

This is the first I have heard of a allergic reaction to platinum, too. If it isn't the edges or finishing of the ring, or the stones, could it be the mix in it? I dunno. Is it 950 PLAT or 900 PLAT? Reason I ask, there is more of an alloy mix in 900 PLAT then the 950 PLAT and maybe it is possible that it is what the mix is that is giving you the problem? Dunno but am interested in what comes of this!
E

A long time ago I used to work at a jewelry store and there was a lady that came in with the EXACT problem.

She had worn her platinum wedding set all of the time and it turns out that there was a buildup of chemicals and soap and junk on the band that a simple cleaning was not getting off.

We ended up soaking her ring in lye for a couple days and it got all the gunk off and she was able to wear it again.

I'm definitely not an expert... just speaking from what I saw...

Maybe your jeweler has lye to clean up the ring??

Excellent idea! After a lye bath all organics go away. The ultrasonic blows everything off easily after a lye treatment. Might try it.

Still doesn't explain the distortion/extreme softness issue, though. Maybe if the above works for the allergy problem, and it is plat, you can get a jeweler to heat treat it for you to solve that problem as well.

if it is too soft, maybe it is of one of the lesser grades of platinum ....

check out this link:
http://www.diamondsunlimited.com/platinum_alloy_mixes.html

If you scroll down that link aways, there is a chart which gives you the platinum and mixes with their hardness rating and melting points.