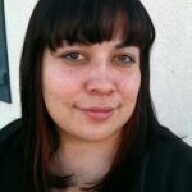 I've been a long time lurker here on PS but I'm looking for some input on a reset I wanted to do.

I have a 1ctw shared prong anniversary band. It's 7 stones that graduate in size. I want to reset this into a scatter style band but I'm not sure if it's practical/feasible to do so with the size of the stones. Most scatter bands I've seen are a .3 ctw or close to that, and I'm looking at putting more than 1 ctw into this ring. I don't know if it'll even look right or can be done, and since I'm impatient and can't wait till my Tuesday jeweler appointment I'm looking for your input.

I've attached a link to the pic of the ring I have, what are your thoughts?

First of all - welcome! We were all lurkers at some point or another - glad you've decided to join us!

The ring itself would of course have to be wider than the width of the stone in order to be set into the ring. I think it would be doable but not sure how 'scattered' they would look as they are larger than most stones you see in a scattered band.

WF has their scattered bands http://www.whiteflash.com/wedding-bands/scattered-diamond-wedding-band-234.htm - depending on the material and labor cost it might be less expensive to buy one of theirs and keep your seven stone ring intact.
D

I just reset my eternity of 22 .06pts rounds into a DBTY necklace. Best decision I ever made! The eternity was too high for me and didn't match my ering so it was a great solution for me. So just putting out another option for you!

MissGotRocks, I think the widest stone in my 7 stone is 3mm, so maybe I could swing a 4-5 mm ring? Maybe it would look less scattered and just a little offset which I think would be ok too. I should have said this in the original post, but the 7 stone ring has been sized several times (kept changing my mind about what finger/hand it was going to live on) and the integrity of the setting is becoming a little questionable which is what prompted the whole re-set idea.

Lilythespitfire, I love dbty necklaces, and I actually had whiteflash make me one a couple of years ago.

It might have helped if I mentioned this in my original post also, but I'm looking for a ring to wear instead of my wedding set since I'm expecting and want to be able to wear a ring without worrying about scratching the kids eyes out. Ultimately I will probably just have to be patient and see what my jeweler says, but I love hearing everyones thoughts and input on the idea.

Sounds like it would work with maybe a 4mm band. Will be interested to see what your jeweler says.

Congrats on the new baby on the way - such exciting news!

Ok, my jeweler says it can be done in probably a 4.2 - 4.5 band, but since the diamonds are larger the ring will have to kind of dome a little higher than a typical scatter so that the bottoms of the stones dont stab me in the finger. I'm supposed to hear something soon as far as cost and turn around time. Patience is not one of my strong suits.

Ok, she says that to use my existing diamonds she'd have to make the band really high so that the stones dont poke me in the finger and in order to do that it would cost upwards of $2000 b/c it would require a ton of platinum which is more than I wanted to spend. On top of which, it wouldn't look pretty she says.

She offered a solution, I could trade in my 7 stones in my 1 ctw ring for smaller stones, still totalling 1 carat and scatter them into a ring. Cost of the metal and labor would be around $1200.

The alternative, keep the ring as it is, which I cant wear anyway, buy a white flash scatter ring for $1595 and eventually just re-set the old ring into something else.

I'm leaning towards the re-set, only because I feel like a 1 ctw scatter would be different/unique but still fit my needs vs the .33 ctw scatter that is (obviously) available widely in stores.

The only hesitation I'm having is squaring the idea of spending $1200 on a re set to achieve a similar look to something I could just buy for $400 more. They're not the same, but they're close.

I would just buy the new one for 400 more. Your larger diamonds are more valuable than the same amount of smaller stones. I would
save the ring and do something else with it when you decide. You could probably have a nice flower pendant with those seven stones,
or use them in a pair of earrings.

Or how about a bezel band?
Mercy triumphs over judgement

That's kind of what I was afraid you'd find out. I almost think I'd consider buying one and saving these stones for something else. It's sometimes easier to buy something premade as you can see pictures and get a feel for the look. Custom is always a bit murky and unknown!

So talked to the husband, and the jeweler, and ultimately decided to sit on the existing ring and just get a scatter band. I was looking at the WF one, but I think I'm gonna go with an ebay Tiffany Etoile. I found a couple in my size, for $1350 in perfect condition from sellers that have literally thousands of positive ratings so I'm pretty comfortable with that.

Thanks for the help and input.

I had the Tiffany Etoile - sold it on ebay last spring! It is a beautiful ring though and it feels like butter slipping onto your finger. While I know this wasn't your original plan, I think it is the best way to go. Doesn't make a lot of sense trying to reinvent the wheel when the original is so fine. Tiffany's will repolish any item that is authenticated as theirs so they can make it look brand new. I have seen some listed on ebay that looked really used but hopefully you'll find one in your size that looks great.

Happy hunting and be sure and come back with pictures for us!
You must log in or register to reply here.
Be a part of the community It's free, join today!
Jewelry Blog