Radiant or Cushion cut diamond comparison- tell me which one you like best for an engagement ring! 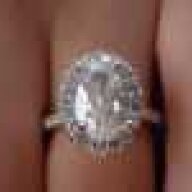 I am having a difficult time deciding between a radiant or cushion cut diamond for an engagement ring. Can you tell me some pros and cons about each one?

Cushion for me, and not a 'crushed ice' one.

Radiants are more of an acquired taste it seems, I wouldn't buy one for anyone as a surprise... unless they wanted a fancy colored diamond and that was their top concern. But if someone has said they like radiants, I'd totally get them one.

Both have the same problems: Smaller spread than rounds, marquise, ovals, need lots of pictures, can't be picked up the numbers. Radiants, like I said, do seem to be less popular, but again... that's a matter of personal taste.

What has she said she likes?
"So often in life, things that you regard as an impediment turn out to be great, good fortune." -- Ruth Bader Ginsberg

She likes a lot of sparkle so wasn''t sure if I should go with radiant or the more popular cushion cut stone which she also likes.

Cushions are glorious. I don''t have one but I think they are beautiful.

Personally I prefer cushions as I have very specific taste with radiants and see few that I like.
Pricescope Prosumer 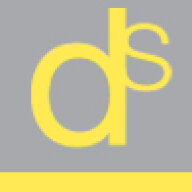 Date: 2/12/2009 10:06:33 PM
Author:winston5
I am having a difficult time deciding between a radiant or cushion cut diamond for an engagement ring. Can you tell me some pros and cons about each one?
Click to expand...

I find that radiant cut diamonds are more consistent looking than cushion cuts. Radiants cuts are usually either square or rectangular whereas cushions can be square, slightly square, or rectangular with length to width ratios varying all over the place.

However with both radiant cuts and cushion cuts you really need to see the diamond. The grading report will tell you facts like color and clarity and measurements but the look in the end is how it looks to you in person or via a live showing.

For example, a cushion can either be really rounded (more oval) or they can Resemble a pillow with rounded edges and straight sides. There are also different types of cushions cuts - cushion modified brilliants and cushion brilliants (noted on the report). Cushion modified brilliants often have more of a "crushed ice" look to them and are the modern way of cutting a cushion. Cushion brilliants are more like the way they used to cut cushions when they first came about - like the old European/old miners.

Radiants tend to differ from stone to stone as well but I feel like you never really know what you are going to get with cushion cut diamonds.

I''m not so much a fan of the crushed ice look. I''d say a chunky cushion. I have seen pretty radiants though, crushed ice and all. It really does depend on each individual stone. 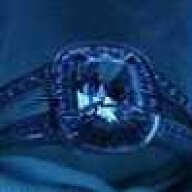 I have this exact same debate when I was picking an engagement ring. I''d go with radiants if it is a fancy colored diamond. But when it comes to white diamonds, I feel cushion''s chunky facets beat the crushed ice looks of radiants. If you can''t decide btw the 2 try looking at some of the cushion brilliants.

Also check out this www.goodoldgold.com ''this week''s video'' on cushion brilliant vs cushion modified brilliant. 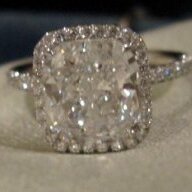 I was originally in the market for either cushion or radiant and went with a radiant. It is round cornered radiant (some don''t have the corners rounded) which gives it a more pillowly look. Either cut can give extrodinary brilliance and fire. You really need to lay your eyes on both cuts. Poorly cut radiants have alot of fisheye and bow tie, whereas poorly cut cushions just don''t shine (dull). I think a great radiant has a glassy flowing quality to it. This is the one I bought (Harry Winston, 2.32 ct, micro pave setting 0.85ct).

Date: 2/13/2009 9:10:36 PM
Author: DiamondFlame
I have this exact same debate when I was picking an engagement ring. I''d go with radiants if it is a fancy colored diamond. But when it comes to white diamonds, I feel cushion''s chunky facets beat the crushed ice looks of radiants. If you can''t decide btw the 2 try looking at some of the cushion brilliants.

Also check out this www.goodoldgold.com ''this week''s video'' on cushion brilliant vs cushion modified brilliant.

Great link DF, I was going to post the same thing!


Also, to the OP, she says she likes sparkle, but has she said what shape she likes? Is a round out?

Out of the two choices, I would go with a chunky cushion.
For there is nothing hidden that will not be disclosed, and nothing concealed that will not be made known and brought to light. - Luke 8:17

I prefer cushion cuts, but not the ''crushed iced'' look. I think chunkier looking cushions look much nicer and have more definition. I haven''t come across many people who do not like cushion cuts, seems everyone i know loves them! 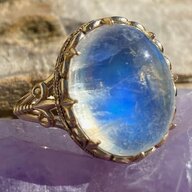 I''m not into either squarish shapes, but if I had to choose, I''d go with a cushion. I like the rounded edges of the cushion. I''m not too crazy about the angular edges of the radiant..or the busy crushed-ice look.

But what do YOU like?
"We are all connected. To each other, biologically. To the earth, chemically. To the rest of the universe, atomically."
Neil deGrasse Tyson

I feel it''s definitely an opinion question.
In terms of which pros and cons of each- I feel that share a lot of the same attributes.
They are both less costly than a round.
Both can offer a nice amount of finger coverage, if they are well cut.
Both work very well with side diamonds such as trilliants, half moons, or trapezoids.
Personally I love the "bucket of crushed ice" look - although as we see- it''s a matter of taste- some don''t like the fact you cant make out individual facets. To me it''s like a bottomless pit of sparkle- we''ve found many people love this as well.

Sorry, I know I didn''t answer the question as to which is better for you....
What shape does she like, square or rectangular?
David Friedlander
President- Diamonds by Lauren/Rock Diamond Corp- Serving the Pricescope community for over 15 years- located above 47th St NYC
http://diamondsbylauren.com
212-382-3770

Cushion.
We only know the most minuscule fraction about life, ourselves and the universe and even that changes daily. To only believe what science can prove right now is like living inside a small box and not being open to the possibilities that lay outside.