Question from a LIW beginner

As I mentioned in earlier posts, my BF and I have been together for 8 months. We're both 29 and have discussed - in the abstract - that people in their late 20's should generally know after a year of dating whether or not GF/BF is the one you want to marry.

So here we are, 4 years away from our one year, and things are going incredibly well for us. If he asked me to marry him tomorrow I wouldn't hesitate to say yes. Here's the thing - we haven't talked about us getting married. Which I think seems normal, since it has only been 8 months - I know I'm afraid to scare him with a conversation about it. Maybe he's hesitant to talk about it too?

While I know that the least childish thing would be to just risk the scare-factor and be clear with him, I just can't do it yet. My question is: for those of you who are engaged, or who know for sure that it's coming, is there anything I can look out for as a sign that he might be getting in the marriage mindset?

Have you guys talked about marriage in general, like not necessarily to each other, but at all? Like do you even know he wants to get married? Does he know you are looking to get married eventually?
**former lurker** ;P
S

Thanks for your reply


I suppose I haven't (or can't remember if I have) asked him *specifically* do you plan on getting married one day, but the whole conversation about how you should know after a year - it just made me assume so. Also, all of his friends are married already, and we have talked about a couple of my friends and how lame it is for their BF's to be stalling. I did ask him at one point if he wants kids, and that was a yes too. He knows I want kids.

Hmm...well, also he knows I won't move in with someone until we are, at the very very least, engaged with a date set. And we've talked about how nice it would be to live together.

Haha no to me it sounds like you guys are headed in the right direction. The warning signs for a proposal become more clear once you decide you are definitely going to get married to each other some day. If he is not making any decisions for at least four months then you may be drooling over diamonds online in secret for some time!

I'm sure some girls would advise you to ask him to take you ring shopping either now or after you hit the one year mark. Personally I never asked my FI to go and I think it drug it out longer until he got around to it, but that's how I wanted it. I wanted him to feel like he did it on his own terms. Everyone is different though. I was happy with our relationship then and I am now, although for about 8 months from the time I thought we would get engaged until the day he actually took me ring shopping I was wondering...hey? where's my ring?!

And then after he purchased the ring he made me wait two and a half more months which was total agony!

So really from the point I knew we were "forever" I waited practically a year for my ring.

I'm not sure if that's answering your question though because you asked when did we decide and how did we know? I think our situation was weird because we talked about marriage from the beginning. I have only ever brushed on marriage with other boyfriends before and it was basically because it got to the point where it was "marry them or dump them" and I always dumped them!
**former lurker** ;P 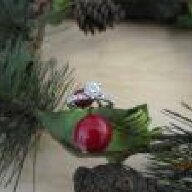 I'm not engaged yet, but I know it's coming SOON! For us, the conversation came up pretty much from the beginning. Those conversations came up generally at first and then turned into, "When WE get married..blahblahblah". This past Feb (1 year and 4 months into dating and 2 years of knowing eachother), I let it be known that I was ready and wanted to start ring shopping. BF was not completely ready and while it hurt, I knew that I couldn't push him, so I didn't. July came around and BF made a comment that lead me to believe he was ready; I suggested we start looking at rings and he didn't hesitate (like last time). He and I started looking together, met with several jewelers and the whole 9. So, long story short, your boyfriend will let you know when he is ready. He might not completely bring it up in all those lovely words we women love (Let's go look at rings...what kind of ring do you like..etc), but he will make a comment that will tell you he is ready to at least start looking. My suggestion is when you guys are discussing friends' engagements or timelines, maybe "walk him into talking about YOUR timelime/engagement". Say something that will be open ended enough that will allow him to make it relavent to you guys. That way, you don't have to be the one to "bring it up" persay. Or, you could just pull the bandaid off and go for it! lol. From your post, it doesn't seem that you are too comfortable with that tactic, so I would go for the first; walk him into it. That could be as simple as saying, "So and So looked for rings together. It seems that a lot of people are doing that these days". That statement gives your bf the oppurtunity to POSSIBLY say, " "Yeah I noticed that. I think we should do that; that way you get exactly what you want". NOW you could then turn around and say, "Yeah, I think that's a great idea. When do you think we should start doing that? Not to buy that day, but just to get some ideas"? That leaves him with the ball in his court; he can give you the answer you want (a timelime) or he can shoot you down and say, "I don't know". If he says the later, then you know he isn't ready. If he gives you a timeline, then you're golden! Granted, this is a gamble and your wording won't be exactly like mine, but you get the idea..I hope lol. Hopefully I didn't confuse you!!
"I carry your heart with me (I carry it in
my heart) I am never without it (anywhere
I go you go, my dear; and whatever is done
by only me is your doing, my darling)"--E.E. Cummings

It sounds like you are definitely on the right track! It's easy to become concerned with your particular situation and timeline (like if people get married in their late twenties and you are seeing your birthday as a deadline, for example). I would wait it out a little longer. If you get the opportunity, and the conversation lends itself to the subject, I would subtly direct it that way. But, my biggest regret was always talking about it too much. Once you know how he feels, let it go as much as possible (and vent on here instead!). If time goes by and you can't take it, I would revisit it every few months, but once you know how he feels, it's up to him to take the plunge. I always knew my boyfriend wanted the same things, but was waiting for the money...so once he knew what I liked, I had to try my best to stay out of it and let myself be surprised and live life in the present.

Best of luck and keep us updated!
S

Thank you all so much!

I'm going to try some patience and wait to see if he will bring it up. Maybe sometime after the year mark I'll have the nerve to ask what's up

I'm going to try some patience and wait to see if he will bring it up. Maybe sometime after the year mark I'll have the nerve to ask what's up

Agreed. I would give it a few more months.
You must log in or register to reply here.
Be a part of the community It's free, join today!
Jewelry Blog