I''m debating between two styles for a custom band to go with my e-ring. Some might remember that I mentioned I''d underestimated the importance of matching bands to my Hin3 (husband in 3 months!

), so what we decided was, we''d get matching bands (we like "the gatsby" at greenkarat), and then in addition, I could get a shadow band of sorts in the gatsby style to go with my ring when I want to wear them together, and I can wear the regular band when I don''t or don''t want to wear my e-ring at all.

Basically, it comes down to a bigger or smaller gap between the bands. I like a little gap, I don''t want them to appear flush. I''m leaning toward the smaller gap just because I don''t have very long fingers. 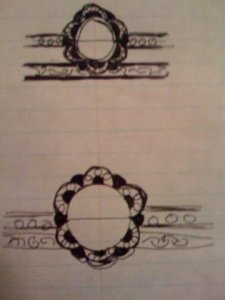 Here is the "gatsby band" 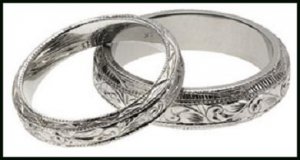 So what I''m thinking, in the first one, the bands would be set further apart (not so good for comfort, i think), but then the flower would just sort of jut into the band. The second one would mean that there would be a thin metal shadow along the bottom of the undergallery. Fortunately, since the gallery does taper inward *slightly* the line of the metal may not be seen from a top down view (the shadow line would be much thinner than the band part of the ring on the sides of the flower). I like the second one better, but what do you think? Any photoshoppers out there who might be able to show me what they could look like?

and just so all the info is here, here are a couple of the gallery:

shot of the gallery 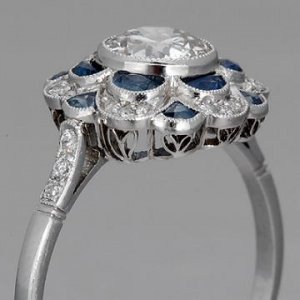 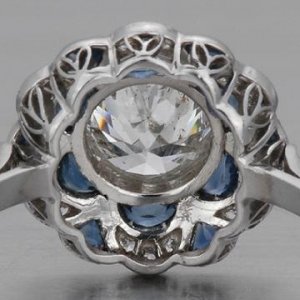 And mods, please let me know if this is the wrong forum for this. Thanks!

In case anyone wants to photoshop for me (pretty please), here''s the best one I''ve got of it face on 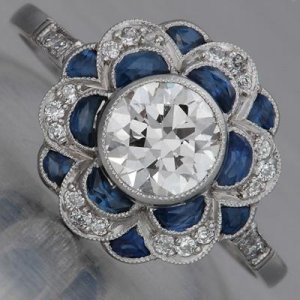 Date: 2/17/2009 2:56:42 AM
Author:frenchblue
I''m debating between two styles for a custom band to go with my e-ring. Some might remember that I mentioned I''d underestimated the importance of matching bands to my Hin3 (husband in 3 months!

), so what we decided was, we''d get matching bands (we like ''the gatsby'' at greenkarat), and then in addition, I could get a shadow band of sorts in the gatsby style to go with my ring when I want to wear them together, and I can wear the regular band when I don''t or don''t want to wear my e-ring at all.
Click to expand...

I''m confused... by shadow band, do you mean one similar but thinner?

You should check out Green Lake Jewelry Works. They specialize in styles similar to Gatsby.

Can you clarify what the question is?

hi musey, the "shadow band" is what a jeweler had called the style of the second sort of band i'm considering, where, if you imagine it without the engagement ring, it will look like a straight band with a scalloped curve in the middle of it ("shadowing" the scalloped shape of the base of the ring, to fit flush with it, as in, interlock), but the curve may be more visible than on the first sort of ring, which would be straight on one side with the other having the scalloped curve cut into it.

whoa, that was a bad run on!

it was just a question as to which of those styles PSers would choose with style 1 pro: curve being less visible, con: taking up more finger space and style 2 pro: less finger space, con: curve more visible.

there's another run-on. maybe i should try doing this at a normal time of day

ETA: thank you for the link, they have some beautiful bands and i will definitely show my fiance! (of course, the question still remains about which custom band style to go with...)

I would go with a custom curved band to match your ER, and also get the straight gatsby style for wearing without your ER. I have a custom curved band (much less curve required though), and it really sets off the ER nicely. When I try my ER with straight bands, it looks off and detracts from the ER IMO. Your ER is the star, and you don't want it overshadowed by a WB. You also don't want to eat away at the exposed underside.

ETA: after re-reading your explanation I guess I'm suggesting the shadow band. It would look integrated with no gap, but would actually have a thin curved line to it, right? That would look nicest IMO. 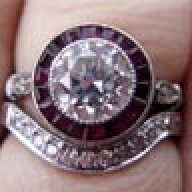 I had similar issues with mine, but I got extremely lucky. 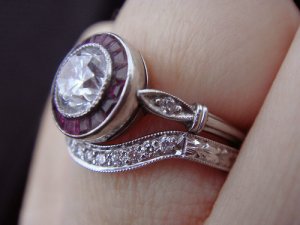 Ah! It all makes sense now. I have never heard the term "shadow band," only curved band. Thanks for clarifying!

It''s tough, because I personally love a gap... though perhaps not as wide as a straight band would create with your particular ring. Given the metalwork on the profile of your ring, though, I would definitely go for a curved band. All that pretty wire work would be eaten away far too quickly with a straight band rubbing against it. Go for the custom curved band.

hi everyone! been busy for a few days but thank you all for the replies!

so, as far as a custom band goes, there are basically two different things i could do. i suck at drawing but i suck at trying to explain more, so here''s a pic of what the two band choices would (essentially) look like. 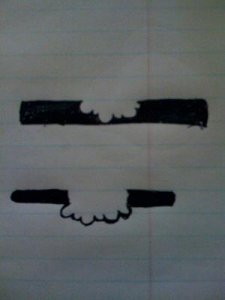 the first one would basically end up looking like a band with a bit of a gap (which i like), but would take up more room on my (apparently slightly stubby) finger. the second one would appear to be flush or almost with the e-ring band and take up less room, but i''m thinking that the scalloped shape around the base of the ring it may be more visible.

I''d still do the second one. I''d be happier with less of a gap. Either way it will be gorgeous!