Please Help Me with Reception Card

Good evening lovely PSers! I''m having some difficulty with a couple of items on our reception card and could use some of your wise and thoughtful help. These are the two issues:

1) Our ceremony will be at 4:00 at our church, and the reception will start at 6:30 at a different location. Due to spacing on the reception card, I put "following the ceremony" before listing the time. Any opinions on this?

2) I''m having trouble deciding whether or not to include the word "at" before the time on the card. Is it better to add it for flow, or leave it out to "match" the invite?

To give you a sense of consistency and formality, I''ve included our invitation wording below:

Mr. and Mrs. Happy Sunshine
Request the honour of your presence
at the marriage of their daughter

Friday, the twenty-fifth of September
two thousand and nine
four o''clock in the afternoon

Since reception cards don''t seem to be terribly common, I haven''t been able to find any that fit my exact style and situation. I''m going to try and post the reception card so you can critique the actual thing, but if it doesn''t work I''ll just write it out. Thanks!

Ok, the attachment should work. If you click on it you will see exactly what I mean. Otherwise, here is the wording:

Hmmm....i am the worst person to ask about these things, as i never even pay attention to what''s on others....however, I think the "following the reception" part is cute, and i would not include the word "at." I like it the way it is

unless you are planning on having a two hour wedding, I wouldn''t consider your reception as following the ceremony. I would cut that line and just have the time if you want people to wait before arriving at your ceremony.

Here was the wording of mine, if it helps.

Reception (in top left corner to match the other pieces)

You could use the same wording, except put the time instead of "immediately following the ceremony"

I also went back and forth with the word "at" but chose to leave it out - probably because I read somewhere that it was proper that way. I don''t remember now, but I think it''s fine either way. I''ll see if I can find an online resource.
G

From the Crane web site:

The first line on the reception card indicates the occasion. It reads "Breakfast" when occurring before one o'clock (regardless of the menu) and "Reception" when held at one o'clock or later.

The name of the facility at which the reception will take place is given on the third line. The address is usually shown on the fourth line, although it’s omitted whenever the facility is very well known or when directions and map cards are used.

The city and state follow on the next line if they are not the same as those shown on the invitation. If the city and state don’t appear on the reception card, it’s assumed the reception is in the same town as the wedding. Likewise, if the city is different but the state is the same, you need only mention the city. These are options. You may, however, choose to use both city and state. When reply cards are not being sent, a reply is requested in the lower left-hand corner of the reception card. Corner lines are engraved in a smaller size than the body of the reception card. The top line asks your guests to reply by stating either, "The favour of a reply is requested," "R.s.v.p.," or "R.S.V.P." All three are considered proper. However, in some regions, such as the southern United States, "The favour of a reply is requested" is preferred and "R.s.v.p." is frowned upon.

The address to which you’re sending the replies appears on the next two lines. The address shown is the address of the person whose name first appears on the wedding invitation. So if the invitation was issued by your parents, the lines would contain your parents' address. If you’d like to have the replies sent to you, you must put your name, preceded by your title, on the lines beneath the reply request. Whether you use your address or your parents' address, you should always include an address on your reception cards for reply purposes — even when the same address appears on the invitation's outside envelope. (The one exception: when also sending reply cards.) People tend to discard envelopes, especially when there’s an additional inside envelope. If some of your guests throw out their envelopes and there’s no address inside, they may not be able to reply. This could result in your having to make some unnecessary phone calls.

What is the correct spelling of "favor"?

My wedding reception will include a sit-down dinner. How is that indicated?

In most cases, no special designation is made. Many brides, however, worry that their guests might not know that a meal will be served and will make other plans for dinner. You may alert your guests about the dinner by engraving "Dinner Reception" on the top line of your reception cards.

How do I let my guests know the reception will feature dancing?

While some brides use "Dinner and Dancing" on the first line of their reception cards, it’s usually not necessary to do so. If there’s a band and a dance floor, people will dance.

Although we love our nieces and nephews, we'd rather not have any children at our wedding. How can we politely tell our guests that their children are not invited?

The best solution is to talk to your family members and friends with children and let them know that, although you’d really love to invite their children, expenses (or whatever) prevent you from doing so. A possible compromise might be to invite children to the ceremony but not to the reception. This, too, is best handled by talking it over with those involved.

We're having a formal reception. Where do the words "Black tie" appear?

Thanks for your input Violet and Guilty Pleasure! The reference from the Crane website is definitely helpful on a number of levels. I''m still curious though, how did/are others wording their reception cards, especially if there are two hours or more between the ceremony and reception times? Anyone? 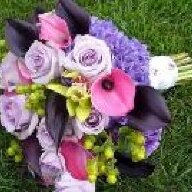 Here is the wording we are using for our reception card... We are about the same as far as time spacing between ceremony and reception, but the sites are just a few blocks away from each other. It seems like you are using a different layout, but just for ideas sake... 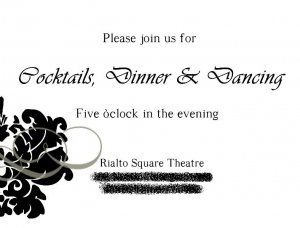 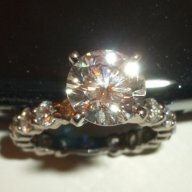 Dinner and Dancing
at half past six o''clock in the evening
Hotel Name
City, State

(The reception is in a different city and state than the ceremony.)

Thanks for sharing your cards Morgie and Lovesparklies. I feel better after seeing some effective ways of wording reception cards. I may go with the cocktails, dinner, and dancing suggestion (which I think would tie in a little better with our James Bond feel than what we have now) and leave out "following the ceremony" altogether. I appreciate all your help!