So glad I found this forum - I really need help with this. I have a necklace in my collection that is from the Victorian Period. Can you please tell me what kind of pearls I have ? Please see the images. Thank you so much for the help! 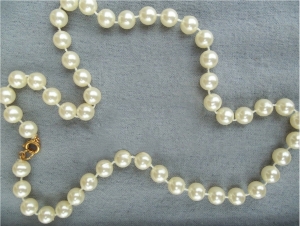 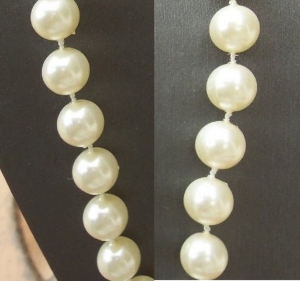 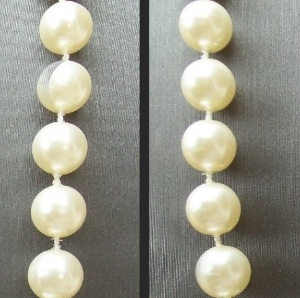 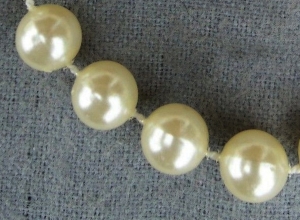 I'm afraid your necklace looks like imitation pearls of the modern era. Here is why:

• The pearls are all very uniform in size, shape, luster, color and lack of overtones. This would not tend to be true of a strand of genuine pearls.
• The spring ring clasp is an inexpensive type of clasp. If I am not mistaken the ring on the other end is a split ring. It is likely there is no karat mark on the clasp.
• They appear shiny rather than lustrous. Shiny on the surface, that is. Mind you, luster shows up best when the pearls are photographed against a white background, but in a highly lustrous cultured pearl, you would expect the circle of reflection in the center of the pearl to contrast more strongly with the surrounding area.

If you are unsure about this assessment, may I suggest a few simple tests you can do yourself?

1. Holding 2 of the pearls, rub one gently against the other. Genuine nacre offers a little bit of resistance, which some people call grittiness, while imitation pearls glide easily on each other.
2. If you have a loupe (10x magnifier), look at the surface. Genuine nacre is very smooth while imitation pearl coating is coarser, a little like orange peel. If not sure, compare what you see with a known-genuine pearl or a known-imitation pearl.
3. Look at the drill holes.
• With imitation pearls you may see swirls of excess coating near some drill holes. (Not necessarily true of the best imitations.)
• The pearl may be beveled toward the drill hole. I think this may be the case with your pearls, judging from the shapes-- they look a little flattened near the holes. (Also not true of the best imitations.)
• Sometimes the coating is peeling near the holes (or elsewhere) if the pearls have been worn a lot. The knots are a bit stretched out on your strand, so obviously someone wore it; you may find a peeling spot. Imitation pearl coating is flaky and thin. You may be able to see the glass bead underneath.

If you still think these are genuine cultured pearls, please post a photo of any flaws you see. Blemishes can be revealing. There are certain flaws that are typical of genuine pearls vs. imitation.

Now with all that said, please let me emphasize that many people enjoy wearing imitation pearl strands! Sometimes they are sentimental pieces if they belonged to someone we cared about.
Also, some highly prominent ladies wore imitation pearls, including Jackie Kennedy and Barbara Bush!
R

Thank you for your help! I agree with you 100%. There are imitation. I can't seem to locate any flaw and near the drill hole of a certain pearl has peeling. Thanks for helping me to put this thing to rest!

This one is for my mother. What can you tell me about it? Thanks in advance! 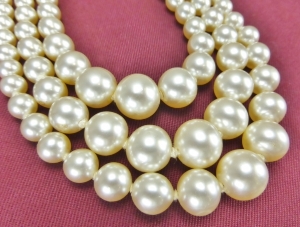 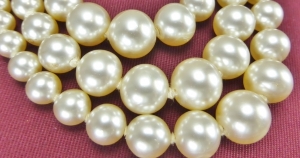 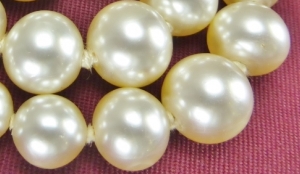 That's not a lot to go on, but see how the pearls are not all round, some are more egg shaped?? There is no bead inside to make them round.

They are most likely tissue-nucleated (as opposed to bead nucleated) cultured Chinese freshwater pearls. Did you try rubbing them together? It would be really unusual to find an imitation strand with so much variation in the shapes.

Is there a back-story to this strand?
R

The only thing I know about it, is that she bought it in Italy. Translucency of the pearls is very amazing and that is the main reason I asked you for help. They are not smooth when rubbed together. The necklace is a 3-row graduate style.

How long ago did she buy them, any idea?
R

That's the right time frame for these being cultured freshwater pearls. I do find that CFWP seem a bit more translucent than bead nucleated pearls.
R

Thank you again! You cracked it right open. I will let my mother know.
R

I am really sorry for bothering you this once more time. My mother loves pearl and she collects them. She has about three dozens of necklace that she collected so far. She also collects jade and jadeite. This one below is a necklace that she wants to trash in the garbage. I said to her that I would like to ask the expert in the forum about it before throwing it. What do you think? Thank you in advance for a response! 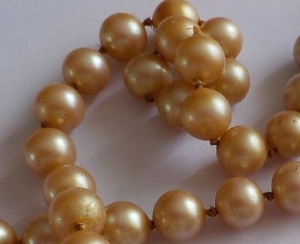 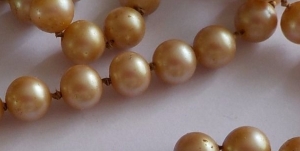 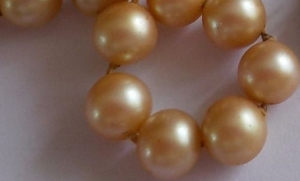 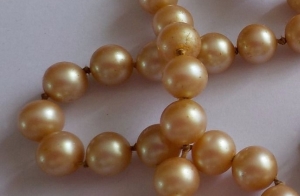 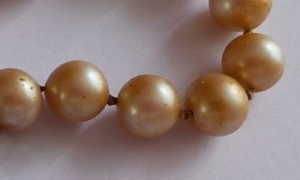 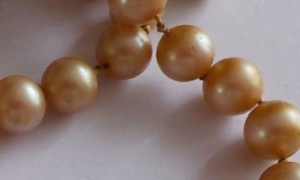 Haha, I love this, no bother! It's my hobby.

They look like freshwater pearls (note how some are a bit eggy shaped) that were dyed to look like golden south sea pearls. They could be nice to wear if given a good warm, soapy bath and then restrung (and it's really easy and inexpensive to restring pearls oneself. If interested I can tell you more.)
R

I wanted to read that in context, so I Googled to locate the source.

"Orient The effect known as Orient refers to the unique play of colours on a pearl’s surface. It is a characteristic common to saltwater pearls but is not usually found in freshwater pearls. It should not be confused with the colour of the pearl which is determined by the colour of the shell in which the pearl formed. Pearls can be artificially coloured or bleached but orient cannot be replicated. Orient is also known as ‘overtones’ in dark coloured pearls."
http://www.australiansouthseapearls.com/glossary

I have yet to see dyed freshwaters that truly look like Tahitians. The colors and overtones aren't right, and often the shape. People write about an "oil slick" look to the colors rather than the overtones seen with real Tahitians.

In the case of GSS, they tend not to be the right color. Often too yellow or brownish, too uniform in color, often with visible dye concentrations in blemishes. And then again, the shape-- the eggy shape typical of many less valuable freshwaters. My GSS have rose and green overtones; I have never seen that in photos of freshwaters dyed to resemble GSS. (I have not seen them in person.)

Large inexpensive freshwaters are often sold as WSS, but they are not white enough-- freshwaters tend to be a bit more warmer white-- and the luster is different. WSS have this dreamy satiny luster that somehow looks thick. FWP may have a shinier surface, or may just be duller, but they don't have that same satin look.

I have seen orient in freshwater pearls- some pretty amazing orient in fact, particularly in baroque shaped pearls. In general orient is seen best in non-round pearls. Metallic white FWP have amazing luster as well, as good as akoya luster. Here a photo of my metallic white FWP-- I think they compete very nicely with akoyas in the luster department. The jewelry manager at Nordstrom thought they were akoyas.

The Chinese have made amazing strides in their bead-nucleated freshwater pearls and now the best ones, brand named Edisons, compete with WSS pearls. It's pretty exciting, I think. I expect they will continue to get better and better.

A long answer to a short question. 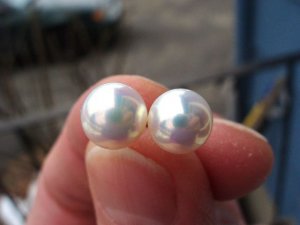