Could someone please give an opinion on this diamond?

Thanks for the reply, Giangi. It does face up white. I'm very pleased with the color...I'm new to the world of diamonds and just hoping I made a good decision on this one. I'm so thankful for this website as it has so much great information that most jewelry stores don't offer. The time for exchanging is drawing near and I just wanted to make sure about the decision.
BetsyA
B

By the way, does anyone know how to gauge the light leakage on this particular stone? Thanks!

So you already own this beautiful diamond??? If yes, congrats

Thanks! I'm one of those that bought before I knew anything and discovered this site after the fact. I'm sorry I didn't know about it before but I've been trying to soak up as much as I can since...

Hi Betsy. You better be careful. This stone might burn your house down. 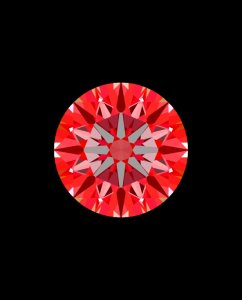 Thank you so much for checking the image. I don't know what any of it means...does this look acceptable? I do see some white around the edges.

Thanks a LOT for doing this for me!

Betsy, the average diamond on the market doesn't even begin to look as good as this stone. Most diamonds will exhibit a significant amount of leakage either under the table or in the outer perimeter of the stone. Much, much more than those little white areas you see in the image.

It's pretty typical to have some white on the edge. The only stones that escape this are usually the super ideals which have had their minor facets "tweaked" to eliminate them, like the EightStar.

Either way, the stone's a screamer.

My guess is that your stone's performance falls somewhere in between these two analysis', which is great scoring.

Disclaimer- The facet arrangement and symmetry of the image will probably vary from your actual diamond, which may affect the light performance indicated. The computer generates an image with “perfect” symmetry, which is rare. Also, the star/lower girdle facet lengths may be different from your diamond. The computer simulation is reproduced best when the actual diamond is being viewed and the image "tweaked" to the appearance of the diamond, or Sarin info is downloaded directly into the program. However, this "blind" reproduction should be helpful in considering the major light performance aspects..
-----------
Rich, non-Independent GG Appraiser
Sarasota Gemological Laboratory
B

Once again, I can't thank you enough for taking the time to run this image for me. I feel a lot better now. I can sleep nights! Ha! The more I read on this forum the more I want to know!

Seriously, after buying this diamond I found this site and the more I learned the more I questioned my purchase. You have really made me feel better. Thanks!

Congrats!!! The IdealScope images look both very nice and this means that your stone is beautifully cut!
_____________
Omnia Mea Mecum Porto.

Thanks to you too! I guess you know what a relief it is to hear good news about your diamond! Too bad they just aren't automatically cut to perfection. Right???!!!

I guess I can forget up the last minute "upgrade" and just enjoy. I must admit that my jeweler could use a few pointers on how to sell diamonds! You get to the point where it is hard to trust anything they say.

I guess what really got me wondering is the the HCA system changed and my HCA score went from a 1.3 (I think) to at 1.6. I started getting a little concerned about what it would become if it changed again! I just had to have another opinion. I'm so glad I did. It helps to see things on paper.