Opinions on this 3 carat stone, please!!!

Okay, here are the stats on this stone. Please let me know your thoughts:

I have also been told that this stone is eye clean. When I look at the cert there are not very many inclusions mapped out, but under comments it does say, "Additional clouds are not shown." I don''t know if this is something I should be worried about. Obviously I would get the stone professionally checked out should I decide to move forward, and the seller has a good return policy. Comments!?!?!

From the certificate (please see below), it seems to be extremely eye clean.
As for "additional clouds", that's quite normal and is nothing to worry about. 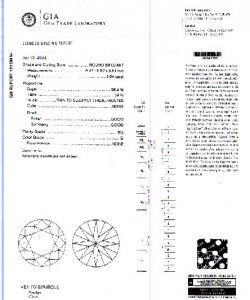 The crown angle is quite shallow... Why don't you look at a smaller stone w/ a higher clarity grade and a better cut? Is the 3ct mark very important for you?

Is it very bad to have a shallow crown angle?

With respect to something with finding something with better clarity, I am only concerned about what I can see. Personally, I would not like to put money into a VS1 or probably a VS2 stone when I believe I can get an SI1 (which would be my preference) or and SI2 that is eye clean.

The 3 carat mark is not that important. I would go smaller. This one just looked interesting to me.

I didn't think the cut on this stone was so terrible. Maybe I am misunderstanding. I realize that it would not fall into the AGS 0 cut grade (53-57 table, 60.5-63.5 depth--or whatever those parameters are). But the HCA is telling me that it could potentially be an attractive stone with a lot of life. !?!?!?!?!

The cut isn't orrible at all... The stone has a nice make, but not super ideal... I just suggested you to keep looking for a nicer (maybe ideal) make, but if you like this stone, go for it! Also, the seller told you that the stone is eye-clean... You're lucky, as I haven't seen many 3cts w/SI 2 that were eye clean! I can't tell the inclusions very well from the plot, as they are a bit faded... Probably it's just the scan. Let us know your decisions! Good luck!

This stone does sound interesting. I would assume the HCA gave it a good score (too lazy to type in the #s myself). The 31.1 crown angle is shallow but not THAT shallow, you should not go under 30 degrees ideally...and your pav angle sounds inline with where it should be. The table and depth seem to almost be the same, that is interesting. This stone will probably have more brilliance and fire than scintillation...be more 'white' sparkly. Have you seen the stone yourself?

The plot on the GIA cert looks amazingly clean for an SI2. I would ask the dealer to clarify where the inclusions are and fax the cert to you so you can see where they are because the cert is a bit faded. But if it does check out, then a G SI2 which is super clean sounds like a great deal.

Hopefully some of the experts will weigh in on the shallower crown angle with their thoughts. Rich, Garry, Rhino everyone else?

There is one thing about the certificate you may want to further research. If you look at the key to symbols, it apears as though the scan was chopped off right below the second key ("cloud"). Thus, it is possible that there are more inclusions listed that were left off of the scan. If this is the case, I am sure it was not intentional, but rather an artifact of the scanning process (images tend to get cropped). I only call this to your attention because this happened to me once- received via e-mail a scanned copy of the stone and when I received the stone with the actual certificate there were a few additional comments under the inclusions key to symbols. Just something to consider. . . Good luck!
G

Thanks for all the advice.

With respect to the cleanliness of this stone, I have been told it is very clean. (It would be an online purchase, so I haven't seen the stone.) However, the seller has a generous return policy (30 days), so if it didn't measure up, I feel confident that I could return it.

By the way, the stone is from Icestore.com. I have enjoyed dealing with them thus far. And they were able to provide a Sarin report for this stone, which most other vendors were not able to provide me for the stones I was interested in. Price is $19,608. Anyone had experience with them!?!?!?!
F

Sounds like it could be a very nice stone. Only your eyes (with the guidance of an appraiser) can be the final judge.

Go for the 3c - I think you have massaged the parameters to get a nice stone at a decent price.

Good luck, hope it is the stone of your dreams.

Hey Google, just out of curiosity, are you a man or a woman?

Anyway, it looks like a pretty sharp stone to me. With GIA grading, it's liable to be a good SI2. They're usually pretty conservative.

I ran the specs through the DiamCalc program, and it came out with great results on the light return (brilliance):

Those are high scores on the light return and (non) leakage, which confirm your HCA reading.

The cut scores an AGA Cut Class 2B ranking, which is considered a fine make, with good to very good proportions. A 2A would be considered very good, with a 1B being a premium make and a 1A being an ideal make. It's the crown angle which drops the stone from a 2A to a 2B ranking. Not the best, but certainly not the worst. A good looking, well performing stone.

I've also attached the simulated IdealScope image which comes up using the specs you listed.

Disclaimer- The facet arrangement and symmetry of the image will probably vary from your actual diamond, which may affect the light performance indicated. The computer simulation is reproduced best when the actual diamond is being viewed and the image "tweaked" to the appearance of the diamond. However, this "blind" reproduction should be fairly close on the major points.
Rich, non-Independent GG Appraiser
Sarasota Gemological Laboratory 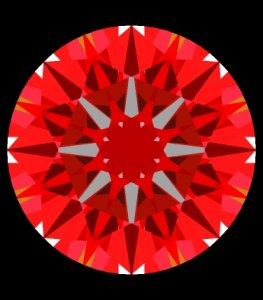 That's a pretty sharp looking stone with light return for a 2B cut!