I love the idea of little doggie shirts

Plus, if she makes a fuss, you can just bat your eyelashes and say innocently "well, I wanted the message to get maximum exposure and the dogs are so cute people will really notice the shirt on them more"

It doesn''t sound like it in this situation, but I''ve learned (the hard way) that different families interpret returning things in a very different way. In my family Xmas gift giving is very casual; often the day after Christmas we would all go to the stores the next day to make exchanges. To me the main point was someone got something they liked (and me as well) and that''s just what I was used to. Personally it seems a waste to keep a present you knew you weren''t going to use.

On the other hand I got the feeling it was frowned upon to return/exchange gifts in my husband''s family and to be the polite daughter in law I didn''t return/exchange gifts given by my husband''s family even if to tell you the truth it was going in a closet.
PREFACE THIS that I love my parents in law and in general we have a good relationship!
Before my daughter''s last birthday, my mil was visiting and asked what my daughter would like. I gave them a catalog where my daughter had circled things of all price ranges to give them an idea, and also letting she really wanted this one particular doll (fairy doll) which was in the price range my MIL stated she wanted to spend. We had also told her there was a couple things (museum membership, camp) that she could contribute monetarily that would really be appreciated. We specifically asked her NOT to get anything with lots of small parts as we are overwhelmed and trying to reduce clutter. She vacillated for a week going back and forth between giving us cash or getting something from that catalog, that doll in particular. Anyways the day before the birthday she she goes and buys ta dah! a set of doll house furniture. Granted it was "fairy themed". I was frankly puzzled because a) she ignored all the suggestions we gave her even though she asked us for suggestions, b) she gave us something my daughter already had (a set of dollhouse furniture) and c) she gave her something that was exactly what we requested her NOT to get (something with lots of small pieces). I returned it for store credit to that store, intending to have my daughter pick out another B-day gift from MIL from that store. When my MIL asked about the present I gasp told her that it was pretty but we returned it as we already had a set of dollhouse furniture (I didn''t get into the rest). Anyways it was like I had murdered a bushel full of puppies. She got extremely upset telling me how offended she was, the conversation escalated, and she demanded that I send her a check for the amount of the present which I did.

Anyways it was really bizarre and made me have more insight in the Israel/Palestinian conflict.

It sounds like I expressed this in a sarcastic way but the "gasp" was for you all! To tell you the truth although I can laugh about it now it was definitely not funny when it happened. 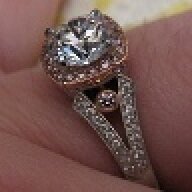 She is pretty passive agressive. I called my hubby to tell him about the e-mail and he told me that he also received an e-mail asking if we were mad at her because we hadn''t called her recently, and went on and on apparently about how much she missed him.

I will probably either donate it...or give it to my Mom (breast cancer survivor). Either way, I''m absolutely not in a million years buying some store mannequin. No way.
Click to expand...

I really feel for you on the MIL. Being that she''s passive aggressive, why not send her a message by you and DH avoiding contact with her, and only calling her on special occassions. Clearly your MIL feels she can disrespect you and DH, and if you don''t let her, you don''t have to deal with it