Not a political meme, despite its appearance

I've stayed out of the US political threads because I'm Canadian.

Apparently, 'we' look for a leader who believes that 'budgets will balance themselves'.

Anyway, thought this was cute and wanted to share it.

NOT meant to poke fun at Americans! I LOVE you guys!

And, like I said, I'm Canadian. Our current leader ... 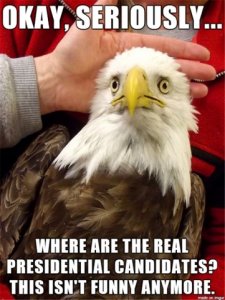 I thought Canadians were all happy with their leader? That appears to be not the case?

The 'love affair' is portrayed by our media.

Leading up to our election, I experienced the same horror as the eagle in the meme.

I said 'If he gets elected, I'm leaving Canada!'.
Seriously. Sound familiar?
With respect to Americans who have stated that they'll relocate to Canada if a particular candidate is elected, I suggest they do their homework.

May his father rest in peace, but I hated what he did to my beloved country while he was doing it.
The results remain with us to this day and have divided our country.
I'm referring to the language laws of the province of Quebec.
Companies in Quebec must have French names, displayed in a larger font than any other language they might want to include.
Want to do business with a Quebec company, your correspondence needs to be in French.
Yeah, freedom of speech as long as its French.
Many company headquarters that were located in Montreal, Quebec, left the province and moved to places like Toronto, Ontario.
Some American companies told to correspond in French decided it wasn't worth the hassle and expense of translating stuff.

I don't have an issue based on language.
I have a big issue with taking away certain rights.

As for our current leader.

Its a big party. No need to worry about topics such as economics, finance, national security or international affairs.

Monarch,
I promised myself that I'd stay out of political debates for the next three years (when our next federal election takes place).
Many times while typing this post I considered deleting it.
I don't want to discuss politics, so I shouldn't be opening this can of worms.

But, no, things aren't always as they are portrayed in the media.

I really do connect with the shocked and horrified eagle in the meme.

I love my country.

I didn't relocate because family and friends are here.

Wow! What a long post considering I've banned myself from the topic of politics.

The good thing is that the length of this post will discourage anyone from actually reading it.

Haha love it. Thank you for sharing December Fire. And I read your whole post btw.

Last night I caught the end of The Big Bang Theory and at the end this was Chuck Lorre's vanity note. Truer words were never spoken for this American. 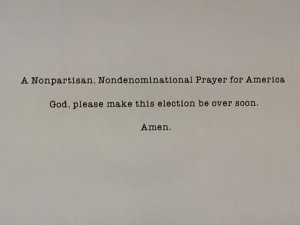 “Until one has loved an animal, a part of one's soul remains unawakened.”
― Anatole France
C

December I read your post a couple of times, had to go back and make sure it wasn't I that posted this lol Agree with you 1000% I wonder if other countries have a Language Police, we are a priveledged people now aren't we.

I'm sure there are many who share that same prayer for the election to be over!

I just hope they keep in mind that the election outcome will impact their lives more than the election process.

Everyone get out there and vote!

Not voting also has an impact on election results!

I wish nothing but the best for all Americans and their beautiful country.

Its easy to point out problems, and no country is without its challenges, but don't forget all the wonderful things that you've accomplished and continue to strive to achieve.

December I read your post a couple of times, had to go back and make sure it wasn't I that posted this lol Agree with you 1000% I wonder if other countries have a Language Police, we are a priveledged people now aren't we.
Click to expand...

You read that novel twice!

Unfortunately, I can be a bit of a volcano with some things and will, inevitably, erupt from time to time.

If it were only the discriminatory language laws, I could take a 'stereotypical Canadian view', put on a false smile, give a little shrug, and go back to tending my herd of unicorns.

But the fluffy, love-everyone, hug-it-out, grab the credit card and car keys (neither of which belong to you), check your hair in the mirror, run out the door (without turning off the lights or locking the door behind you), jump in the car, crank up the music and party on attitude, just aren't what I'm looking for in a leader.

However, I am Canadian so I'll say two nice things about Baby Justin's Liberals.

During the election process, two gentlemen came to my door to ensure that I knew voting Liberal would result in two fluffy kittens for everyone and double rainbows every day.

They started their sales pitch saying that, of course, I should vote for Justin Trudeau and his Liberals because they'd fix the potholes in the road. Surely, I want that, right? I pointed out that potholes aren't a federal issue and we have a Liberal provincial government so these gentlemen should be taking up the pothole issue with their own party. But I did add that it was an approach that would probably get Trudeau some votes from people who didn't understand it wasn't a federal matter, because the key is to talk in terms that people will understand and with which they'll identify. So half marks in Marketing.

I brought up national security and international affairs, both federal responsibilities. These two fellows, both in their late 50s or older, then proceeded to tell me that there would be nothing to worry about when it comes to national security if we would "just stay out of it and not talk about ISIS." I asked if, based on that logic, they believed that we never should have gotten involved with WWII. One man sputtered and the other man nudged him to silence him. I told them that Canadians are not 'Peacekeepers'. We don't go in to 'keep' or 'maintain' peace. Sitting on the fence, not taking a stand, staying 'neutral', hasn't been our military history - thank God!

Nice Comment Number One: I felt good after chatting with them. Although it was, perhaps, an evil-based feeling of good. Like re-holstering your pistol after shooting the bad guy outside the Saloon.

Let me have another shot (get it) at being nice.

), and asked her about the Liberals performance on the financial and economical front. During the discussion, she became increasingly annoyed based on her facial expressions, but she didn't have any counter-points to make. My boyfriend's teenage son was at my house and had come to the door with me. After the woman stormed off, he commented that she really wasn't happy with me.

Nice Comment Number Two: I was provided with the opportunity to point out that an important skill, especially for someone wanting to be a politician/leader, is to do your homework, know the issues, have a view with substantiating facts, and be able to communicate and debate with others in a calm, respectful manner. I noted that this woman wanted my vote, had my attention and interest in her views and rationale, and had nothing to offer other than her smiling face when the conversation started. I was always polite and calm, and wanted to hear and discuss the issues. I definitely wanted to hear her points of view and reasoning. It was a perfect opportunity for her and she blew it. It was a great demonstration of what not to do, and I appreciated the learning opportunity it presented to the teenage boy.

OK, no more political talk from me!

I'm going back to being a rumbling volcano ... until the next time I erupt and throw around more politically-incorrect comments.

"We can complain because rose bushes have thorns, or rejoice because thorn bushes have roses." Abraham Lincoln
C