Ok I need honest opinions; yvonne has a pair of 5mm mint garnets... what do the experts think about the colour.

I love the pictures but if I'm paying for a mint I want 1 that's truly representative of a mint... are these it?

Or are they too yellow... with no blue modifier?

Thanks!
Nothing eat's happiness faster then comparison... 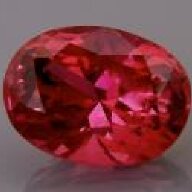 I think that you have asked a good question.

I like these gems because they are round, which is somewhat of a rarity in green garnets in general, and seem to be clean. Mint garnets can be difficult to shop for because green can be tricky to photograph. For example, I purchased a stunning mint garnet from Gene. In his pictures, the stone looked to be a little grey but in person it has absolutely no grey modifier and has a slight blue secondary hue.

I have purchased five mint garnets and kept three out of those five. The three that I kept all had a blue secondary hue that was pretty obvious when first opening the package and these stones also have a neon quality to them in most lighting conditions. The two that I returned either had a yellow secondary hue or a grey modifier.

1. Do you want a single stone or it has to be a pair? I think there is a slight premium for a matched pair, especially for rounds.

2. No pics for us? People have varying definitions of mint garnet = light green, a little yellow, and a little blue. Which is your preference?

3. You are in the UK or somewhere that has import taxes, right? Can someone be your eyes here before buying it? Maybe a video? Don't forget to ask about indoor vs outdoor.
Sometimes the mind ignores what is logical because the person cannot accept the reality of what it is.

Thanks for your replies both. Chrono I want a matched pair for earrings. Yes I'm in the uk and yes we get taxed so sending it back wouldn't be an option. I unfortunately don't have anyone that could check it out for me in person!

As for my preference, for me the exclusivity of a stone has a massive impact... although I do have to find the colour attractive too. I like the colour of these but when I read bluish tones are more sought after... It somewhat dampens me.

But to be honest the bluish ones I've seen online havnt been very saturated so I don't know if I would really like blue undertones or if I just havnt seen a good example.

I don't normally like yellowey greens but I think the prospective sparkle/brilliance in these stones are whats attracting me to it as well as its name. Pics to follow
Nothing eat's happiness faster then comparison...

Pictures. It's the same colour in all the pics! 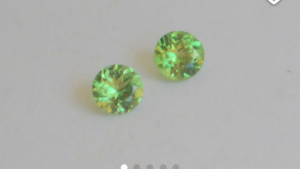 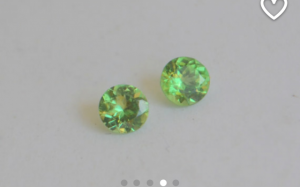 Nothing eat's happiness faster then comparison...

Gingercurls please could I see your mints with the blue if possible? These have been confirmed to have a yellow undertone and no blue.
Nothing eat's happiness faster then comparison...

Various shades of greens and lots of very saturated slightly bluish green garnets here:
[URL='https://www.pricescope.com/community/threads/show-us-your-green-garnets.215814/']https://www.pricescope.com/community/threads/show-us-your-green-garnets.215814/[/URL]
Sometimes the mind ignores what is logical because the person cannot accept the reality of what it is.

Haha I just found that thread a couple of hours ago and been going through it repeatedly! What do you think of these ones? Please totally honest opinion.

Also would these be considered nicely saturated (what level?)
Nothing eat's happiness faster then comparison...

I am so partial to those with a blue hue that it's not even funny, therefore my opinion of the pair is going to be incredibly biased.

Sometimes the mind ignores what is logical because the person cannot accept the reality of what it is.

Lol Chrono I swear I am the same!!! I normally don't like light green let alone ones with a yellow undertone... but I don't know why these stones are just really stuck in my head.

The thing is I don't understand if I am truly attracted to the stones themselves or just wanting to be able to say "I own a melarani mint". I can't seem to seperate the two issues in my head!

Oh also, for what they are (NOT mints with a blue ) are they nicely saturated? If I do get them I want to know they are great stones anyway (just without a blue undertone).
Nothing eat's happiness faster then comparison...

Ok I've taken the plunge and just brought them! Damn my crazy impatient side

Yvonne provided some hand shots; just ignore the peridot in the middle 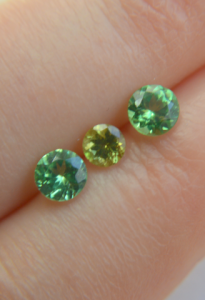 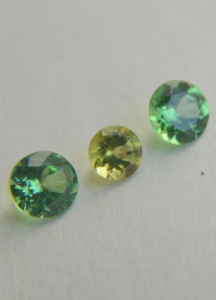 Nothing eat's happiness faster then comparison...

The colour looks much nicer in the hand shots - more of a bluish green. Hopefully the stones will resemble these last photos, rather than the ones on her website. Good luck with your earring project. 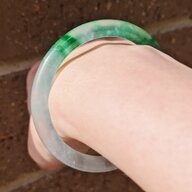 Garnetgirl|1460511322|4018546 said:
The colour looks much nicer in the hand shots - more of a bluish green. Hopefully the stones will resemble these last photos, rather than the ones on her website. Good luck with your earring project.
Click to expand...

To be honest I really don't mind the fresh minty green colour if it's as saturated as it looks to my eyes it's a really fresh and vibrant colour. Not one I've ever gone for before so will be interesting when I open the package.
Nothing eat's happiness faster then comparison...

How long will it take to arrive?
Sometimes the mind ignores what is logical because the person cannot accept the reality of what it is.

Ages yet Chrono, I've done a 3 month payment plan just to make myself space out my purchases

Ive put most of my spare funds into the pendant I'm doing with the black opal n pallasite peridot... and that's still a few months away too. Oh so much waiting ahead!
Nothing eat's happiness faster then comparison...

I was recently reading about kornerupines after I came across the small grass green ones yvonne has in her shop. I love the rarity factor (when don't I) and the fact that I kept going back again and again to the stones; I loved the bright green colour that much.

(Am I actually falling for lighter greens??? I've hated that colour all my life

So long story short, I have an awesome idea for my mints earring project (sorry I can't share it just yet ) and I realised I needed the kornerupines..... so here they are with my mints (mint garnets being the bigger ones). 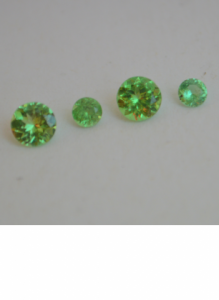 Nothing eat's happiness faster then comparison...
You must log in or register to reply here.
Be a part of the community It's free, join today!
Jewelry Blog