Here is my long story that I have promised for some time now (I will try to keep this as short as possible). I am also posting this on pricescope first then diamond talk…because that is the way I found both. Beginning in April I began my shopping journey. I began as most do, at the mall. After listening to slick salespeople that tried to get me to put “good faith deposits” on merchandise that I (1) couldn’t afford and (2)didn’t like, I got tired and quit the mall. Next step small local jewelers. The selection was small but the prices were a little better. I had a local jeweler tell me “Diamonds are like women, what is on the outside really matters, not the inside, you don’t see the stuff on the inside.” Flabbergasted, I left and decided to start my online experience. It began horribly…In my mind I could find a great deal on ebay…I couldn’t have been more wrong. I saw a princess cut 1 carat EGL diamond for auction and started the research process. I found pricescope and posted the measurements. 3 or 4 people told me to stay away from the ring because the depth was around 82%. The depth was even explained to me, I remember someone saying a 1 carat that deep will look considerable smaller. Me being thick headed, I bid on and bought the ring. All along at every jewelry store I knew when I saw what I wanted I would be 100% sure. When this ring came I was 100% sure I hated it…it was a miserable ring with no shine. It was dull, dull, dull, not “white, white, white” as described in the ebay advertisement. I called and after some nervous explanation why it wasn’t good for me she agreed to refund my money if I would take some nice digital pictures of it so she could re-list the ring (interestingly enough she relisted with the same old photos that didn’t show how “deep” the stone was. No side shots. On to the next experience. Now that I have found pricescope and DT I can read all about diamonds…I was in heaven. I was also realizing I almost made the worst mistake of my life if I had kept my ebay purchase. On to Jonathan at GoG. I read through his whole entire site. I found it informative but confusing to navigate (I know many people LOVE this site…I did say it was informative so don’t yell at me) I decided contact Jonathan and see what he had to offer. He had a SuperbCert .90 carat SI1 G color that I was considering purchasing. I emailed and never heard a response (even after “OK all emails are now caught up was scrolling on his website) so I decided to call the number posted on the site. It was his cell phone and he was on his way into work. I can’t put my finger on any one thing but I just did not get the feeling he cared (again I know many people LOVE this guy) anyways I guess he may have been having a bad day. But it was clear he wasn’t the one for me. Next up DirtCheapDiamonds and Jim Shultz. WOW. That is all I have to say. Wow. Luckily I was close enough to visit Jim. I was absolutely blown away at how I was treated. First, on the phone I told him what I was looking for and he brought in 4 diamonds for me to compare. I was leaning (very hard) towards one stone. It was a GIA I color SI2 clarity with “Hearts and Arrows” and “AGS 0” printed on the small packet the stone comes in. The sarin measurements are at home, I can post them later. I was VERY worried about I color because of you guys!!! When I saw the I in line with 2 G’s and an H I realized what an idiot I was. PEOPLE, YOU CANT TELL THE DIFFERENCE. Not to mention the I had Med Blue Flour which made the I truly look better. Even though it was an SI2 it is eyeclean. Jim held all his calls and spent over 3 hours with me. We looked at and compared all the diamonds under every possible light combination, magnification, 3 different types of viewers, blacklights, special photo bulbs, jeweler lights, in settings, color trays etc. He gave me what no other person did. He made me feel comfortable with my purchase. He is honest and trustworthy. We weighed my options and agreed the I fit all my qualifications. I would STRONGLY recommend Jim Shultz at DirtCheapDiamonds. I have attached a picture of the actual proposal. We have been together for 5 years. I took her to the inlet at sunset with her family watching. I separated her from her family and talked to her for a few minutes telling her how I felt. I gave a signal to her dad (he had the ring) he walked over with her mom (who had no idea what was going on) and handed me the ring…I dropped to a knee and the rest is history!!!!!!!!! Millions of thanks to pricescope and DT. I will post the setting story (Leslie at whiteflash BIG thumbs up) and the picture of it on her finger in the next post.

forgot to tell you

let me try to attach again 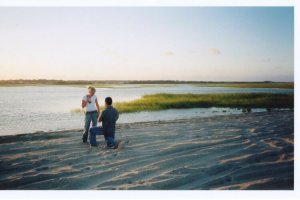 awww...brought tears to my eyes. Best wishes on your impending marriage and here's to a long life of happiness.

I'm glad you found a good match for your diamond purchase. Sounds like a nice stone - the med. fluor probably makes the stone face up a better color grade. Can't wait to see a pic of the ring in the setting. Your the one with the Vatche right? My Vatche setting comes in next week - can't wait.

Oh, and I think we discussed the jewelry stores that carried vatche - here's my experience. This very high end jewelry store ordered in a setting that was the vatche 3 stone ring w/ bag. on the side - but in a smaller carat weight - just so I could see the style in person. If they could get close to the price I had then I would have bought it from them. I tried the ring on. When it didn't sit flush w/ my wedding band, She said I could get the matching ring ..........HELLO - THIS IS MY WEDDING BAND. THEN, when that didn't fly....she suggested that I solder my Gemloks to the Vatche setting.... I walked out shaking my head. Do people actually take these jokers advice?

I can live w/ the gap...my other rings molded to fit the band any way.

Proposer, Thank you so much for taking time and sharing your experience!

The story and the picture are extraodinary!

Good luck with your marriage

What a keepsake that photo is! I know no one who has a pic of their actual proposal! You obviously did the proper (but scary) thing and asked her father for her hand in marriage. Good luck. I will have to show my old married friends that pic........we women are all romantic at heart.
P

here is a pic of the ring on her hand...I dont think it does it any justice but I thought you guys would like to see. 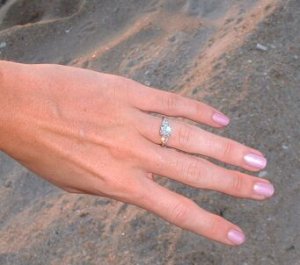 dinosaur... one word. CONGRATS!!! I agree. Given that you do live so close to Jim he can offer you live service conveniently whereas I am very very far from you and I can't blame you in the least. IMO, there is a tremendous value in being able to talk with the person you are purchasing from face to face.

I am very very particular (maybe too particular) when I am hunting down princess cuts for clients since there is a lot of disproportioned stones out there so I do offer my apologies if I wasn't too excited about what I knew was available at the time you called.

My only concern for any client who contacts me for a stone is that they are 100% satisfied with their purchase even if it is not from me. I try my best to satisfy but my hat is off to Jim for being able to fill your need. 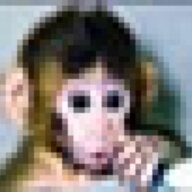 Just FYI: i think what jonathan said about seeing the diamond in person and working with someone one on one is key. . .my b/f and I went to GOG and were flabergasted by the amazing attention, dedication and time they gave us inorder to learn more about the stone and make an informed choice. Our experience with jonathan sounds very much like your experience with jim.
anyway, just wanted everyone to know the care and precision given to us at GOG

What a beautiful story and the picture is swoonable. It's very sweet. You will have to get that blown up and framed for your house...I'm a sucker for beautiful pictures like that. The colors are great too.

Congratulations and best wishes for the future!

The ring looks beautiful...fiancee has nice hands too!

Is this an error Leonid!

A post that is 1 year old is pulled up and reposted by MONKEY. Why! Is this a first anniversary for proposer?