My aunt's sapphires (a cautionary tale) 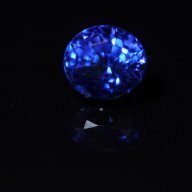 Recently my parents and I went to go see my aunt and uncle. My aunt loves gemstones and started selling jewelry about five years ago (mostly an out-of-her-home operation... you can probably figure out that this is code for "buys lots of jewelry and occasionally convinces one of her friends to buy a piece from her), meaning that she and I have found a subject we can talk about together! (Before this, we had nothing in common.) However, my aunt... is in general a big fan of quantity over quality. On previous visits she's done things like show me a hideous opaque star ruby -- and don't get me wrong, I actually like opaque star rubies and have a couple of my own, but this one was truly hideous -- and proclaimed to me, "It's thirty-seven carats!"

Anyway. During this visit, my aunt showed me a blue sapphire she got at a recent gem show. She'd been able to score an awesome deal! It was a 7-carat sapphire, I think. I was very impressed because as I've said, my aunt usually tends towards the hideous-but-large gem, and this one had great clarity and (though maybe just a trifle dark) amazingly saturated color -- that deep saturated blue that's so beautiful. She bought it wholesale (because of her jewelry business) and got a great deal: only $7000.

So I was impressed by my aunt! (Hey, I know, I should have clued in at this point, but I can't afford to buy 7-ct anything, so I don't have a good idea how prices scale!) But the clue dropped on even my thick head when she brought out the matching pair sapphire. Yes. That's right. She had TWO 7-carat sapphires with perfect clarity and saturation. Which were also perfectly matched in size. And color. $7k each.

(At this point I started asking questions like, "Have you sent these to a lab?" "No, why?")

The even sadder thing is, as I said in the first paragraph, she actually tries to sell things to other people. So there's probably some poor sap out there that she's going to try to pass on these stones to. 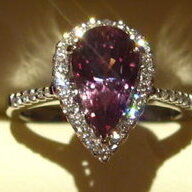 Is there any way that your Aunt has any documentation that says these are "natural untreated sapphires" and did she pay with a credit card? It may be that she can get her money back if she has anything that proves to be incorrect and perhaps the credit card people would take up her fight? Certainly I would get a lab report.

It doesn't sound good but you never know .............. stranger things have happened ............ remember the tale of the Emeralds found by a shepherd or whatever that odd story was? Turned out to be real Emeralds!

To celebrate your found common interest, I think you should give her a present of a book, like richard wise's, so she can learn on her own without the humiliation of you telling her directly that she may have been swindled.
When the people shall have nothing more to eat, they will eat the rich.

LD.... yeah. I don't even know if she got a receipt for them being untreated, although I suspect not. I'll ask her maybe the next time I see her. I suppose if she doesn't try to resell them she can just enjoy them... sigh.

Though, VapidLapid, I kind of like your idea. She doesn't read much, but perhaps she'd make an exception for a book on shinies.
You must log in or register to reply here.
Be a part of the community It's free, join today!
Jewelry Blog