I am interested in Paloma Picasso''s Sugar stacks rings. They have transparent stones like amethyst, citrine and rubellite etc. and opague stone in chalcedony. I like to know more information about chalcedony. Thanks. 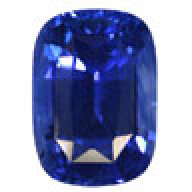 It is in the quartz family (but unlike amethyst or citrine in the way it is formed). It can come in a lot of different colors.
Adam - www.RioGems.com
C

Chalcedony is a cryptocrystalline member of the quartz family. It is not made of one crystal as citrine would typically be; it is made of many small crystals. It is readily dyed and comes in darn near any color of the rainbow. Some popular chalcedony forms are aventurine, bloodstone and carnelian. It is very durable in everyday wear in general.

Since some of these folks may not know the lingo, "crypto" means "hidden." For instance the study of code-breaking (finding hidden messages) is "cryptology." So the word "cryptocrystalline" means that the crystals exist but are too small to be seen by anything but very strong microscopes.

Cryptocrystalline quartzes are mostly variations on chalcedony. Agate, for instance, is defined as banded chalcedony. Jasper is opaque chalcedony. The classic definition of jasper calls for it to contain iron and be red but usage of the terrm has grown to include many colors. Separating agates from jaspers from chalcedonies can sometimes be a trying task!