Now I’ll start a little blog on an OEC (Old European Cut) diamond men’s ring I bought a year or two ago at a local antique show. It’s about 0.7 carats in size, set in an early 20th century men’s ring. It seems to have a good color, I’d guess about an F. There are only a couple of specks visible with a 10x loupe, but none visible to the naked eye, so I’d guess it’s an SI1, maybe an SI2. It seems to have quite a bit of dispersion (fire). Also, it seems to just have a nice pattern of sparkle or of reflection that’s different than the modern brilliant. Guess that’s why I like antique cuts! 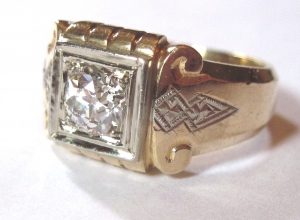 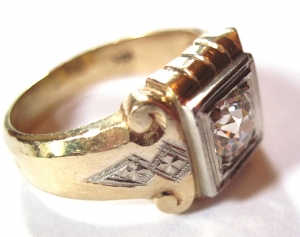 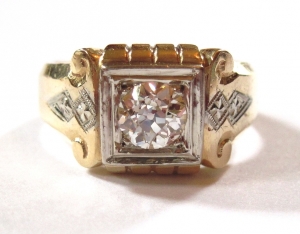 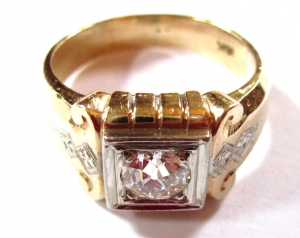 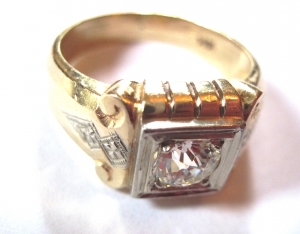 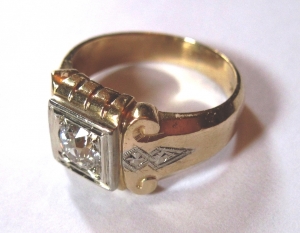 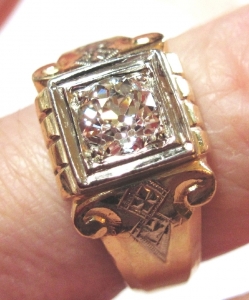 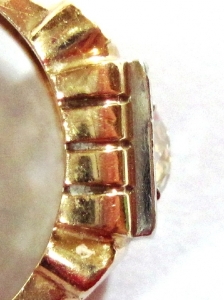 The last photo is a profile of the diamond for those who want to check its vertical profile. I'm no expert on these things, but I'll attempt to pass on a bit that I know: OEC's are one of the predecessors of the modern brilliant cut that we all know. It is relatively tall from top to bottom (when viewed from the side) relative to the modern brilliant. Also, the table (the flat, octagonal top facet that faces up) is relatively small. I believe that those characteristics would be seen in this diamond. I don’t wear this ring often, but every now and then I put it on for a little variety. 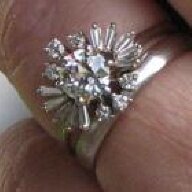 Sylvie
**My tastes are simple, I simply like the best**
**English is not my first language, please be kind !**
J

Mike,
Thanks for sharing your very cool vintage 1930s ring with us.We don't see enough gents jewelry on the forum and this ring was well worth sharing! thanks
P

Thanks, Jewelerman! Do you know that I used to consider diamonds boring because I thought they were all the same. Seen one; seen 'em all. Now I know that that's not true and that no two diamonds are exactly alike. Get turned onto antique diamonds and you could spend the rest of your life just learning about them. The other thing I've come to appreciate is their durability. I'm an active guy seem to use my hands a lot. Most any other stone with the possible exception of a sapphire/ruby would be damaged by me. Not that diamonds are indestructible, but they're pretty darned tough!

That stone is a little firecracker!