I wanted to give an account of a recent experience with BGD, as an unhappy and displeased customer.

A couple years back, I purchased my wife's engagement ring from BGD. It was a platinum 3-stone Crossed Trellis:

BGD were great to work with. I had nothing but good to say about my dealings with Catherine. The ring was much larger than either I or my then fiancee expected, and she loved it. The appraiser I took it to locally felt that we got an astronomically good deal; it would cost him 20% more to replicate it.

Early last year, we shopped around for wedding bands. After looking at several options locally, my wife favoured a custom designed 5-stone ring that would match the width and design of her engagement ring. Given my past good experience, we decided to purchase a custom band through BGD as we felt they could best match their Crossed Trellis.

We worked with Catherine to develop a concept for a custom ring. We based the concept on one of their off the self 5-stone settings, with some tweaks to some of the curves in the profile to make it more look like a 5-stone version of the Crossed Trellis. Shared prongs on the 3 centre stones and 3 prongs on the outer stones is the kind of design we were thinking.

We sent my wife's engagement ring back to BGD last February so that they could better match it. We were led to believe that they had the original CADs from Ashley's ring and could use these to make sure the two rings were properly matched. Catherine indicated that she would let us know when the CADs were ready.

After BGD had my wife's ring for a couple of weeks and we still hadn't heard anything about review of the CADs, we attempted to contact Catherine, discovering she was on vacation.A day later, we received an email from Leslie. She sent pictures. The ring was ready; not the CADs, but the finished product. We weren't given an opportunity to review any CADs for what we were told was going to be a custom ring.

The ring did not match our vision. In fact, all BGD had done was take their off-the-shelf 5-stone setting and change the outside prongs to a single prong. No modifications were made to the lines or the profile.

At this point, Brian joined the conversation. Over the next day, both Brian and Lesley attempted to push the ring they had already manufactured on to us, telling us that, in their opinions, it matched. "Keep in mind that the ring is small and the pictures are much larger, so it will look less different in person."

My wife was less than pleased; in fact, she was borderline hysterical. We were spending $3,000 on a custom ring that we had no real input into, and didn't even come close to her vision of her wedding band. This is really the point when we should have stepped back, asked for our money back, and walked away. A local designer we've come to trust had quoted approximately the same price for a ring that he would have custom designed with the same quality of stones, so we weren't saving anything by accepting the headache.

After some back and forth, BGD changed gears and committed to redesigning a ring. We then worked closely with Brian and Lesley on CADs to design something that would better give us the look we were after.

This wasn't without its challenges either, though. At one point, we had asked for something (specifically, a little more elegant end pong on the end stones) and were told by Brian that "he couldn't do it" so we asked him to show us what he proposed. The next morning, he sent CADs that exactly matched what we had asked for, so we asked what had changed and were not given a solid answer. We asked if the design would compromise the security of the stones. He said, point blank, that BGD would not sell a product that would not securely hold the stones.

We received the new ring a couple of weeks later, in April of 2015. The final product closely resembles a 5-stone version of a Crossed Trellis.

One of the side stones was loose.

We called BGD. We were told that "sometimes a stone loosens during shipping". We took the stone to an appraiser to inspect and repair, as recommended by Brian and Lesley. He tightened the stone.

The ring went into storage for 3 months until our wedding in July. We were married on July 18th at a lovely, intimate wedding.

Now, to give some idea of how my wife wear the ring. She wears it with her Crossed Trellis, separated by a small platinum spacer. The Crossed Trellis diamonds are much higher than her wedding band, so the setting rarely, if ever, hooks on anything as the engagement ring gets in the way. She typically wears it only during the week to work, where she works an office job, sitting at a computer for 8 hours a day. She has a cheap, plain band that she typically wears on the weekends, when active, when travelling, or when doing anything with her hands. Her diamond rings don't see any abusive wear.

Fast forward to January, 2016. My wife noticed that one of the end stones was again rocking in the setting at the slightest provocation. We contacted BGD. Lesley advised that we could send it back and they would inspect the settings and repair as needed. We sent it back. BGD tightened the stone and we received it back by the end of February. They paid for the shipping and covered it under warranty, but stated that this was "normal wear and tear" and, in the future, would not be covered under warranty.

We received the ring back the next day. The stone was still loose. We spoke with Brian about it. He was very insistent that he inspected it before they shipped it back. There was no way it was loose; we were imagining things.

We took it to an appraiser for inspection. Without telling him what we thought was wrong, we just asked him to inspect the setting. He said that one of the stones was rocking and we should get it tightened, confirming what we saw.

We noted this to Lesley and Brian, who said that they would reimburse us if we got it tightened locally. We did so, and were reimbursed.

Now, 10 weeks or so later, we took it to our local jeweler to look at and the stone is again loose. We've only had the ring for a year and the stone has already been tightened 3 times; this is the fourth time. We suspect it's because there are only 3 prongs on the outside stones.

We tried to contact Lesley twice in the last two weeks without success.

We're at our wit's end. We're not sure what we can do at this point. The setting is under warranty, but it doesn't seem that matters for much of anything.

We're thinking we're going to bring it to our jeweler here and ask what options he can give us.

Alternatively, we're considering cutting our losses and having the local designer design us something more secure using the stones from this setting. It would end up being a $2000 mistake. 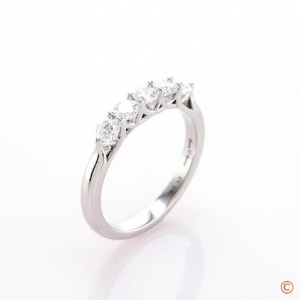 Sorry to hear about this. What a pain!
You must log in or register to reply here.
Be a part of the community It's free, join today!
Jewelry Blog