My limited experience in the real world with diamonds leaves me with many questions. To that end I''m asking that anyone with pics meeting the descriptions below please posted them for my (and others'') edification. If there are things you''d like to see feel free to add to the list.

1. Diamond that looks "milky" or "oily" due to fluorescence. I suppose this is both rare and difficult to catch on film.

2. Diamond that has grey tones rather than yellow or brown. Especially if it is a lower color.

3. A really low colored (but not fancy) yellow diamond. Or are the WXYZ colors reserved for browns only?

4. A nail head and fish eye side by side (these are different, right?). Sorry Rich, no simulated photos.

5. Photos of naturals. I think these are cool-looking.

I'll keep an eye out for some of these stones while I'm appraising, Rank.

In the meantime, here's a photo of an Old European Cut I appraised recently with the "fisheye" effect. The girdle reflection from the shallow pavilion appears as a white "ring" just inside the table outline. 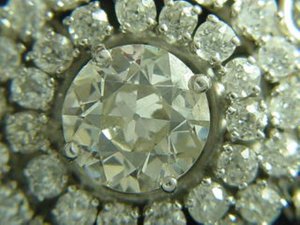 You didn't ask for this, but I thought it was a cool photo illustrating different strengths and colors of fluorescence. 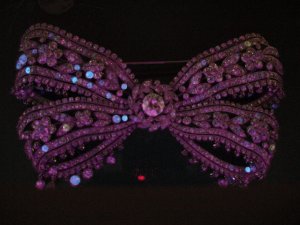 The next two photos illustrate the dark (nail head) center typical on stones with deep pavilions. These stones are both Old European cuts. 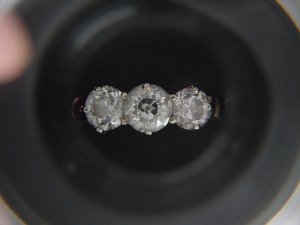 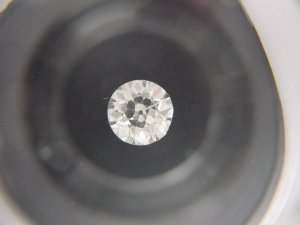 Very cool pics Richard, and a very cool idea for a thread, RA!

I was thinking that (following Richard's lead) some other pros might post any pics they think are interesting (whether on RA's list or not). This could be a fascinating thread for those of us without firsthand experience with this kind of stuff.

" thread here on PS from a while back. I always thought that was a very cool inclusion, so perhaps belongs in this thread too. (More interesting pics of that inclusion can be found at the referenced link above.)

-Tim
[/u]
"Economy of words has never been my strong suit"

Great pic of the fisheye!

----------------
On 6/5/2003 12:38:25 AM optimized wrote:
Since I don't have any interesting pics of my own to post, I'm going to boldly and shamelessly "steal" one of Robin & Todd's pics from their interesting "Dragon shaped diamond crystal" thread here on PS from a while back. I always thought that was a very cool inclusion, so perhaps belongs in this thread too. (More interesting pics of that inclusion can be found at the referenced link above.)

Thanks for the thought Optimized, but we don't consider it "shamelessly stealing" because (1) we've already posted the picture here on PS for people to see and thus you are merely bringing it back up for other enjoyment of other people who may not have seen the thread previously; and (2) because our URL is on the picture and thus we are referenced wherever it goes; and (3) because the dragon crystal just happens to be one of the coolest formations of diamond crystals we've ever seen and it put a smile on our faces to see it again!

Since we're on the subject of inclusions and diamond crystals, we'd like to clarify what the most common types of diamond crystals are because it seems to us from the questions we receive that many people may not be aware of the different types...

Essentially you have "crystals" of which a picture is obviously provided above... It is essentially nothing more than a small diamond crystal which was encompassed by a larger diamond crystal as it formed. A crystal can appear light or dark within a diamond and that color can often be changed by changing the light source and the vantage point from which you are viewing the diamond...

A "needle" is simply a long, thin diamond crystal and is named as such because it often looks like a sewing needle when viewed under very high magnification... Needles are often extremely difficult to locate.

A "pinpoint" is merely a pinpoint size diamond crystal and depending on the location within the diamond, they can cause your eyes to burn out trying to find them... They tend to be easier to locate within the table facet of a diamond, but even then they tend to require higher magnification such as 40x - 50x to really identify.

A "cloud" is simply a collection of pinpoint size diamond crystals, these are indicated on most diamond grading reports as a circle or perimeter of tiny red dots... A cloud can be very small and contain only 3 - 4 diamond crystals or it can cover a large area of the diamond and look similar to the Milky Way Galaxy when viewed under higher magnification... Small clouds are generally nothing to be concerned about, but larger clouds should be casrefully evaluated.
Click to expand...

Cool thread. I've bookmarked it. Keep the info & pics flowing! A picture is worth a thousand words.