Many of you know and respect John Pollard, who has been a contributor here for many years. John is giving a presentation this week in Washington D.C. at the a American Gem Society Conclave. I wish it was open to the public for those of you who live in the D.C. area as John is a dynamic speaker.

If you do not already know how well John is thought of in the jewelry world, he has been a presenter at JCK in Vegas and in other USA diamond conferences as well as speaking several times in China at major jewelry related conferences. The AGS Conclave is one of the diamond industry’s most prestigious events. It is invitation-only and involves some very heavy firepower. General Colin Powell is the Keynote Speaker this year. Paul Slegers is coming from Antwerp to attend the presentation.

Many of you may not know that John was a teacher in his former career. He developed a love for exploring the intricate nuances of diamond cut quality as a consumer nearly twenty years ago when he was posting on a forum that pre-dated Pricescope. Brian Gavin convinced John to come work for him, and some years later he accepted a position with Paul Slegers, so it is easy to see why he is in such high demand as a speaker and educator in the Jewelry field.

John continues his work in the music world as he can not totally leave his roots. He is the Master of Ceremonies for the Bands of America championships in the fall. If you have kids participating in high school music programs you may know what I am talking about.

I would wish you good luck John, but knowing just a little about the many hours you have spent preparing, I know that luck will have nothing to do with the quality of your educational session.

We skeptics question everything and say, "Prove it." Many people don't like that. Weird.

Will it be recorded and made available online?
Should be really interesting.
Karl aka strmrdr, Diamond Designer

Wow! That's going to be one hell of an event!

A great honor bestowed upon a wise man - sometimes life gets it right! Congratulations John! 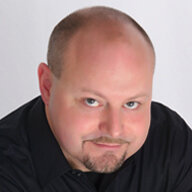 Wink, you're too kind. Thank you for the humbling post my friend.

I truly appreciate the warm wishes and comments in this thread. Thank you! Go-time is 10:00 tomorrow, so I'm fine-tuning things right now. I'll return with more when I'm able. 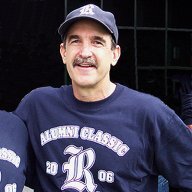 I truly appreciate the warm wishes and comments in this thread. Thank you! Go-time is 10:00 tomorrow, so I'm fine-tuning things right now. I'll return with more when I'm able.

They say that if you have any stage fright you should imagine the audience is naked. All but General Powell that is. Wouldn't be respectful

I have not seen the professional photos yet, but I did get a couple of pictures from the Conclave.

This first one is of General Powell's keynote presentation. I am told it was very well received and started the Conclave off with a splash. 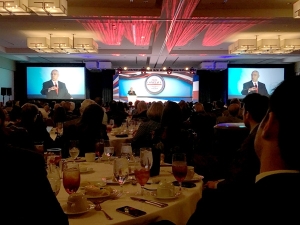 Then I have one photo taken from the front row during John's presentation. I know that he buried himself in preparatory work for at least two weeks to have this presentation ready for prime time. I wish I could have been there to see it live, but I will drag a play by play from him in a short time while we are at the JCK show in Vegas. 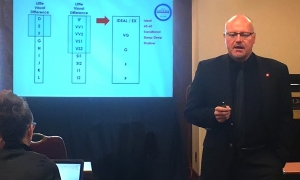 One thing I know for sure, those jewelers who attended got their educational fix for the day!

Thanks again Wink. The lighting was dimmed for the projection, so not good for photos. But the event was first class and went well.


Texas Leaguer said:
They say that if you have any stage fright you should imagine the audience is naked. All but General Powell that is. Wouldn't be respectful

True that Bryan. He commands a room, that's for sure.

The General told a story about driving his Corvette around the D.C. area, perhaps a bit too fast sometimes. Apparently there are so many former-military in D.C. and Virginia law enforcement that he's been pulled over more than once - and when he rolls down his window the approaching officer snaps to attention.

And then he gets a ticket.
John Pollard
Crafted by Infinity US Director 2008-2020

He must be an intimidating man to have in the mandatory Driver's Ed classes after his 2nd or 3rd ticket...

General Powell is such a stand-up guy with such a reputation of impeccable ethics that the cops are probably afraid NOT to give him a ticket.

Congrats on your presentation John. I'm sure it was outstanding.

He must be an intimidating man to have in the mandatory Driver's Ed classes after his 2nd or 3rd ticket...

I'll bet he qualifies for some type of chairmen-of-the-joint-chiefs-discount on his insurance. I mean, if you were his agent and he asked for it how do you say, "No sir, Mr. Powell we don't have any applicable programs for you..."
Brian
B2CJewels
www.B2CJewels.com

KUDOS, John, on the recognition implicit in the invitation to speak at such a prestigious event; your presentation doubtlessly burnished your reputation even higher! But I wish AGS would make the video available for viewing by us mere mortals

MollyMalone|1461209768|4021936 said:
KUDOS, John, on the recognition implicit in the invitation to speak at such a prestigious event; your presentation doubtlessly burnished your reputation even higher! But I wish AGS would make the video available for viewing by us mere mortals
Click to expand...

I count myself as one of those mere mortals Molly! I agree with you, it would be nice to "see the home movie".

Your exclusive online source for Crafted by Infinity Diamonds.
More Fire. More Sparkle. More Life! High Performance Diamonds
You must log in or register to reply here.
Be a part of the community Get 3 HCA Results
Jewelry Blog