hey all, this is my first post but I have been lurking for quite some time. I was in a store above from where my office is for the first time today and saw a very nice looking stone that I am considering as a center for an engagement ring.

Stone is:
Natural Diamond
Teal Blue/green
SI1 but looks good under a loop ( small spot near where prongs would mount)
1.13ct
irradiated

I have always bought colorless or natural yellow''s before so this is a whole new thing for me.

Any thoughts on how to start pricing or what it should go for?

Could use any help/guidance I can get on this one.

Thank you so much for reading!!

I would love to see a picture!

You can get nice quality blue diamonds (irradiated only) on ebay for very little. Here's an example, and she's a pretty good seller. Below is my blue diamond that cost me $30 on ebay, but it's 40 points. 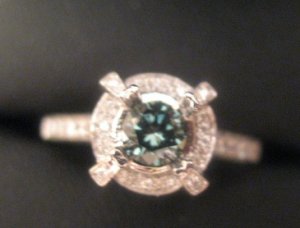 $30 huh? Not sure i have ever seen a natural stone irradiated or not for that much. Any other opinions on the price of the stone? After that one i am not feelin so good about it. From what I have seen on here Prices were from 2500-5k ct?

I am going out to the store now and will try and post a few pics. Anyone else have any help for me on the price? would like to get the ring made ASAP!

thanks again for any and all help!

I hope your lady isn''t a lurker!

If that''s you in your pix & you''re hoping to surprise her, that is ... Don''t know anything about irradiated blues other than I''m hoping you bring back pictures to post! 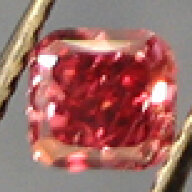 Pictures would be a good start to figure out value, but that will really give us just an idea of what it is. Just like any other gemstone, there are bad, good and fine examples of irradiated diamonds. I don''t like to get into pricing much, as everyone has different business models and margins they need to make. But, I would say that what you were saying you would like to pay is more in line than what you were asked to pay, IMO, and even then there is probably a little room to work. It really depends on how nice the material is, and you are the only one that can say for sure. I would explain to the jeweler that you love the diamond, but that after poking around on the internet you see a huge price discrepancy, and see if he can do better, or at least explain to you why that diamond is much better than what you see on the internet. Give the jeweler the opportunity to explain why and what you are paying for. If they cannot do that, then maybe keep searching. You take a huge gamble if you do not get to see the stone in person before buying, as you would on E-bay. $30.00 is worth the gamble (beautiful ring BTW), maybe even a few hundred, but after that I would want to see it first. Again, IMO you usually get what you pay for. I don''t know if this ramble helps, but congrats on your upcoming engagement...

Here are the pics. I Tried to get good shots... but the camera wasn't behaving

here is another shot 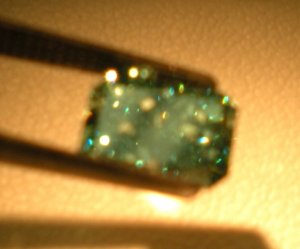 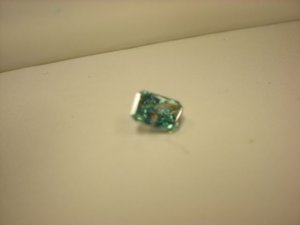 Additional pics posted to above site. Please let me know what you think.

Sure. Sorry about that! 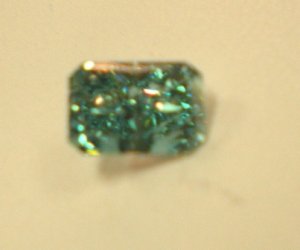 That''s a very pretty color for an irradiated blue diamond - it looks very green/blue. I have to admit that I don''t know the going rate for blue diamonds. All I can tell you is that I see an awful lot of SI quality blue diamonds on ebay for very little. They may be clarity enhanced, not sure. My 40 pointer ebay find was something I wanted because the color looked more like a natural blue diamond to me (dark blue grey). The more teal ones shout "artificial'' to me, but that''s just a personal thing. I know many people love the color.

anyone else have an opinion after i put up the shots?

I''m not going to pretend to know anything about irradiated diamonds. Personally, I''m not a huge fan of them because i think that they look "fake". If this is what you want then I think it looks ok but its hard to tell from the pics cause they are pretty blurry. Honestly, if you want a blue stone I would suggest looking at some natural saphires. This is all my opinion of course. There are some people that really like irradiated blue diamonds. On another note, I think the price seems a little high for the carat weight but that is just a gut feeling with nothing substantial to back it up with. I''m only replying because I have know idea what your girlfriend would want. If my fiance were asking these questions I would hope that someone would say something like I did above. I hope it helps. Good luck.
EM1

I'd say the $4400 price seems on the high side, but not completely unreasonable- clearly, it's no screaming bargain .
There's little relation to natural diamonds when trying to fix a price.
Buying a treated stone for $30? Sounds like a plan! tourmaline_lover - kudos on that amazing find!
But $3500? ( if they accepted that) .......more difficult to say....


The diamond looks to be a pretty color...but I still agree with EM1- the most important thing is how your intended fiance feels about it. Some love them, but the ones who don't generally really don't- although there are exceptions.

Has the subject ever come up with her?
David Friedlander
President- Diamonds by Lauren/Rock Diamond Corp- Serving the Pricescope community for over 15 years- located above 47th St NYC
http://diamondsbylauren.com
212-382-3770

I''m not a fan of the irradiated blues. The deep color tends to kill the fire pretty well, IMHO. I''ve seen a dozens upon dozens in person, and I haven''t seen any I''d willingly wear. Some are a bit sparklier than others, but so many just sit there and don''t sparkle much at all

I think it''s a combo of two things: that the deep color inhibits sparkle, and that they''re typically not well cut. If this one has a decent cut at least, you might get some sparkle and a bit of fire, but not like a white or yellow diamond would have. At least, that''s my opinion.

Also, the color of irradiated blues is completely unnatural. Yellows, not so much- those can look very much like a natural yellow with strong coloration. But no natural diamond is dark bluegreen, and it''s an absolute dead giveway that it''s irradiated. Which, if you don''t care, is fine, of course.

The irradiated blues I''ve seen have sparkled almost exactly the same as a teal bluegreen zircon I own, which has a very very similar color as well. If you like the color that might be a possibility; zircons (not to be confused with a cubic zirconia!) are not terribly expensive I don''t think, and they do have nice dispersion/fire.

My sister just got an irradiated blue diamond for her ten year anniversary. She picked the color because her closet is FULL of it. They went to Alaska to celebrate, and apparently blue diamonds are popular there because they represent the color of the glaciers. She walked into the store and her husband told her "pick one." She got around a 1 carat, I think SI clarity. She is the furthest thing from a pricescoper so of course she knew nothing on the cut quality, but I have to say, the thing is GORGEOUS! It''s in a white diamond cluster-ish setting from Jared and I honestly have to say it sparkles like crazy. She LOVES it, but she is the type of person that doesn''t care at all if it''s treated or natural. It''s pretty so she likes it, pure and simple. I think I would try to figure out if your girlfriend is the same way before buying a treated stone. I would GLADLY take one, but not for an engagement ring. Some people may feel differently of course, I just figured I''d add my two cents about that. As for the cost, I THINK my sister and her husband paid in the ballpark of $4 for hers, but I could be wrong. I tried not to pry too much.

Sorry for the novel. Good luck!

Here''s a 32 pointer in a similar color, a bit lighter, but au-naturel. Unfortunately, it costs as much as a luxury car, but I just wanted to point out that there are natural teal blue/green diamonds out there.

They are super rare though and unless you''re a colored diamond collector, most people would probably think this one is a fake color as well. It''s just "too good to be true."

I think you have some good responses here. Hopefully that will help with your decision. The only person i have seen actually set half moons on an angle that I like is Leon Mege. In his for sale items he has a princess with half moons for sale. I''m not usually a fan of either cut but I think the proportion of this setting is what you are describing in your other thread. Take a look: http://www.artofplatinum.com/4images/details.php?image_id=342