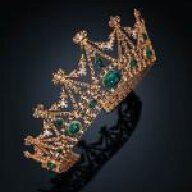 Yum. Yum. Yum. I don't know where you have been all my life!
I am a colored stone lover and have been in heaven living through all these posts.

I have a few questions based on lurking for sometime and would love to have somethings cleared up.
What does a sleepy stone mean?
What does ring by LOGR mean?

And can someone give me a lucid description of a windowed vs non windowed stone with pics?

I'm not an expert, but will try to help:

The LOGR refers to Lord of Gem Rings, which is a company that sells settings on Ebay. You can find reviews on here by searching for their name.

Welcome and glad you found us!

Pictures paint a thousand words so let's see if I can expand on Preg's post above.

Sleepiness can be good and bad. Some people like sleepy gems, others prefer clarity. It's really a matter of opinion. On the negative side, sleepiness can cause a gem to look flat and not perform as much as one with good clarity BUT on the positive side it can make the gem have a velvety appearance and a glow that a clear gem may not have. It really does depend on the stone.

Below is a photo of two of TL's beautiful spinels. The one on the left is sleepy and the one on the right isn't.

In terms of windowing, there are various degrees of "windows". To accurately judge a window you must be looking straight on to a gemstone. The gemstone must not be tilted (otherwise this may cause a "tilt window" which many gems have and is nothing to worry about). When looking straight on, if you can see through the gem and looks to have lost colour in the centre or is paler, this is probably a window.

Below is a photo of two gems with enormous windows!

Then I've attached a photo of one of my gems which is a pink tourmaline. You'll see from the head on photo that there's no window, but if you turn the gem to the side, you can see an area that is paler. This is called a tilt window.