I have an interview tomorrow for basically a dream job to me -- pharma sales rep -- wish me luck! I know most people sort of bomb on their first pharma sales interviews, so I''m really hoping that it goes well. I''ve been preparing for a long time, and hopefully I''ll land another interview!
*~SP~*

Date: 4/1/2007 9:55:45 PM
Author:*~Sweetpea~*
I have an interview tomorrow for basically a dream job to me -- pharma sales rep -- wish me luck! I know most people sort of bomb on their first pharma sales interviews, so I''m really hoping that it goes well. I''ve been preparing for a long time, and hopefully I''ll land another interview!
Click to expand...

Sweet Pea,
Tell yourself you can do it!!! Crossing my fingers! YOU WILL DO GREAT

Best of luck! Let us know how it goes!

Sweetpea, today is the day. I''m wishing you all the luck in the world and hope you get your dream job. Keep us posted.

I'm so excited b/c the interview went really well! The manager even told me so, and said that there is nothing that concerned him at all, and that he felt that I was intelligent and had a great personality and would be great for the job...but, he still had 3 interviews that day so obviously could not promise anything.

I really really really hope that I get this job. A lot of you know that i have been struggling with my current position because I just do not like it a tall and they do not keep me busy enough or challenge me enought. I prepped so much for it and I just need something with more DIRECTION than I have now, and I really don't want to be interviewing and everything anymore...
*~SP~*

Glad it went well, will keep my fingers crossed for you sweetpea. Don''t forget to write that thank you letter!!!

Congrats on the good interview! Keeping my fingers crossed for you

"A thing of beauty is a joy forever." J Keats

I have my fingers crossed for you, SP!

Today is my bday also, so hopefully I''ll get some good news...they said I could possibly hear as early as today...
*~SP~*

Today is my bday also, so hopefully I''ll get some good news...they said I could possibly hear as early as today...
Click to expand...

No news is good news!!! Happy Birthday Sweetpea, hoping you find out some great news today!!!
Piece of cake and a candle *** NG gift***

More good vibes your way - waiting is the hardest part!

ARGH. Still no word...the reason I'm anticipating it so much already is b/c the start date would be the 18th, so I am assuming they'd tell me (if I am hired) by the end of the day today. I'm still keeping my fingers and toes crossed for this job, although I'm thinking that if they were that enthusiastic about me they prob would have already called me. The job search thing is just totally getting me down, I don't want to have to keep sending out my resume and working for a company that I don't like.

Also, had kind of a crappy bday yesterday. Just had a crap day and one of my coworkers said that she thinks they were planning a suprise for my bday (she's uber nosy--and to be honest I was thinking to myself, I hope that they don't b/c I dont want to have to go out to lunch with all them or anything) and then they didnt...which at first I was happy about b/c I didn't want to do anything with them for my bday, but then my feelings felt a little hurt b/c that meant someone decided that they wouldn't and that they thought about it. I have a good working relationship with everyone, but I'm not friends with anyone and we're super busy here this week but it still kinda hurt. I wish she'd never mentioned anything b/c I didn't even wnat them to do anything...I didnt even want them to know it was my bday.

Then I got home, and FI was on the computer, and didn't even say hi. So I went in the other room and he emerged an hour or so later to walk the dog then went back to work. He didn't say happy bday or anything (he gave me his present the night before b/c he couldnt wait -- he got me a really nice digital camera, and he was excited b/c he knew I really wanted one and would not expect it). Went the whole night without him saying happy bday, offering to cook anything or really do anything. He could tell after a few hours that I was upset, and he was like "oh, do you want to go to dinner or something?" Then I got even more upset (I didn't tell him that though) b/c I was thinking to myself, I appreciate the present, but I was really hoping that you'd at least set some time aside to plan something, even something super little like some wine and he and I time, but he didnt. It's just like he gave me the gift, so now he didn't have to think about it for another year.

Plus I was over sensitive b/c of the job thing and the bad day at work and everything. I told him I'm not ungrateful, but I was hoping that he'd have planned some "us" time.

I didn't make a huge deal out of it to him...I mean the camera was expensive, and I didn't want to make him feel bad, I just kind of felt bad b/c he didnt' do anything special for my bday and I always take him to dinner, cook dinner, bake a cake or do something for him on his bday in addition to buying him a gift. Heck, I always pay to take him to dinner at least 3 times a month. I just thought maybe he'd plan something a bit more creative.

Anyways, that's my bad day haha. It's not like he did anything wrong, but I was kind of hoping he'd do something...
*~SP~*

awe, sorry you had a bad day

hang in there SP...sometimes companies can take FOREVER to get back to you even if they say they want to move fast. i have had companies take 2-3 months to bring me on board even though in the interview it was like ''oh, this is a top priority position''. sometimes you just have to wait for what you really want, if you really want it that is!!

Sorry the b-day wasn''t so great. It can take forever to make hiring decisions, so just hang in there!

I''m sorry that your bday wasn''t what you were hoping for, SP. Hang in there -- I hope that they''ll get back to you soon. 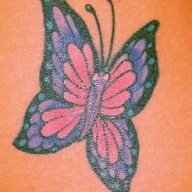 Sorry it didnt turn out the way you wanted though. Your FI needs a bonk on the head. Anyway, goodluck with your job hunt, hopefullly they will get back to you soon.

Thank you everyone for the advice and well wishes!!! I got the job!!!!! I''m starting the 18th, and I gave my notice here at work (the boss actually is letting me leave at teh end of next week rather than staying the extra 2 days for a full 2 weeks -- it''s easier b/c we get paid on the 15th for me to leave then anyways).