How do I help this person

We were driving home last weekend and my husband pointed out to me that there is a tent pitched down an embankment near a stream not far from where we live. I want to do something to help this person out but I'm not sure how to go about it. My thought was bring a meal for Thanksgiving or maybe buy them a blanket. Apart from how to help, I'm also up in the air about how to get it to them. Obviously I don't know who I'm dealing with and need to make sure I don't sacrifice safety.

I've given these before:

I don't give food or cash. We have a panhandling epidemic here and about 82 community kitchens/food pantries. As far as your approach, I never encourage that. You do not know who you're dealing with or what their state of mind is. Everyone is better off going through a filter like a non-profit organization set up to assist the homeless. If this person is in a tent sleeping outside, chances are they know the appropriate channels through which to receive help already and will likely go to a place tomorrow for a meal if your community has such places (or churches that provide that service.) You are a kind person to want to help. I hope you and your family have a happy Thanksgiving.

How far are they from the road?
I give money, food, coats, blankets, care packages, etc.
If I were you, I'd put together some care packages in large zip lock bags. Basic necessities like toothpaste, toothbrush, etc. in one. Maybe hand warmers (like these: https://www.amazon.com/HotHands-Hand-Warmers-40-pairs/dp/B0007ZF4OA/ref=lp_14329821_1_1?s=outdoor-recreation&ie=UTF8&qid=1479943235&sr=1-1), gloves, socks, etc. in another. I'd buy a blanket too.
As far as how to approach, I probably wouldn't. I would leave the items near the site (close enough that they will see them, but far enough away that you don't compromise your safety).
Or you could contact a local homeless shelter, social services, etc. and ask for advice about how to help.

Monarch, Happy Thanksgiving to you and yours! Yeah I did consider that I need a middle man here I just wasn't sure if maybe I was being too cautious. I guess there really is no such thing. I don't give money but I will buy food if I see someone who needs a hand.

Momhappy, the tent is not super close to the street so I don't think I could put supplies in a bag and leave them on a curb because they would never find them. I'm kind of debating getting another organization or social services involved because they may tell this person the tent has to go. So I'm not really sure if I can help this situation any. I might just have to double up on the next good deed
Happy Thanksgiving to you and your family!
They’re real and they’re spectacular!

Is your husband on board?

If so, and he feel comfortable doing it, I'd have go ask the person what they need.

In Oakland there are tent villages. It does something to my soul. What I have noticed things they like is outdoor furniture like comfortable folding chairs and lanterns. And outdoor gear like coats, jackets, socks and things that are waterproof and warm.

If you want, you can go to REI or another camping specialist and see what they recommend.

Food is always appreciated of course, but can be difficult to store. Do they have a car? If they have a car, I would do gas gift cards.
"Experience is inevitable in life; learning from it isn't."

The husband is on board! I think that was part of the reason he pointed it out to me, as if to say "hey maybe we can help". I don't know if he would be willing to try to get to the tent because he is a big guy and this is on a steep incline. They probably had to trespass on commercial property to get down there.

I didn't think of camping type supplies, initially I thought food but then the storage is a good point. It is cold here at night so my first thought was blanket but a sleeping bag would probably be more appropriate. Unfortunately we have a large population of folks in our town with mental health issues although in twelve years I have never seen anyone resort to a tent. I am doubting they have a car, maybe a bike? From where the tent is they can easily walk downtown and there is a YMCA as well as several homeless shelters. I don't know, I'm kind of at a loss but maybe I will drive by and try to scope out the surroundings more to see what we can do.
They’re real and they’re spectacular!

I totally believe you have good intentions and are a good person ... but this person may not want help.
He may even resent it, and find it demeaning if approached by you or by anyone or any organization.

I said, may.
I don't know.
Nobody does, except him.
Some people have lost everything ... except their pride.

Personally, I'd leave him alone and make a contribution to a local charity with a mission to help the homeless.
Of course this individual may or may not benefit, but still, I'd leave it at that.
Also I would not give the charity any identifying information about this man, location, physical description, etc.
" - unless I am myself, I am nobody." - Virginia Woolf 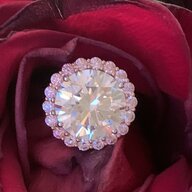 I would just ask.. "Hello there. I noticed the tent. Just wondered if you were living here and perhaps needed some help? We all know how that feels, so I was thinking that perhaps I could give you a blablabla". But then again I don't live in a place where that could be dangerous, so don't listen to me. I go up to drug addicts that sit on the street, pet their dogs (kind of the reason I go up to them I guess) tell them that it is a beautiful dog and that they are doing good for being able to take good care of the dog. This one guy, his dog is always in his lap, well fed and well groomed, so happy its almost "puuuurrr'ing". He told me that he was so happy that he had been allowed to adopt this dog from a shelter. He had been visiting it for ages, but he did not have a place to live, so he could not adopt it. Now the city had helped him find a flat and so he had been allowed to adopt the dog, because the dog loves him (clearly!). This dog is deaf from trauma in the past, so he could have been really scared of so many people passing them each day. But he was not. They had taken it step by step, he told me, giving the dog a lot of time to adjust. But there you go. People can be good at one thing and not at another. At least this dog gives him a reason to stay off the worst drugs (and the city is keeping an eye on them and so is the dog shelter, off course). But I'm not giving him money. Dogfood yes. Showed him how to teach the dog to drink from a water bottle, yes. Money, no. Food, yes. In general, I also give away coffee cards with free coffee at the nearby coffee places during winter. But then again. We are sheltered here, these people are normally not dangerous.

Hey Kenny, you make some valid points. I think I would feel better sticking my neck out and asking if help is needed and risk getting told to get lost BUT you are right that this person may just want to do his/her own thing and not be bothered.

Scandinavian, thanks for sharing that story about the guy and the dog he adopted, how wonderful for both of them that they found each other. I agree about no money, I'm not even sure how long the tent will be there because the city may catch wind of it soon. We will see, I'll keep you guys posted on what if anything happens.
They’re real and they’re spectacular!

I totally get what you're trying to do out of the goodness of your heart. but don't call it "help". Some people live that way voluntarily. Some do it out of sheer pride and may not appreciate your "help". Some cases its mental illness. you just never know.

Go with your gut. Engage but don't call it "help", and make conversation. You can assess by their answers and how they respond if they're in a pickle or not, then take it from there.

I want to also say please take care of yourself when you approach and make sure you're protected at all times.
Instead of telling people to "have a nice day", sometimes I tell them "have the day you deserve", and let Karma sort that mess out....
You must log in or register to reply here.
Share:
Facebook Twitter Reddit Pinterest Share Link
Be a part of the community It's free, join today!
JEWELRY BLOG