Hi everyone - so today I received my wax pictures of a three-stone ring I''m having made by WF, and I was really hoping I could get some input from you all. My major concern about the wax pics is that I had said I wanted a delicate, rounded knife-edge-style band on the ring (a la Tiffany, after whose designs the ring is roughly modeled), but it looks to be chunky and flat in the pictures. I also requested a comfort-fit interior if possible on the ring - is this something that is only added after the ring is cast?

I also expressed concern about where the side stones would sit in relation to the center stone - I can''t tell where this will be very easily from the wax, and so I asked if they could drop the diamonds in and send me a picture of that so I can tell for sure if its where I want. Was that unreasonable?

I said that I assumed the center diamond''s prongs wouldn''t look so chunky in the final metal version (I know people often say the wax looks more chunky than the real version). But I wanted to sure - can anyone confirm this?

Finally, I asked whether all the prongs, or just the center diamond''s ones would be claw prongs. I requested delicate single-claw prongs but didn''t specify if that would be just on the center diamond or the side stones as well. Has anyone had any experiences with this and can you tell me are the prongs usually all the same type on a three-stone, or will they be regular on the side stones and claw on the center? In your opinion, what looks better?

Whew, OK, that got really long, I guess I''m just trying to make sure this is absolutely perfect. Any other input is welcomed. I''ve posted the pictures of the wax below; center stone will be a 1.12 ct that I have from my original e-ring which broke, and side stones will be .25 ct each ACA''s. Thanks in advance for your opinions!

okay, having just gone through the custom process, i can tell you that the wax really is just a ''general idea''
i did some freaking out my own self when i saw my wax, even though i know good and well that it wasn''t what the final piece would look like. it''s hard when it''s your own baby but trust me, once the piece is cast and they put the final finishings on it, all will be well. there is A LOT of detail work that is done after casting. they really do know what they are doing!

here''s a pic of my wax (that thing looks like a cog from the top view!)
and the final piece (not anything like a cog 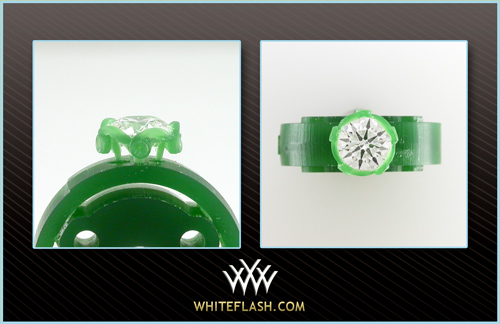 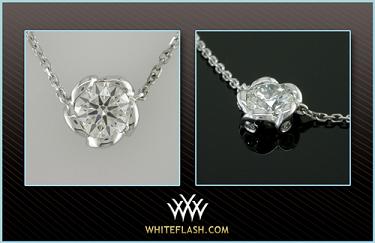 Thanks Belle for the reassurance. Your pendant certainly is stunning!

I actually just got a call from them, and they reassured me that the band won''t look like that at all - they will be making it the rounded knife-edge as I requested. They said it will be a bit under 3mm - I''m still worried that may be too thick but I think they are going to send me more pics, so we''ll see what they look like.

Unfortunately they can''t set the diamonds into the wax because apparently its too delicate, so that will just have to be a leap of faith for me as you said. But I think it looks like that will be OK - they certainly sounded like they knew exactly what I wanted on the phone, but I can''t help still being anxious (who me, type A? Nah...)