Help me identify this dress

The short story: I bought this Kenneth Pool dress today, and want to know if anyone can help me find the style number or name, or what season it''s from.

The ling story: So I was shopping for a formal dress to wear on an upcoming cruise, when I decided to stop at a local bridal store that has this amazing clearence room where I got a dress a few years back. After having no luck with the formals, I walked through the wedding gowns just to take a peak (I''ve been married 5 years, so I don''t need one, I just like to look). I saw a beautiful gown that didn''t look like it fit with their other gowns. It was all silk, and looked like a top end designer. I know this place doesn''t carry the expensive gowns, so I was really surprized to see something like that there. I left the store empty handed, but couldn''t get that dress off my mind. I looked the designer up online, and found out I was right. I went back today and bought the dress, which by some strange twist of fate fits me perfectly. I think the story is that someone bought it at Saks, brought it to the bridal store for alterations, and it got a tiny stain on the front of it during the alterations. They were unable to remove the stain, and had to get the girl a new dress. Then they just dumped this one into the clearence room. The stain could actually be hidden in one of the pleats, so it isn''t even that big of a problem. It has a Saks Fifth Avenue tag, and Kenneth Pool for Amsale tag. There are some issues, it looks like they were removing the embelishments from the end of the train, and the thread holes might not come out. My co-worker who sews alot thinks it would be easy to shorten the train and remove all that though. My co-wroker''s daughter might be interested in it, or I thought I could sell it on ebay or somewhere else online. For the price I paid ($75, that''s right, less than a hundred bucks!), I couldn''t just let it sit there all loney in the bridal store! The tag has what looks to be the number "679" and the word "Indy" written on it. I thought this might be the name or style number of it. Anyone seen this style before, or could you point me in the direction of where I could find it? I didn''t see anything like it on the designer''s website.

Back view with the double bustle that was already finished:

I just found this one that has the exact same lines, but completely different beading.
http://www.bridecouture.com/catalogbrowser.aspx

is that the "smiley face" dress?

It kind of reminds me of the one that a link to a consumer advocacy news bit about it was floating around recently. I may be totally wrong about that. I''ll see if I can find it.

Anyhow, whatever it is- it''s a great buy. That dress is divine!

Nope. Not the smiley face dress

I found a model pic of it, but still can''t find a style # 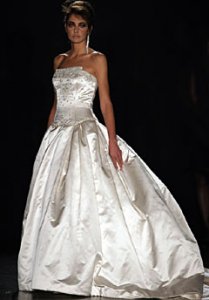 Here it is bigger: 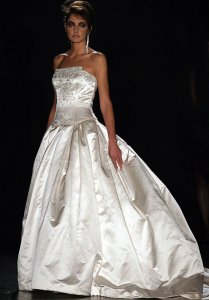 Thanks! That is it! Are there any pictures of the train? I would love to see what it looked like before the butchered it removing the beading.

did you try a search on the knot? sometimes they have a bio dedicated to a specific designer which showcases all of their dresses. maybe there''s one for kenneth pool?

that''s one amazing dress and a heck of a deal!

Sorry, no back pic. If I were you, I''d contact KP or a store that carries KP and ask them what that dress is called/style#/etc. I''m sure they can find out for you...

(Sorry for the long link...found it through Google Images)