Help Me Choose Between 2 Diamonds

I linked two videos but I won’t say which which diamond is which. I’m curious if y’all can tell. One of the stones is a 2.00 Carat D/VS2 EX/EX with Faint Fluorescence. The other stone is a 2.05 F/VVS2 EX/EX with Medium Fluorescence. They are within $1K of eachother in terms of price and have nearly identical proportions.

Let me know which video you think correlates to which stone and which you’d choose, I’m curious!

It seems no one wants to play a game like that.
The professional video is the VS2.
I would not consider buying a diamond with so little information and i am not sure what you want us to say with two vastly different quality videos?
Garry Holloway BSc FGAA DipDT
Sparkliologist, Jeweller, HCA and Ideal-Scope Inventor
HollowayDiamonds.com.au Ideal-Scope.com HollowayCutAdviser.com
1

You’re right, apparently no one is interested! As a first time diamond buyer, I was just curious if the experts in this forum could see anything solely from the videos. I did end up making a purchase though.

The VVS2 still intrigues me so the plan is to take my new VS2 stone up to New York when I have it and compare in person to the VVS2 and anything else that seems comparable at the time. My new VS2 faces up larger then the VVS2, has better color and fluorescence, but I am mostly concerned with fire and brilliance. Ultimately VS2 vs VVS2 doesn’t matter much to me, but if that VVS2 or any other stone for a similar price far out sparkles my acquisition + has a few basis points over 2cts for added recut security, it might be worth my extra $1700.
1

Btw - here are the GIAs 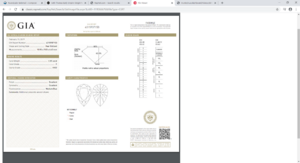 Pear LxW varies widely at any given carat weight so there is no info to be gained there. The videos are filmed under such different conditions there
is no way to tell any color difference even if we could tell one shade off which is highly unlikely on a computer screen. The only thing to go by is the
inclusions at the pointed end of the VS2. (we're people, not computers)

The good news (in my opinion), is that both these stones look to have pretty nice faceting pattern which is the key to good light return. As you rock
the stone back and forth (north to south), you want nice facets to light up headed down toward the pointed end. Good luck...I think you've made two good
choices.
~~~Thanks to PS, my wants far exceed my budget!~~~
1

My 2.00 D/VS2 arrived yesterday and I am absolutely thrilled with the fire, brilliance, and shape. It faces up closer to a 2.1 and the bowtie seems almost non-existent absent of playing with the angles to try and find it.

My biggest concern with it is that it is a 2.00 so if anything happens, the recut will take it below 2ct. Luckily, I got it at a price per carat much closer to that of a <2ct anyway. 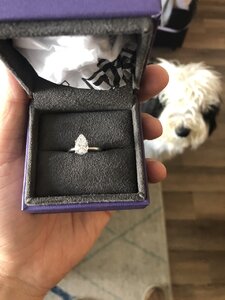 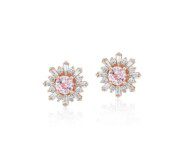 Get The Look: The Marvelous Mrs. Maisel 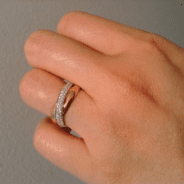 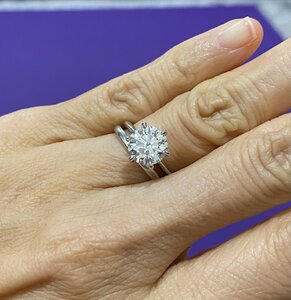