Does anyone know the difference between a Hearts on Fire Dream diamond and a Princess cut diamond? I''ve heard these are only excellent cuts, but a lot more money? Any information or comments would help. Thanks

Hi Jeff. A picture of the HOF Dream is attached. It is a square, cut-cornered, brilliant cut stone with a pavilion that is not cut as deep as a princess, and a crown that is higher with greater crown angles than a princess. In addition, the symmetry is precise, giving the dream a "hearts" pattern under the hearts & arrows viewer. 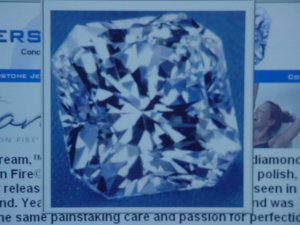 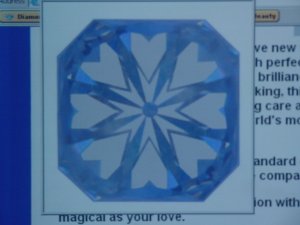 Does anyone know the difference between a Hearts on Fire Dream diamond and a Princess cut diamond? I've heard these are only excellent cuts, but a lot more money? Any information or comments would help. Thanks

One of your primary differences is the Dream is a cut cornered square while a princess has pointed corners. When I saw Dreams for the first time I have to say I wanted to carry the HOF line JUST SO I CAN FEATURE DREAMS. There is a very hefty price tag attached to them though but currently there aren't any cut cornered squares that can compare to them (at least the ones I've seen). There is only one other modified square brilliant (with pointed corners) that IMO surpasses the Dream and that is the Regent. The Regent not only has the Hearts symmetry pattern but also has the Arrows as well and since a diamond is always mounted in the face up position one realizes the importance of the face up view. And when you consider the price differences ...

Last year Regents were primarily featured in sizes under 1ct. This year however we've purchased a few incredibly beautiful Regents over 1ct which for the most part have been sold (except 2 newbies on our site)but many more are coming and we're excited about this.

An interesting comment from one couple who came in from Virginia this weekend is that they had ruled out Regents because of the pictures they saw online, they thought the Regent was too "roundish". Once they saw them in person I believe it became their #1 pic for square modified brilliants and that was after viewing them next to a radiant, a Lucere and a princess.

The most similar cut cornered square there is to the Dream (not pointed corners) is the Flanders.

Hope that helps and Rich's post is great with the pics. Good job my friend.

In practical terms, a Dream diamond (and a Regent and a Flanders) looks more like a round diamond in terms of the way it "sparkles" while a princess has more triangular facets. Although I've never seen it measured, I suspect the princess has poorer overall light performance. However, the look of a princess is quite different so it will be important to compare them side by side. Your local HoF jeweler will no doubt also carry princesses so you should be able to see how different they are.

When we viewed the Dream diamonds--they had a few set into 4 prong settings and they almost looked rounded! It was hard to tell at a quick glance they were not a round stone (from the way they sparkled and also their overall shape when covered by the prongs). They were very beautiful and sparkled TREMENDOUSLY!