It is my pleasure to let you know that the weekend was somewhat stressful (for me) but with a great outcome.

Sunday morning the lucky Mr. FC got up at 6.30am and started to pace the floor in eager anticipation of the coming hours - after several cups of coffee (which definitely did not help) and picking flowers from the garden to complement the upcoming event (apart from the champagne purchased last week) the hour of decision had arrived.

The now extremely nervous Mr. FC (it is now 8am) checked in to see if ''the sleeping beauty'' was awake (which would not be good) before deciding to pace again with a Pepsi twist and half a cigar to calm the nerves..... again in retrospect not the best idea, but it seemed good at the time !

Finally at 9am the now "less certain than ever that this was a good idea - but it''s too late to turn around and it all doesn''t matter if she says NO except my life will be crushed forever" Mr. FC finally mustered the last strains of resolve to ask the freshly awoken Ms. V to become his wife by kneeling next to the bed and mumbling some words about Sunday''s would never be the same again and here is a coffee and other fine, well practised sentences.

But finally the question came "I want you to be my wife ?" (was that actually a question ?) and was met by a resounding "YES" and a ring was produced. This ring had been forged secretly in the US several months before, but remarkably fit exactly - some call it luck - I would agree
with that !! (a pic attached).

The day was then swiftly followed by phone calls around the World and normal important things (such as drinking champagne before lunch on a Sunday... hmmm) and finished off with a nice BBQ at Ms. V''s house with a few friends Sunday evening !!

All in all this was certainly a day to remember - the date has not been set yet, but will be around this time next year !!!


I want to thank everyone here at PScope for all the help - this rock sparkles like crazy and the setting is just sooo spectacular !!!

Rockdoc, Denise (Whiteflash), Duane (ADOL), Leonid, Cut Nut, Mara, pcq and my local ''setter'' here in Bermuda - you were all in my thoughts yesterday - really made the day extra extra special !!!

Thanks to everyone here at PScope - pictures to follow !

A fairy tale from a the happiest guy in the World!
FC 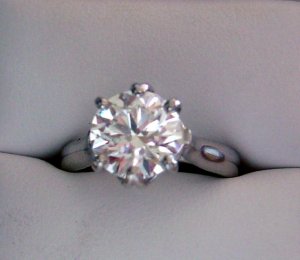 PS - specs are a round HVS2 GIA AGA 1A cut with med flour low set in a Plat Vatche Royal Crown !

FC--CONGRATULATIONS! You did a wonderful job on the ring! Best of luck to you and the lucky girl!
-Anna Magdalena

don't forget to send invitations to everyone on the forum.

AWWWWWWWWWWWWW what a sweet story
The kind we love to hear
You guys are sooooooo romantic...
Can't help but wanna cheer!

That is sooooooo GREAT, FC!!! And the pic was wonderful too!!!

Many CONGRATS to you and your intended and best wishes for many happy, healthy years to come!

Ooooh what a pretty picture and lovely story. I am sure your nerves were much more calm after the champagne and the YES.

Post more pictures!! I want to see that monster of a stone from every angle!

I'll slap you for being so cute with this story.

That all made sense to people who know me. Congrats! I love when a man is this giddy about love.
Lanee []