I found this written by Bob Berman in one of the books I am reading. I never thought of it this way
........."Colors are simply waves of different lengths and the perception of color comes from the mixture of red, blue, and green. Those are lights primary colors. The true colors They are totally different from the primary colors of paint.

The bright light architecture has plenty of quirks. We see yellow only when we receive an equal dose of green and red light. You would think seeing red and green light would give us the sensation of “greenish-red but no such color exist. Yellow is our “greenish-red” even if it bears no resemblance to either hue.

This contrast with our subjective experiences of sunlight’s other primary colors. We do indeed percieve reddish-blue as purple and greenish-blue as aqua or cyan. Yet thanks to our eye-brain wiring system, we cannot gain the subjective experience of a reddish-green or a yellow-blue, nor even imagine it."
Bob Berman
These gems have life in them: their colors speak, say what words fail of. ~George Eliot 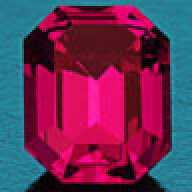 Those are lights primary colors. This comment needs more explanation. With the exception of the very narrow dark Fraunhofer lines

the spectrum of light from the sun is continuous. In other words, there are no packets of red, green, or blue light with considerable spaces in between, devoid of intermediate wavelengths.

They are totally different from the primary colors of paint. See subtractive colors

We see yellow only when we receive an equal dose of green and red light. You would think seeing red and green light would give us the sensation of “greenish-red but no such color exist. Yellow is our “greenish-red” even if it bears no resemblance to either hue.
Let’s not get confused with the wavelengths falling on our eye and our perception of its color.

I’ll explain why after I introduce two tools of physics: A monochromator is an instrument capable of generating variable color in very narrow wavelengths.

The other is a spectrophotometer, which is an instrument that can measure light in very narrow bands of 1 or 2 nanometers.

It is possible tune a monochromator to yellow light at 574 nm. It is yellow, it is not green and it is not red.

It is possible tune two monochromators, one to green at 555nm, and the other to orange, at 610nm. If you point these two beams at the same point and adjust their relative intensities, your eye can not tell this blend of green and orange light from the single beam at 574nm. Your eye and brain interprets both spots as the same identical yellow color, yet the spectrophotometer can easily tell them apart.

If this example seems far fetched, it is possible for one garnet to transmit yellow, and yet another color change garnet to transmit in green and orange, yet block yellow, due to an absorption band in the yellow region, caused by trace chromium and vanadium inpurities.

I think the most interesting section of this reference, is the eye systems of non-human animals. Bumblebees see ultraviolet light, reptiles and amphibians also have four cone types (occasionally five), and mantis shrimp with up to 12 different spectral receptor types thought to work as multiple dichromatic units!
Mr. zeolite, physicist, gemologist (GIA)

Thanks for adding on to it Zeo. It's much more indepth as you can understand but I only copied out one paragraph out of a whole chapter. Good to hear you fill in some of the blanks. Thanks brother man

I should have added...this was taken from Bob Bermans book on Sun and Sunlight(spectrum, waves, particles, etc.). He was a writer for Discover magamzine for 17 years, Editor and chief of Astronomy magazine, and the current Astronomy editor for the Old Farmers Almanac.
These gems have life in them: their colors speak, say what words fail of. ~George Eliot

Very neat. I love learning stuff like this on PS.

"In the world of gemstones there are two examples of mixing red and green to make yellow that are quite exciting.

Alexandrite's color change is enhanced because the mixing of it's two colors, as you would see under mixed light conditions, is yellow. Yellow mixed into and dominated by red or green does not produce the continuous color mixture that we perceive when, for example, you would have a color changer from blue to green. I have tourmaline, that I believe to be cuprian, that has a strong shift from blue to green, but much of the time it is blue green because it is difficult to get "pure" white light that isn't mixed in modern homes. I morn the departure of incandescent lights because they can bring out fantastic colors in some tourmaline. Paraiba tourmaline definitely fires up under incandescent.

The other pink/green mixture that I like is in tourmaline. Nigeria has produce quite a bit of this lately. You think you have a tri-color with pink, green and yellow in pastel tones, but you really have only pink and green. As the stone is turned you get to see color change caused by different mixtures of pink and green. It is pretty neat.

Finally like all spectral colors, violet, blue, green, yellow, orange and red, yellow has it's own own set of wavelengths and does not have to come from mixing green and red. It is certainly true that mixing the primary colors, both the set of additive and subtractive, can produce all the colors we can perceive."


Bruce
These gems have life in them: their colors speak, say what words fail of. ~George Eliot