Giant Panda Surprises Zookeepers With Twin Cubs, While Scans Only Showed One Cub

http://www.boredpanda.com/giant-panda-twins-birth-yang-yang-schonbrunn-zoo/
Last Friday, August 12th, the zookeepers of Schönbrunn Zoo in Vienna, Austria were left in awe when they found out a giant panda, who was supposed to give birth to one little cub, had given birth to two…and they’re twins!
Panda Yang Yang gave birth to the twins last Sunday, August 7th. The reason the zookeepers thought she gave birth to one cub was because of what the scans showed – one cub instead of two (apparently, baby pandas are extremely small, about the size of an average person’s hand). But when the keepers heard squeaks of not one, but two baby pandas, they got suspicious. And those suspicions were confirmed last Friday when Yang Yang was caught on camera cradling two baby cubs. Awwwww. 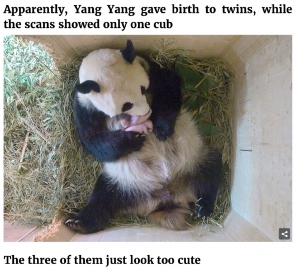 Adorable! Thank you Rockinruby for always sharing these cute animal pics. I like what you post - brightens my day!!!

Awwww, thank you so much for your kind words! Reading your post definitely brightened my day!

Awwwww, so sweet! I love pandas, they are adorable and make me smile. Thanks for posting!

What a sweet picture! Thanks!
"If money can fix it, it's not a problem." ~ Tom Magliozzi of "Car Talk"

Awwww. What a precious photo.

Thank you Rockinruby.
“Until one has loved an animal, a part of one's soul remains unawakened.”
― Anatole France

I hope they live. Newborn pandas' lives are so fragile at the best of times; if they are like humans, being twins may put them at more risk. Does anyone know if being twins means that they have lower birth weights?

How sweet is that?