I have read info on both.

Is the statement true that GIA is more widely recognized and has greater standards than AGSL?

Why does Blue Nile Signature Collections only have grading reports from AGSL. GIA are used for the others diamonds (primarily non Signature Series)? Should one be concerned?

Could someone please provide their insight or opinion in regards to this.

In the USA, the GIA and AGSL are siblings in a world where most of the rest of the labs are distant cousins.

Some people prefer AGS because they give a little more cut info and they use the magic word "IDEAL" in their grading scheme. 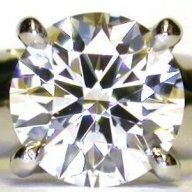 I have heard from three vendors that AGSL is stricter than GIA in grading clarities, so there's a higher chance that SI diamonds will be eye-clean. From what I have seen so far, this is reasonably accurate. You can browse the reports on the web to see for yourself.

The other issue is that AGSL has an ideal grade for symmetry and polish in addition to EX and VG. I have not seen specifics on how there two scales are related though. In addition, the grading is done by humans and is prone to errors.

This means that an AGSL ideal does not necessarily have better symmetry than a GIA EX. If you are looking for a H&A diamond, the scale discrepancy is probably inconsequential. Polish is supposedly not a factor is better than VG (on which scale though?).

It also shows why a good appraiser is so useful in protecting consumers.

I hope an expert will chime in with more specific information to clarify this.

The GIA and the AGS were both started by Robert Shipley in the 1950's... The GIA was started to provide the industry with a standard for grading practices and to provide education to industry professionals and the AGS was started to maintain a sense of ethics... Since we're breaking this down, we'd like to unlock the abbreviations for those who aren't familiar with them:

Eventually the GIA opened a gemological laboratory which is known as the GIA Gem Trade Laboratory (GIA-GTL) of which Peter Yantzer was the former laboratory director in Southern California. There was a disagreement between Peter Yantzer and the GIA Board of Directors regarding whether disclosure of the Crown and Pavilion measurements should be made on the diamond grading reports... Peter lost the arguement and was lured away to the AGS where he opened the American Gem Society Laboratory (AGSL). As you might imagine, Peter took about half of his grading staff with him when he left... Hindsight is always 20/20 and it seems to us that the board of directors at the GIA might have agreed to let Peter disclose the crown and pavilion angle measurements on their lab reports if they had realized how much credibility and money they would lose to the AGSL in the years to come, but now they seem to be scrambling to regain their control of the market by issuing half-baked "reports" regarding the effect of proportions on diamonds...

In terms of accuracy, we consider the AGSL and the GIA to be on the same level. However in terms of disclosure, the AGSL is second to none... While the GIA may be more recognized by the diamond buying public because their laboratory has beein issuing paper for a longer period of time, the AGSL is more recognized within the industry as the place to send ideal cut diamonds because the proportions will be verified and disclosed on the lab report. Regardless of which laboratory graded the diamond you are considering, you should still insist on a full version of the Sarin / OGI computerized proportions analysis so that you know the high and low points that the average measurements for the crown and pavilion angles are based upon because even that is not disclosed on the AGS Diamond Quality Document (DQD) and it is information that is quite important.
Todd L. Gray, President
NiceIce.com

8 PM Bill D. wrote:
I have heard from three vendors that AGSL is stricter than GIA in grading clarities, so there's a higher chance that SI diamonds will be eye-clean.
----------------

Thank you for all of the information and opinions from those that responded.

It seemed apparent to me that more diamonds were graded by GIA and that this name stood out above the rest. I did notice the reports were more detailed with AGSL and appreciated that.

I feel much more comfortable knowing that an AGSL is not only as good as GIA but in some ways more informative. The background of the two organizations was quite helpful as well.

Thank you for taking the time to help out a novice.