I wasn''t sure where to post this so I tried here and the liw forum. Basically, my husband/fi and I eloped 2 years ago, and never told anyone. Now we''re doing it for real. When we told everyone that we were engaged, the first thing my sil said was "I''ve got to be at your stag!". ummmm...??? Even Fi thought it was weird. I''m not sure if he told her, but he made it clear to me and his best man that he would think it was "really inappropriate" and that he didn''t want her invited. About a month later she tried to plan him another stag herself. She invited his friends (as well as a bunch of hers). Fi told her he was uncomfortable with the whole strip club thing, so she changed it to be just a party. It basically turned into an engagement party, but since it was still his stag, I wasn''t invited. He finally just sat her down and told her to cancel it. I don''t know why, but I''m still so upset about the whole thing.

Can you clarify what exactly is still bugging you? Is it that your fsil was excluding you? Or is it that she was inappropriately trying to intrude on your FI/DH''s plans?

If its the first, then I think that''s legitimate, but it sounds like your DH is already aware of the issue and is totally willing to stand up for you.

If its the second, it sounds like he has already told her it makes him uncomfortable.

I get why her behavior would be irksome, but I honestly don''t think its worth holding on to unless she is continuing to act inappropriately. Is there more to the situation? Does she do other things that overstep boundaries?
C

I get why you are somewhat upset - your SIL wanting to go to your FI's (actually husband's) stag party is weird, and not inviting you to an engagement party thrown in your honor (since presumably you are half of the engaged couple) is out-and-out rude, though since it sprang from an attempted stag party it makes some twisted sense.

But... as for what to do with this information? Little. File it away, try to maintain an appropriate distance from her in the future (not cold and distant but not chummy-chummy), and beware that she has some odd ideas of social norms and possibly an inappropriate attachment to your DH. Nothing really to do at this point, as clearly your FI/DH has your back. Which is definitely the most important part. 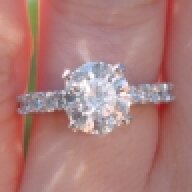 skeeee-I have some problems with my fsil as well. Nothing that is like yours, but I can relate. I think that as long as your FI/DH told her he was uncomfortable with it, then I would let it go. When he is in agreement with you and lets it be known, it makes things easier. I would be upset to, but keep it inside since the problem was already taken care of.

It could be worse-she could be like my FSIL who doesn''t know the meaning of boundaries, she lets herself into FI''s house even when we are not home, and a few Sundays ago she showed up at 11:30AM unannouncned on her way to HER OWN HOUSE, the wash her hair-no joke, I still want to half-strangle her.

I know that it should all be over. My Fi stood up to her and told her it made him uncomfortable, and for that I am grateful. That''s why I need advice. I don''t know how to let my feelings go. I still almost hate her. She crosses lines like that all the time, but I''m trying to get along with her. Geez Blair138, I swear our in laws are related!

Seriously, I feel so much for you. I try to see the good in FSIL and TRY SO HARD to be nice to her, and then she will go and do something weird, like come over unannounced and make herself a grilled cheese and leave cheese and pans all over the kitchen... and I will get upset all over again. I HOPE and PRAY that she changes when I move in.

I would say just distance yourself from her as much as you can. If you really think you cannot get over it, I would sit down with her in a non-threatening way and discuss with her the way she makes you feel. Put it in perspective of you doing that to her and how would she feel? I actually might have to do this with FSIL if she doesn''t start respecting boundaries. I think this should be a last resort though especially if she doesn''t do anything else.

Blair, This might sound totally terrible, but you should keep a racy soundtrack on in your bedroom or something so your SIL will hear it and quickly excuse herself from the premises...

wow blair, I totally know how you feel. I''m lucky because it''s a little more under-control now but when I met fi, and even up until 8 months after we eloped, she and fi actually lived together. The moved in together like 5 or 6 years before I met him. When he finally told her that she definitely had to leave NOW, because I was moving in, she STILL dragged her feet for a few months because "she couldn''t find a place" (her dad still pays her rent, so money wasn''t really an issue). We all ended up living together for awhile. When she did move out, she moved like 3 blocks away. She also has all these little "emergencies" that even drive fi crazy. She called us at midnight crying because she thought her cat might be sick. She spent her rent check on jeans. She took a vacation to Europe and spent all her money (including the rent $ from her dad). She emailed us, and her other brother, telling us that we needed to go put money in her bank account so her rent check didn''t bounce. Did I mention that she''s 30? AHHHH..... lol I think I''ve been needing to vent for awhile. She''s really not a bad person, and I don''t really hate her. She can just be soooo darn immature sometimes, and it drives me crazy. She''s also never even had a boyfriend before, so I really don''t think she understands the boundaries that she''s crossing. She decided that she and fi HAD to go for dinner once a week, and when she moved out she made him promise. If he misses a week, she calls and calls and make him feel guilty. At least he''s been pretty firm with her, and her behavior has gotten better.

OMG that''s pretty intense for 30!
sounds like the stag party idea was just a straw (on the camel''s back, not the wholeload...)
And then a plank in reason broke... Emily Dickinson
K

The other posting is here- https://www.pricescope.com/community/threads/fsil-problems.113333/

Yeah, I know it''s great that fi is standing up for me and keeping her in line... I think I just needed to vent. like someone on the other post said, this is kinda just the last straw with her.
K

sorry! I meant to post the above on the LIW side....

oh my gosh skeeee I think we might be marrying the same man! FI''s sister used to live with him too. She gave him a measly amount of money a month and then would break his things, not put them back and not buy her share of food. Except my FI''s response was "well she had a nice down payment for her house"

ummm ok, but she basically mooched for 5 years! and she still mooches! I am all for treating your siblings to stuff now and then, but she doesn''t pay him back or reciprocate! At least when I buy stuff for my bro and sis, they treat me back or pay me back.

The best part is, his sister is self sufficient and has been since she was 20. she has tons of money, but she still mooches. I''m really sorry skeeee, we can commiserate together though!

Sorry to hear about your fsil (or is it sil since you are already married?) problems. I hope she takes the hint and backs off. Can I ask why you eloped without telling anyone? Just curious