Freke: What''s this about an upgrade.... 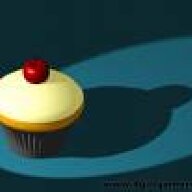 I wanna know about your reset...SPILL IT
“Friends are like cupcakes in my pantry of memories.”
- Anonymous 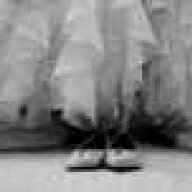 What?! How did I miss this? Thanks for posting, Sugarjo! Man, I've missed so many things over the last month 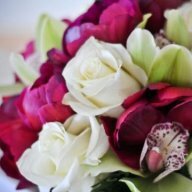 Yes, you''re being elusive about this. You''ve vaguely mentioned it in a few threads, but we want details.

Hey sugarjo...have you gotten your KSs yet? We need pics!

Reset:
This is taken from page 5 of my SMTR thread:
Linky-dink

"I talked to FI about it, and he's fine with a reset. I had originally designed a ring (not very well I might add, but you can get the general idea) with elements that he and I both liked. They (FI and BFF) went to the store and showed them my design three weeks before he was going to propose. So obviously, being right before Christmas on top of a custom job, they couldn't get it ready in time. FI wanted to stick with the custom, but between the looming deadline and BFF pressuring him, they chose this setting.

I went to the jeweler the other day with a friend and decided to try on wrings just for fun. Turns out, not so fun. My top priority was that the shank be thin, because I'm not a fan of thick rings to begin with, but they also make me uncomfortable. So I found out that this setting has a shank thats almost 4mm wide. I wanted 2mm. the 4mm is fine if I were going to wear this ring by myself, but in a year when I wear it, it will be with another ring. Period. So I tried on bands, and the only ones that looked ok with it (nothing looked great) were a scattered diamond band about 3mm thick and a channel set sapphire band. Both of those are way out of budget for what I wanted originally anyway--which was a plain 2mm band. Not only that--but that's a good 6-7mm on my finger, and I wouldn't be able to stand that.

Here is a pic of my design... (my ghetto photoshop job is on the right, I want the profile of the top middle setting, and the split shank of the bottom middle. I don't want any diamonds--ALL metal for me). Oh and that is my stone that I photoshopped into it. Dan's stone is the top left corner.

Thank goodness I love the stone!" 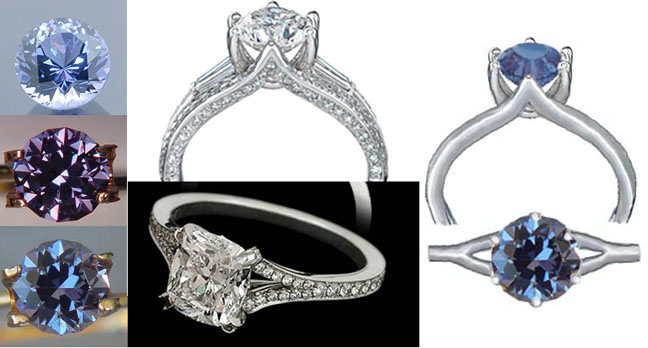 So this picture, along with every possible specification I could think of, is at my local jeweler's. I originally took it in 3 weeks ago, and they told me it would be 4-6 weeks. I called on Friday to check to see what was going on, and the benchman wasn't there (apparently his wife is in the hospital). Anyway, he stopped by work the next day, and called me then to say that the wax is almost finished and that he will give me a call when it's ready, and FI and I (or just myself knowing FI) can go by and approve it or whatever. He also asked a few questions about the stone and what ring size (he said he didn't have the paper in front of him). I'm not worried about a time frame just so long as its before next January--which it had better be!

I think thats it?

Yah Freke, I'm so happy for you

I know this has been on your mind from the very beginning so I'm super psyched for you! I can't wait to see pics of the final design...and, FWIW, I'm all about the metal too - no diamonds on my e-ring or WB either

oh freke, it''s perfect!!!
i''m crazy about split shanks...
“Friends are like cupcakes in my pantry of memories.”
- Anonymous

That is going to look cool! Love the interesting designs coming through for coloured stones! congrats on picking out your wedding bands, too!
And then a plank in reason broke... Emily Dickinson

Yay Freke, I can''t wait to see it!!
PORRIDGE

It looks great! I''m very excited for you!

Your reset is going to be so pretty and unique, Freke. I love your ideas. Do you have any photos of your sapphire eternity band? Will it be similar in color to your spinel?

Hey KB. It's actually just the sapphire eternity from Facets' Maternity line (which is kind of odd for me, but whatever! It's pretty and reasonably priced.)

I think it will go pretty well. I tried on a sapphire channel set eternity with my original ering, and the stones looked pretty good with it, even though they were pretty dark. I figure I won't wear all three rings all that much, unless it's a special occasion, so they probably won't be together most of the time anyway (gotta baby my spinel!) so it shouldn't matter too much...but they are both blue (well the spinel is most of the time anyway) so I figure it will be fine. 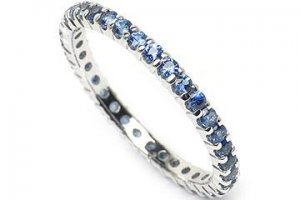 Oooh, I love that band! It''s lovely, and it looks to be similar in color to your gorgeous blue stone.

I am curious--do you have a lot of blue in your wardrobe? (I am of the opinion that blue goes with everything 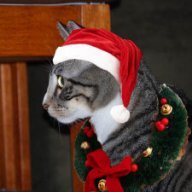 I''m fairly certain that blue is the only color she wears...

Lol KB! I do. I actually made a promise to myself that I''d stop buying black, and since then I''ve bought maybe 5 pieces of black clothing/shoes. And that was over a year ago. I tend to stick with the blue/green/purple in my wardrobe, and don''t have any orange with only 1 piece of yellow.

I also think that blue goes with everything.

I will have you know that I am currently wearing:
1 gray hoodie
1 pair of black sweatpants
1 hot pink bra
1 pair of blue undies

So you are 25% correct. Currently.